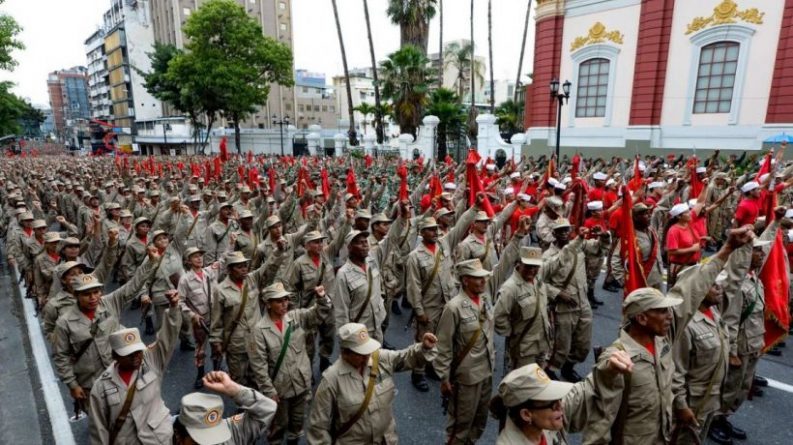 06/Abr/2019.- The military threat against Venezuela escalated in 2019 with the self-proclamation of Juan Guaidó. His “leadership”, manufactured in the corridors of the White House, is marred by the frequent indications of different emissaries of the US government, including President Donald Trump, that “all options are on the table”.

This allusion to using military force directly has been handled as a form of intimidation until now. Irregular actions of destabilization have not worn away popular support for the government of Nicolás Maduro. On Thursday, Donald Trump’s delegate for Venezuela, Elliott Abrams said: “It would be premature for the Venezuelan opposition to request an intervention because we are not considering it in Europe, Latin America and the United States.”

WHY THE US CAN NOT WIN WARS WITH MILITARY MEANS
A look at the results of the last US military operations in Afghanistan, Iraq and Syria, with heavy military costs involved, confirm the military failure of the Empire in its attempt to maintain the dominance of vital commercial spaces and its privileged position, at a time when the center of power is moving towards Russia and China. According to the American author, Stephen B. Young, the failures of the United States in war campaigns are due to the fact that it uses only the extremes of hard and soft power, namely, military and financial siege operations to directly attack a country or covert actions of the “Arab Spring” type.

Young argues that in national security policies “both hard and soft power are applied unilaterally, so the burden of success (or failure) lies primarily on ourselves.”

It is not that every point of conflict is only addressed by Americans, but that increasingly, Washington’s alliances with other political actors of the world are made in terms of subordination and orders are dictated without prior consensus. When they fail in operations, they spoil the image of unipolar power that they project in the conquered countries, culturally endangering blind loyalties.

The member countries of NATO in most cases have complied with US orders to attack countries in Africa, the Middle East and Eastern Europe, but on recent occasions, as in the approach to the siege of Iran, they have decided on diplomatic solutions.

In such circumstances, to imitate this model in the Latin American region, taking advantage of the public support of far-right factions that have installed themselves in previously progressive governments, is a reckless movement.

EURASIAN POSITION IN THE FACE OF THE DECLINE OF THE WESTERN THREAT
Once the neoconservatives resumed the main positions of power within the Trump administration, the lines drawn on the map of strategic objectives for the nation were rooted in a simultaneous escalation of conflicts.

The official communiques of taking violent roads in the China Sea, North Korea, Iran, Crimea and now Venezuela, have alternated in retaliation to the steps coordinated by Moscow and Beijing to build new ways of interacting commercially with other regions.

Both Russia and China defend themselves against the multidimensional siege of the United States by using a strengthened national identity and respecting the one they build with other nations under their own codes, offering military and commercial relations under diplomatic agreements based on mutual approval. An abysmal difference that only aggravates the US hegemony.

INTERVENTION IN VENEZUELA: PROS, CONS AND COSTS
Faced with this unfavorable geopolitical scenario for the United States, the military option in Venezuela is presented. The corporate media has contributed a large part of the analyzes that weigh the variables of a war in South American territory. They emphasize the massive rejection that this insinuation generated in international public opinion, even with the propagandized argument that in Venezuela there is a humanitarian crisis comparable to Yemen.

Neither the most obstinate countries. bent on a regime change from Chavismo, nor the multilateral organisms, intend to publicly join the affirmation. This is how Elliot Abrams, Washington’s special envoy for Venezuela, had to calibrate the war discourse, denying the development of this scenario as an immediate next action.

But the lack of global consensus or the obvious diplomatic backing of the governments of China and Russia of Venezuela are not the only factors that cause the White House to refrain. In a note published by The Guardian in January 2019, previous military interventions opened in Latin American countries were taken into account. The most immediate references are the interventions to Granada and Panama in 1983 and 1989, respectively, and then to Haiti in 1994.

In all cases, the United States embarked with a high probability of success, since it (the target) was a small country with much less relevant military training. Before these references, the portal states that “Venezuela is not Granada or Panama, the two Latin American countries invaded by the United States during the last days of the Cold War”, adding the clear differences with the Venezuelan military composition.

By reviewing only the statistical aspects, Venezuela currently has greater military proximity to the Arab region than to Central American and Caribbean countries, being even located in the global ranking of the Global Firepower website above Syria and Iraq, which defeated on the ground the mercenary groups of the Islamic State financed by the United States, besides forcing the withdrawal of their military forces installed there.

More worrisome is that Colombia is located several posts below, as it is the only border candidate who has lent its territory and its soldiers in special operations to train and monitor the terrorist cells that enter the country unlike Brazil, a country with greater proportions for war that since Bolsonaro’s rise reinforces relations with the United States, but that in his military bosom insistently rejects a military intervention.

In addition to the technological endowment of military weapons, provided mainly through agreements with Russia, Venezuela has a fabric characterized by a strong civic-military union. The failed attempts to achieve a considerable defection of the Bolivarian National Armed Forces (FANB) reveal that the United States does not overlook this factor.

An article of opinion written by Shannon K. O’Neil published by the financial media Bloomberg, explains that estimating the bulk of Chavismo by 20 percent, “it is almost certain that these people would fight against an unconventional campaign”, in case of a military intervention. A civilian aggregate, organized into social and political movements, complements the 160,000 active FANB combatants that would require the participation of 150,000 regular US troops.

The practices of multinational operations that have been developed in the Latin American region are not guarantee of advantages either. In recent years, the Southern Command of the United States has increased military exercises around Venezuela. This is the case of the “Vientos Alisios” (with the participation of Caribbean countries) and the “Operation America Unida” (in the triple border of Brazil, Colombia and Peru) both developed in 2017 under the assumption of handling disaster situations.

Despite this, the countries involved maintain their reluctance to armed conflict, because they do not feel prepared militarily to face a scenario similar to that of Iraq, recognizing that the campaign would last for years.

On the other hand, the effects of a massive wave of migration unleashed by the invasion is not a matter of indifference to the political leaders of Washington, being so close to the point of conflict.

Taking into account the migration policies that the United States implemented against the Venezuelan economic migrants between 2017 and 2018, denying them political asylum and deporting them in some cases, it is unlikely that in a hypothetical case of exodus they will be willing to provide logistical support to refugees from war.

Other contradictions come to the surface. The Guardian warns that “If Syria is a point of reference, then supporting one million refugees will cost between 3,000 and 5,000 million dollars a year.” Up to now, less than 70 million dollars have been disbursed to finance humanitarian aid.

Precisely the management of all these variables, motivates that parallel to the pro-war discourse of the United States, Canada emerges to lead diplomatic actions that support the fictitious government of Guaidó in the region, compensating for the lack of push left by the push to open confrontation.

The ineffectiveness of soft coup methods (entrusted to local antichavismo figures) to connect with Venezuelan society in the destabilization raids of 2014 and 2017, was derived from the anarchy and ungovernability that prevailed in the areas where the government was in disadvantaged. The experience of those moments of extreme violence, moved undecided sectors towards the proposals of return to the peace that the Venezuelan State knew how to place on the table.

That now Juan Guaidó, commercial face of foreign interference, openly exhorts military intervention, makes it difficult for unconventional operations to catalyze the discomfort caused by sabotage to basic services and transform it into violent protests that cover the infiltration of armed groups, emulating the previous color revolutions.