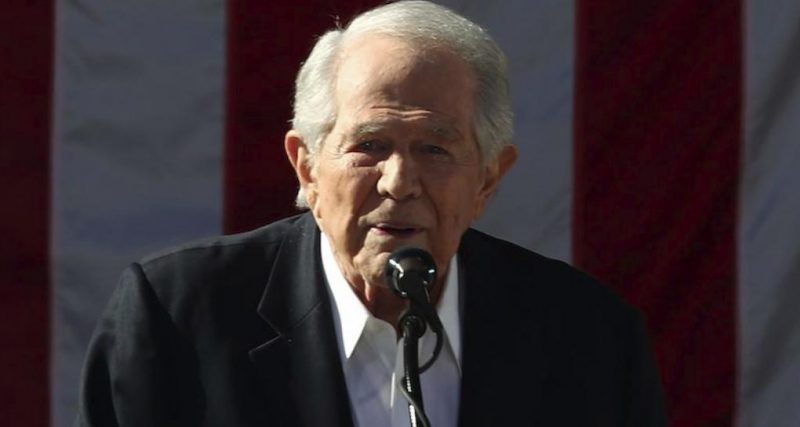 The 89-year-old right-wing Christian televangelist Pat Robertson has called on the United States to assassinate Venezuelan President Nicoals Maduro with a drone strike.

As Donald Trump has escalated his rhetoric condemning Venezuela’s President Nicolas Maduro, as well as calming economic sanctions on the country and recognizing Maduro’s opposition leader Juan Guaidó as the country’s president, as NBC News reported, a top right-wing American Christian evangelical leader called on the United States to assassinate Maduro with a drone strike.

Eighty-nine-year-old Pat Robertson, the longtime chairman and top on-air personality on the Christian Broadcasting Network, took to the CBN airwaves on Thursday to issue the call for Maduro’s killing, using U.S. military technology, as posted on Twitter.

“It’s time for action,” Robertson said, calling on the Organization of American States — the regional body consisting of 35 North, South, and Central American countries — to stage an assassination of the 56-year-old Maduro, who has ruled Venezuela since 2013.

“It may be it needs the Americans to lead it, but I could see, we have very effective drones,” Robertson said.

“We have what are called Hellfire Missiles, they could be fired from drones. And I believe it’s time to give Mr. Maduro a little taste of what he’s been doing to the opposition.”

But Robertson’s call to kill Maduro by a “Hellfire Missile” drone strike was not the first time that the televangelist, who ran for the 1988 Republican presidential nomination, had implored the U.S. to assassinate a Venezuelan leader, according to The New York Times.

In 2005, Roberston also suggested that the United States assassinate Maduro’s predecessor as Venezuela’s president, Hugo Chavez, saying, “If he thinks we’re trying to assassinate him, I think that we really ought to go ahead and do it. It’s a whole lot cheaper than starting a war.”

Though Maduro blamed the assassination-by-drone attempt on “terrorists” working in concert with the governments of Chile, Colombia, and Mexico, according to Reuters, the CNN report noted that an organizer of the attack gave an interview to the network, in which he said that the assassination attempt was carried out by defectors from Venezuela’s military that held meetings with US officials.

Opposition leader Guaidó, however, said -at the time- that he suspected that the Maduro government had staged the attack itself, in order to make Maduro and his supporters “look like victims,” according to CNN.