Today is the 30th anniversary of the downing of Iran Air Flight 655 by an American vessel.

This article was first published on July 2, 2018, to commemorate the 20th anniversary of the downing of Iran Air Flight 655 on July 3, 1988. Having found no evidence, Western powers continue to blame Russia for the downing of Malaysia Airlines Flight MH17. Virtually erased from record are incidents like the blatant 1988 shooting down of Iran Air Flight 655, by a decorated American warship.

On 3 July, 1988, Iran Air Flight 655, flying from Tehran to Dubai, was shot down by the USS Vincennes, a huge United States missile cruiser. All 290 people aboard the Iranian airliner were killed, including 66 children, and 38 people of non-Iranian nationality. The Vincennes was rewarded shortly after for this act of mass killing, having received presidential honours upon return to American shores.

Almost 30 years ago, the large civilian aircraft was shot down over Iranian territorial waters, on its normal flight path. In doing so, the Vincennes had illegally incurred into Iranian territory before firing two surface-to-air missiles at the ascending airliner, both direct hits. US President Ronald Reagan described the killing of almost 300 civilians as “a proper defensive action”. The heavily armed warship, it seems, was in mortal peril at the hands of the unsuspecting passenger plane.

“I will never apologise for the United States – I don’t care what the facts are… I’m not an apologise-for-America kind of guy.”

RELATED CONTENT Who Targeted Ukraine Airlines Flight 752? Iran Shot It Down But There May Be More to the Story

Bush also said that it was “just an unhappy incident” and “life goes on”. It seems implausible that “life goes on” for the families of the victims, or indeed, for the 290 who lost their lives.

While there is irrefutable evidence the Iranian aircraft was downed by US forces, the missile that destroyed Malaysia Airlines Flight MH17 was “not fired by Russian soldiers”. As a result, the taking down of the Malaysian aircraft on July 17, 2014, killing 298, cannot be directly linked to the Russian military, even by the White House.

In fact, “no suspects have been named” over three years later. The absence of evidence did not prevent the European Union from joining the US in imposing sanctions on Russia, just weeks after the Malaysian airliner was destroyed. Glance back in time and we can see that the double standards and hypocrisy of the West are striking. The EU failed to impose sanctions on the US when its naval ship destroyed the Iranian airplane in 1988, despite overwhelming proof. This is hardly surprising, considering the EU has shamefully performed its role as a virtual US client entity for decades.

In June this year, the EU imposed further sanctions against Russia in relation to the Western-initiated conflict in the Ukraine. Again, there is no record of the EU placing economic measures on the US when the superpower (with allies) illegally intervened in Iraq, Afghanistan, Libya, and so on.

According to US government sources, the Vincennes mistook the Iranian Airbus A300 (177 feet long) for an F-14 Tomcat fighter (62 feet long), an American-made warplane used by the Iranian Air Force. This pretext falls further to pieces upon examination of the vastly different flight shapes of the respective aircraft: one a passenger plane, the other a fighter plane designed for stealth.

RELATED CONTENT Was the Shootdown of the Ukrainian Airplane Near Tehran Intended Screw-Up or ‘Mistake’?

The Vincennes’ captain, William C. Rogers III (image on the right), received the prestigious Legion of Merit award two years later for his “sterling performance without a blotch of tarnish”, and “his heroic achievement as air warfare coordinator in USS Vincennes on July 3, 1988”. The Vincennes’ entire crew were also awarded the combat-action ribbon. 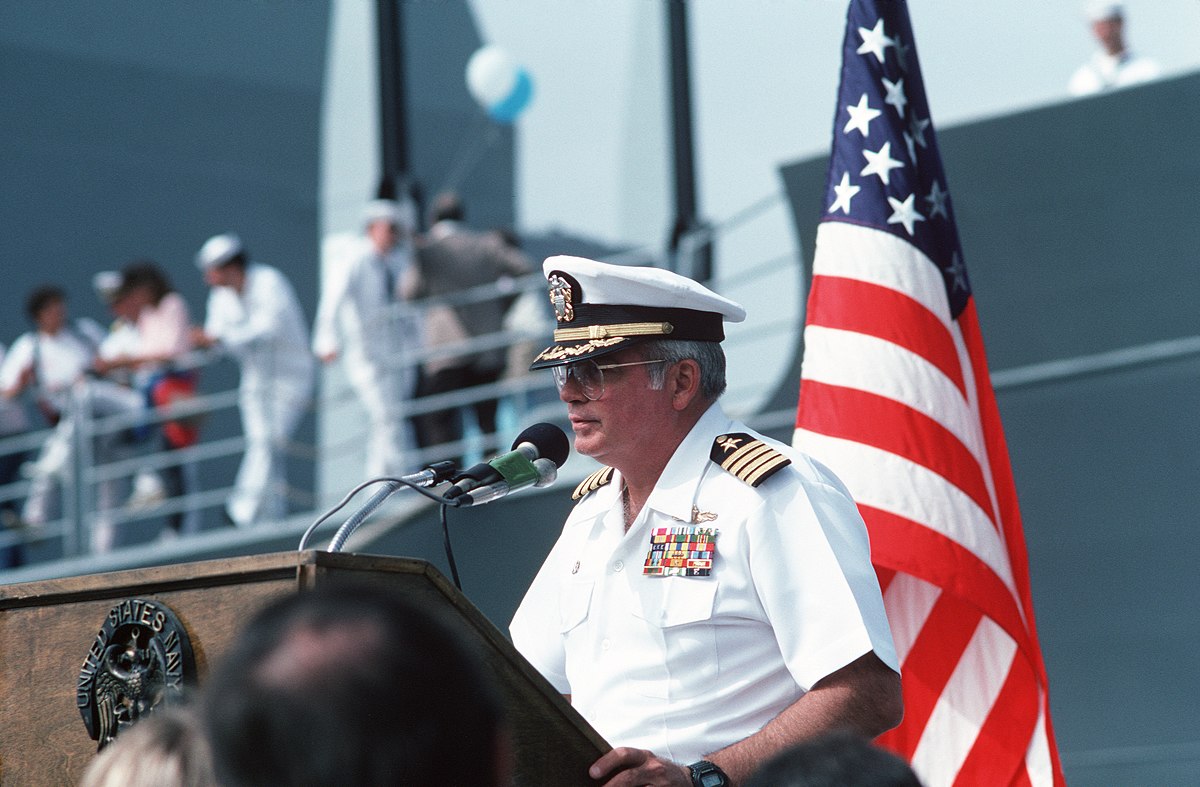 Imagine the hysterical global reaction had the Russian (or Soviet) leadership behaved in such fashion under similar circumstances. When the US commits a heinous crime, then commends itself afterwards, the muted reaction across the West is something to behold.

The background to this forgotten war crime may prove insightful. The Iranian airliner was blasted out of the sky near the end of the Iran-Iraq war (1980-88), in which hundreds of thousands died on each side. President Reagan had been strongly supporting Iraqi dictator Saddam Hussein, following the 1979 Iranian Revolution in which the US had “lost control” of Iran.

To the present day, the US government has refused to apologise for the incident, despite being compelled to pay over $130 million in compensation (under the Clinton administration). The mainstream media in the US, as usual, played a key role in downplaying the aggression, ensuring it remained largely concealed from the American public’s view.

Two days after the Iranian airliner’s shooting down, the New York Times (“paper of record”) asked its readers to put themselves “in Captain Rogers’s shoes”. The Times’editors called it “an accident” and that it was “hard to see what the Navy could have done to avoid it”. If we believe the Times, then, it was difficult for trained navy personnel (with radar) to distinguish between a near 180-foot long passenger plane, and a fighter plane a third of that size. In fact, the Vincennes’ Aegis radar system was “the most technologically advanced in the world” at the time. It was also designed to “track scores of incoming missiles and aircraft in a major sea battle”.

On the 25th anniversary of the tragedy in 2013, Max Fisher of The Washington Post stuck dutifully to the line that the Vincennes mistook the large civilian aircraft for the F-14 fighter – as it “exchang[ed] fire with small Iranian ships in the Persian Gulf”. Fisher excused the Vincennes’ war crime as having been in “the heat of battle”, and that “the horrible incident brought Tehran closer to ending the war”. A war started by Hussein’s Iraq with vital American support.

This article was first published on The Duran in August 2017