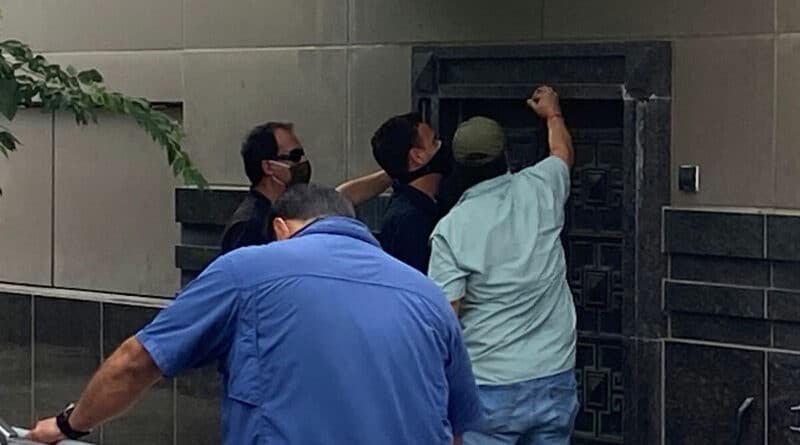 The incident took place just 40 minutes after the eviction deadline ordered by US President Donald Trump, citing the need to “protect American intellectual property” from China, who the White House accused of espionage activities.

July 25, 2020.-  US officials have “taken over” the Chinese consulate in Houston, Texas, after the staff was evicted, the Houston Chronicle reported on Friday.

According to the newspaper, a group of officials, including a man allegedly working at the State Department, pried the consulate’s small back door open after they failed to get in through the other three entrances. It added that there were security men wearing shirts with “State Department” labels on them.

RELATED CONTENT: China Retaliates: Notifies Washington of the Closure of US Consulate General in Chengdu

​Prior to that, police were seen setting up barricades around the consulate.

China has strongly protested the “forcible entry” of US officials in the Chinese consulate in Houston after it was vacated by the diplomatic staff, a Foreign Ministry spokesman said Saturday.

“China has expressed strong opposition and a firm protest against the forcible entry of the US side in the territory of the Chinese consulate general in Houston,” Wang Wenbin said in a statement, adding Beijing would take further action.

The Foreign Ministry spokesman argued that the consulate was the state property of China protected by the Vienna Convention on Consular Relations and a US-Chinese agreement.

On Wednesday, the US State Department confirmed to Sputnik that it had ordered China to close its consulate in Houston in two days over accusations it was engaged in massive illegal spying and influence operations in the United States.

China has denied the accusations and criticised the United States for various violations of international law. China also said the United States has been inciting hatred toward Chinese nationals, resulting in multiple threats made to its embassy in Washington.

In response, China’s Foreign Ministry announced that it had ordered the closure of the US Consulate-General in the city of Chengdu.