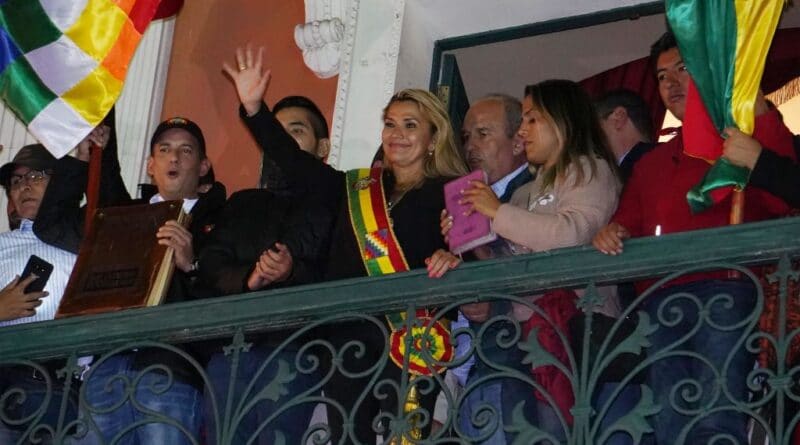 An interview with Vidal Gomez

Luis Arce is far in the lead in polls for Bolivia’s repeat election, after his MAS comrade Evo Morales was overthrown in last November’s military coup. The postcoup regime has attracted almost no popular support — the question now is whether Bolivia’s right will even allow free elections to take place.

Eight months since the military coup in Bolivia, right-wing leader Jeanine Áñez’s “transitional government” has done little to establish its legitimacy — among Bolivians, that is. Though she enjoys the favor of the Trump administration and figures like Venezuelan opposition leader Juan Guaidó, Áñez currently languishes in a poor third place in polls for the re-run election slated for September 6, enjoying just 13 percent support.

The most recent polls suggest that Movement Toward Socialism (MAS) candidate Luis Arce is set to score 42 percent in the first round, showing the continuing popular support for ousted president Evo Morales’s party. The question now is whether the forces who orchestrated the military coup will allow free elections to go ahead — with far-right leader Luis Fernando Camacho complaining to the Organization of American States that MAS’s bases of influence should be uprooted first.

Vidal Gómez was part of a new generation of political actors in Morales’s government. Today, he is the president of the Plurinational Youth Council, delegate to the Central Obrera Boliviana (COB), and president of the Intercultural Youth. His political career began in the coca fields and agricultural area of the Yungas, organizing union activity among young people and producers in his region. He spoke to Anton Flaig about the situation in postcoup Bolivia, ahead of the planned elections.

RELATED CONTENT: “We Will Coup Whoever we Want”: Elon Musk Sparks Online Riot With Quip About Overthrow of Bolivia’s Evo Morales

AF
After the electoral crisis in Bolivia, in October–November 2019, many spoke of a coup and publicly denounced an atmosphere of political persecution. What do you think?

VG
Yes, all representatives of social organizations have suffered from political persecution. They have been repressed, not only by way of outright massacres, but also through judicial measures and threats from the minister of government, Arturo Murillo.

The social organizations have fought for a date to be set for the elections and for us to have a democratically elected government. But because of this they have been repressed by Murillo. He repeatedly threatened the president of the senate [Eva Copa, from Morales’s MAS-IPSP], social movement leaders, and even young people who publish criticism of the government on social networks.

Indeed, Murillo ordered the arrest of a young man in Santa Cruz just for being in MAS WhatsApp groups. I am also in more than ten such groups, and I could have been arrested, but there are still no trials. We have seen that 90 percent of the media are allies of the transitional government, which is also using the pandemic to extend its mandate, unconstitutionally, so that there are no elections. They do not want the party of social movements — that is, the MAS-IPSP — to succeed.

AF
COVID-19 was the perfect excuse for Jeanine Áñez’s authoritarian government and the Supreme Electoral Tribunal (TSE) to postpone the re-run elections from May 3 to September 6. Apparently Áñez’s de facto government does not want elections and intends to blame MAS-IPSP for public health problems. Do you think the elections will be held in September?

VG
The TSE has already given a date, September 6. Social organizations and youth are hoping that the electoral tribunal can be an independent body. We are seeing that the formula used by the transitional government is to apply threats.

They did this through a letter to the president of the Senate accusing her of doing more than her powers allow. Yet they also asked her for a health and biosecurity report for the elections. These are things that the president should do. But instead, Áñez dodges them and passes the ball to us — the social movements — blaming us for not taking the steps they should be taking.

Áñez must understand that we can bring down any coup government. We ask her to reconsider and avoid subduing a united people, a people with conviction, a people that wants better days for Bolivia.

AF
This unity had seemed in doubt until the former minister of economy Luis Arce Catacora was chosen as the MAS candidate for the presidency. How would you measure the support for Luis Arce and his vice presidential candidate David Choquehuanca?

VG
We believe that many young people viewed Evo’s government as having gone on and on, even though they also applauded his works. They had believed that with a change in government, perhaps better days would come for Bolivia. But now, they have returned to the MAS-IPSP, in search of economic stability, real measures to cope with the pandemic, and because of the closeness that the MAS-IPSP had with the people.

We see that the president has not even visited the nine departments of Bolivia. She has barely even visited the municipalities, apart from some in Beni [Añez’s own home state] and Santa Cruz. It demonstrates how she only works for the interests of a small economic elite. The Bolivian people expected the transitional government to call elections, but every day it takes actions that do not correspond to this expectation. The people have waited peacefully but have also made their feelings known.

All Bolivians want good management of the economy. And they know that the MAS-IPSP is the party that knows how to manage the economy well, with Luis Arce along with brother David Choquehuanca, the former foreign minister.

AF
The de facto government has signed contracts for $1.2 billion. Do you know about the possible IMF conditions, such as a devaluation of the Bolivian peso or the elimination of the Ministries of Communication, and Culture and Tourism? This seems particularly out of place considering that Bolivia is known worldwide for its multiculturalism.

VG
The subject of culture and art is, indeed, being affected by the changes in the ministries that have been abolished. But we are sure that following the elections, the Bolivian people will restore these ministries.

Not only is money being borrowed from the World Bank and IMF, but it has not been explained what all the money is being spent on. Even health care funds are being stolen. The ventilators that arrived are barely of any use and cost more than $20,000 each. Right now, the Bolivian people are waiting for the date for the elections. There, Bolivians will decide who will be our president, who will take the Plurinational State of Bolivia forward.

VG
Not just the COB. Also, the social organizations, the neighborhood councils, the vast majority of the Bolivian people are in an emergency — simply waiting for the elections. If the de facto government continues its corrupt acts, remains in power, and seeks to remove the legal status of the MAS-IPSP, rather than going ahead with the elections, the Bolivian people will rise up. This means taking the measures that we have always proven able to take, in order to advance our struggles and demands.
AF
Now the MAS-IPSP is ahead in the latest polls with about 40 percent and in the face of the economic crisis, former minister of economy Luis Arce seems an ideal candidate. That will be the vision of the campaign?

VG
Our best campaign manager is this transitional government. Because they cannot manage a country. The corruption, the health crisis, the economic crisis, and the political-social crisis that we are experiencing are clear examples of their incompetence.

We want, based on the work of Evo’s government for fifteen years, to restore economic stability — with Luis Arce as the symbol. Our middle-class brothers also want this stability and a good management of the economy. And they know that the MAS-IPSP is the party that knows how to provide this.

About the author
Vidal Gómez is president of Bolivia’s Plurinational Youth Council and delegate to the Central Obrera Boliviana.

About the interviewer
Anton Flaig is the organizer of the Wiphala Movement Germany and a student of political science and sociology.