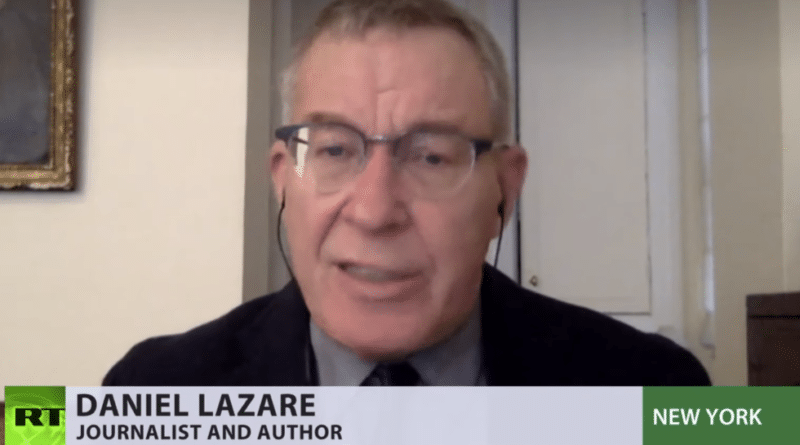 American journalists are being threatened with large fines by the US Treasury for writing for the ‘wrong’ websites, writer Daniel Lazare told RT, concerned his country’s reputation as a defender of press freedom might be over.

Lazare and other US journalists who’ve written for the Strategic Culture Foundation, a website that describes itself as a “research platform on Eurasian global affairs,” recently received threatening letters from the Treasury Department warning they could be on the hook for at least $300,000 in sanctions penalties, he told RT on Sunday.

“It’s impossible to battle the US Treasury in this kind of case,” Lazare said, pointing out that the Treasury’s power was “enormous,” while “that of an individual freelance journalist is microscopic.” Citing the “chilling effect” of merely receiving such a document, he pointed out that few journalists would even acknowledge being thus targeted, never mind coming forward to do an interview about it, as he had.

RELATED CONTENT: The Most Vital Battle for Press Freedom in Our Time

Washington had targeted the website and several others with a round of sanctions in April, claiming it was involved in election interference, controlled by Russia’s foreign intelligence service, SVR, and connected to the Russian Foreign Ministry – a claim the foundation denies.

Lazare was most concerned about the precedent such heavy-handed tactics set for the US’ once-staunch defense of the right to a free press, which is enshrined in the First Amendment to the Constitution and had previously been upheld in the courts.

“To stop journalists from writing for these kinds of websites is a new step,” he said. “I was surprised, because the United States, in fact, has a very good track record when it comes to a free press. In America, we can say anything we want,” he continued, noting that he could mock current and former presidents “and not have to worry about the secret police crashing through my door.”

“But now things may be changing slightly – and that doesn’t augur well.”