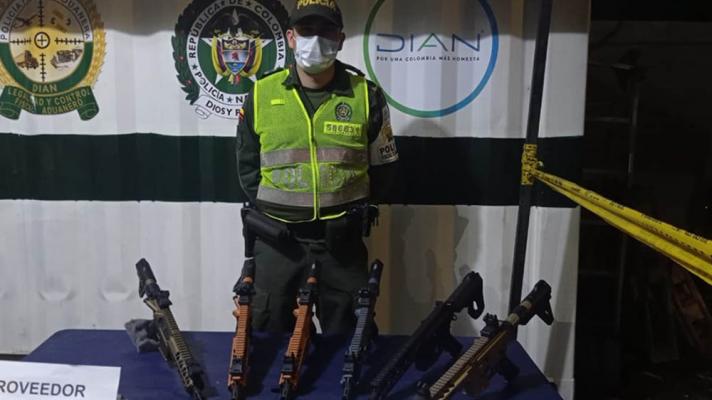 A shipment of US-made war weapons and supplies was seized by Colombian police authorities on the Troncal del Caribe highway in the Yé de Ciénaga sector of the department of Magdalena, Colombia.

Six Anderson AM-15 rifles and seven 5.56-caliber ammunition supplies were being transported from Bogotá to Riohacha, a city in the department of La Guajira, bordering Venezuela, according to the commander of the Metropolitan Police, Oscar Solarte.

A shipping company must have been in charge of the arms trafficking. When making a stop at a police check point in the Yé de Ciénaga sector, the cargo vehicle was subjected to inspection. The rifles and supplies were hidden in “a box with used clothes, newspaper and plastic,” informed the police.

The authorities in charge have not released further information about the operation. However, Reuters news agency published that a person familiar with the case said that “it is believed that a male suspect was waiting to receive the weapons and the police are investigating whether the planned destination of the armament was Venezuela.”

Riohacha is the place that anti-Chavismo forces (backed by Colombian President Iván Duque) chose as a training center for paramilitary groups to attack the government of President Nicolás Maduro and the Venezuelan population in general. Many of those plans have been dismantled by the Venezuelan security forces before being executed, with Operation Gideon (a plan that included US mercenaries authorized by the Trump administration to assassinate President Maduro) being the most relevant due to the resources and protagonists employed.

Featured image: The discovery of the long-range weapons was made at a checkpoint in the Yé de Ciénaga sector. (Photo: National Police of Colombia).