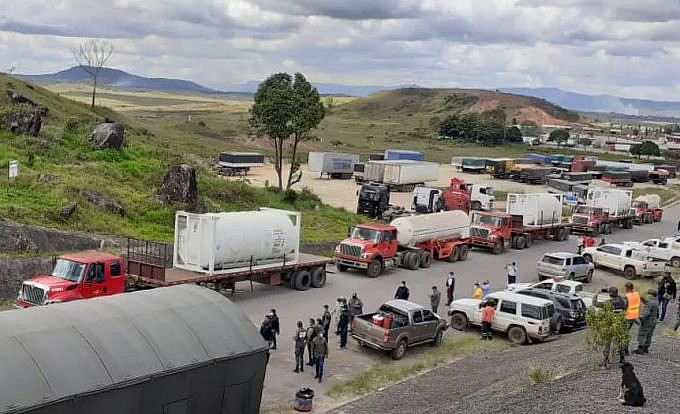 After crossing the border between the two nations on Monday, authorities confirmed the arrival of a convoy of Venezuelan trucks loaded with hospital oxygen in Manaus, Brazil.

The governor of the Venezuelan state of Bolívar, Justo Noguera Pietri, delivered the oxygen in the border territory to the senator of the Brazilian state of Roraima, Telmario Motta. The latter highlighted the significance of this gesture of solidarity.

Pietri affirmed the Venezuelan government’s willingness to continue providing aid to Brazil, as long as it needs it. The donated supplies will be used in the fight against COVID-19 in the Amazon region.

The convoy of six tanker trucks with a capacity of 136 thousand liters, equivalent to 14 thousand individual cylinders, must continue its way to the city of Manaus, in Amazonas, which is going through a healthcare collapse due to the coronavirus crisis.

The city of Manaus suffered a hospital collapse due to the increase in cases of coronavirus. Manaus registered a record of oxygen consumption for patients with respiratory deficiencies, which went from about 5 thousand cubic meters per day to 76 thousand.

Brazilian health authorities have been forced to refer patients to other states due to the crisis. Last Sunday the president of Venezuela, Nicolás Maduro, had announced that the cargo had left the country and was on its way to Manaus.

“We are sending necessary humanitarian support to Manaus. We have extended our hand in solidarity to the people of Brazil. They should know that to the best of our ability we are willing to support them,” said the Venezuelan president.