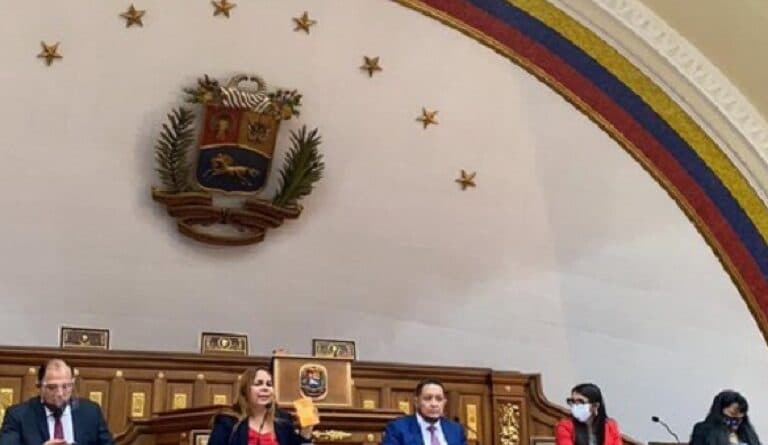 During the swearing-in ceremony of the Special Commission to Investigate Actions Perpetrated against Venezuela by outgoing deputies (2015-2020), the first vice-president of the National Assembly of Venezuela, Iris Varela, urged this body to exhort the Judiciary to execute arrest warrants against Juan Guaidó and his accomplices within a period of 48 hours.

She also proposed to demand an answer from the Public Ministry on why to date it has not responded to calls to apply measures against the deputies of the outgoing National Assembly, presided over by Juan Guaidó, for alleged criminal misdeeds and usurpation of office.

RELATED CONTENT: New Venezuelan Parliament: In One Month Those Responsible for Political Instability and Looting of Assets Should be Behind Bars

“Why have they not proceeded to arrest these criminals who committed flagrant violations of the laws of the land?” demanded Varela. “I believe that 48 hours is a reasonable period of time for them to proceed to issue arrest warrants against these people and for the Commission to continue its investigation, because this has to be documented. All the damage needs to be documented. This Special Commission must provide a political, economic and social response to the Venezuelan people who have suffered so much from these irresponsible people who do not love their own country,” said the first vice president of the National Assembly.

“If we are not capable of exhorting the Judiciary to comply with what it has to comply with, then put us in prison,” continued the deputy. “I do not want to be an accomplice of those criminals. I am a deputy of a new parliament. Of the honorable National Assembly of the Bolivarian Republic of Venezuela, like all of you. Let justice be done, because if we do not exercise the rule of law, we would weaken our institutions. We would end up doing that through our inaction. Who tells us not to do what we have to do?” she wondered. “Everyone is waiting for action. We are here for what we have to do,” she said while swearing in the members of the special commission.

The Special Commission to Investigate Actions Perpetrated against the Republic by outgoing deputies will be comprised of the deputies:

For his part, José Brito, president of this Special Commission, reported that the agency is to be declared a permanent session. During the plenary session he highlighted the importance of starting the hearing process next Monday, so that within a maximum period of 30 days, the corresponding report can be presented. He assured that due process and the sacred right to defense will be respected in these investigations.