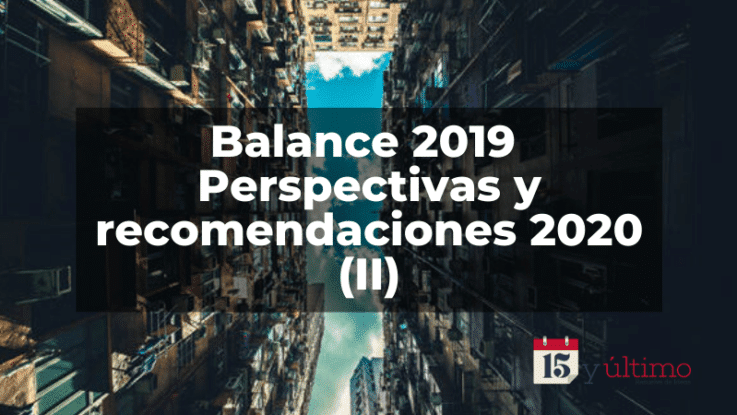 In the first part of this work we stated that 2019 will be for history the year of the transition. What we are not sure of is the direction of that transition. But what we can say is that the economic model established since the 1999 Constitution has been dismantling itself – or in any case mutating – before our eyes.

We also said that it is a complex transition, because although at first it was external forces -hostile to Chavismo- who had promoted and claimed it, now it is the Chavusta government itself – continuing the legacy of the Chavez era – who conducts it. Even further behind are figures such as the “intervening state” or flags such as “good economic governance,” the latter even raised by the current administration. There is no longer price or exchange rate control; State enterprises have been privatized and others partially privatized. There is also more open talk about “delivering” the management of public services to private parties. The issue of socialism is only stated in a few public appearances, usually in the heat of some necessary harangue when the conflict intensifies. Not to mention the communes or the EPS (Socially Led Enterprises).

But the issue here is that all this transition led from above, collides with two realities difficult to ignore. One is the serious economic crisis that has seized the country for at least seven years, a crisis that we describe extensively in the first part, but which we can summarize in the loss of two thirds of GDP in the middle of a brutal price and exchange rate run, exacerbated by a commercial and financial blockade.

And the other, closely related to the previous one: the intensity of a political conflict that reached very high temperatures in 2019, ranging from failed coup attempts to threats of military invasion, passing through civil war scenarios and the installation of a parallel fascist government.

In this sense, the great achievement of the government during 2019 was undoubtedly to conjure up all these attempts. And in fact, not only to defeat them but to disrupt the internal coup-plotting opposition, to the point that at the beginning of this 2020, for the purposes of the election of the Board of Directors of the National Assembly (a spurious election, to the extent that said body is currently in contempt and therefore its acts are void of legality), it succeeded in giving a thrust when a candidate other than Juan Guaidó was elected, who from the presidency of the AN pretended – and in fact still intends – to continue exercising a “parallel” presidency of the country, proclaiming himself as such in January 2019.

A strengthened government, a disrupted anti-Chavismo

So, from a political point of view, the question that needs to be asked is what will come of this. Opposition forces clearly appear weakened and disjointed. But we must bear in mind that it is not a mere set of political parties or factions of power but a historical block, heir of the one which consolidated the “puntofijista” era (the fourth republic) and whose political expression is precisely parties such as Popular Will, First Justice, Vente Venezuela and Accion Democratica (founder and main protagonist of “puntofijismo”), but which also has a powerful economic-business class that has been at the forefront of the fight against Chavismo and whose transnational ties are not to be disdained.

RELATED CONTENT: 2020: These are the Likely Scenarios for Venezuela

What we mean is that we are not facing a simple dispute over the command posts of the political and economic life of the country and not even over the preservation of this or that model: we are facing the possibility of a true historical breakdown, which would mean the disappearance of one ruling class and its displacement by another. These breaks are usually traumatic and this one has not been minor. But as a rule, they have always been settled by some kind of armed confrontation, which has not been the case now beyond threats, feints and skirmishes. Unless we assume that “economic warfare” and “fourth generation war” as the warlike form of the current break.

As we have stated on previous occasions, the weaknesses of the government and the current leadership of Chavismo at this juncture seemed to be two: the first, not having an economic class strong enough to displace the traditional ruling class in this area. And the second, the declared enmity of the US government, always the main star and ultimately the decision-maker of Venezuelan political life throughout the twentieth century.

Having defeated the heirs of the traditional political class during 2019 (which does not mean that they cannot re-articulate), everything indicates that, in addition to promoting their own economic class through that ambiguous discourse that mixes entrepreneurship with revolutionary bourgeoisie, the government strategy moves to tame and seduce the old economic actors with practices that range from discretion in certain sensitive decisions (in exchange rate matters, for example) to the lifting of controls, not only of prices and exchange rates, but in general, of any kind of regulation, including tariffs (currently almost no import tariffs are paid), sanitary controls (compulsory permits are also exempted) and of course monetary ones, by whose uprising we now know openly what the government’s position has been from the so-called “dollarization”: a “laissez faire et laissez passer” that has as its goal that the economy “self-regulate”.

And what about the Blockade?

If it finally is able to achieve this, what remains is to solve the problem of sanctions and the relationship with the US government. On the surface, everything indicates that sanctions and blockade should escalate. However, there are also indications to the contrary: the increase in oil exports at the end of 2019, for example, and even the current exemptions or licenses to the blockade in food matters, which due to their low specificity allow the dollarized supply of the current very trendy “bodegones” (grocery stores offering mostly imported food) and other similar spaces. For the rest, the hitherto cold and almost pro forma response of the US government to the displacement of Guaidó from the presidency of the National Assembly may be an indication of the relaxation of tensions, due to the fact, speaking globally, the same is focusing on the Middle East and specifically on Iran.

However this may be, everything seems to indicate that at the moment the government will continue in its line of economic “self-regulation”, assuming a transition towards an open market economy and unlocking the political conflict, for which it has the already manifest support of the new National Assembly board of directors. How that will be expressed politically is definitely to be seen. Among other things, it depends on whether the traditional opposition leadership is able to re-assemble and raise the necessary support to return to the dispute. Meanwhile, the new political goal focuses on parliamentary elections, for which the government clearly starts with an advantage given the opposition disaster.

And then, what can we expect economically from 2020?

By virtue of all the above, and taking into account the fact that during this 2020 the political agenda will score the economic one as it has been in recent years, our main economic projections for this year that has just begun are the following:

In general, we think that unless the political situation goes off course (with the theme of the new board of directors of the AN, for example), the economic movement during the first quarter of 2020 will be between a bust and a forced landing since the Christmas bubble (which set many irresponsibly to talk about “recovery”) and the efforts of the government to maintain this sense of recovery with a view to the parliamentary electoral scenario, which apparently can occur in March. On this particular point, it is worth considering that the situation in the Middle East can play in its favor, if the conflict is complicated by generating a run on oil prices.

We also think and for the same reasons that for what the government plans to do in monetary matters and specifically with the petro, it will seek to take advantage of the first quarter. For all other more complex and expensive things (rate increases, etc.), it is most likely to postpone decisions after parliamentary elections.

In this sense, the key for this 2020 for us -the ordinary people- is in trying to take advantage of this first quarter. Not only because of the above, but also because in such uncertain scenarios it is advisable to take the lead and anticipate. Uncertainty should not be an excuse for not planning. But we must fight hard so that the uncertainty – which is real and not up to us – does not turn into anxiety. Let’s move forward as much as we can, taking advantage of the wave, at least in personal economic and financial terms. As for the other macro things – the national economy, political life, etc., – we must seek to regroup and organize, because ultimately the individual exits are nothing without the collective ones. But about all these things we will talk in the third part of this work,