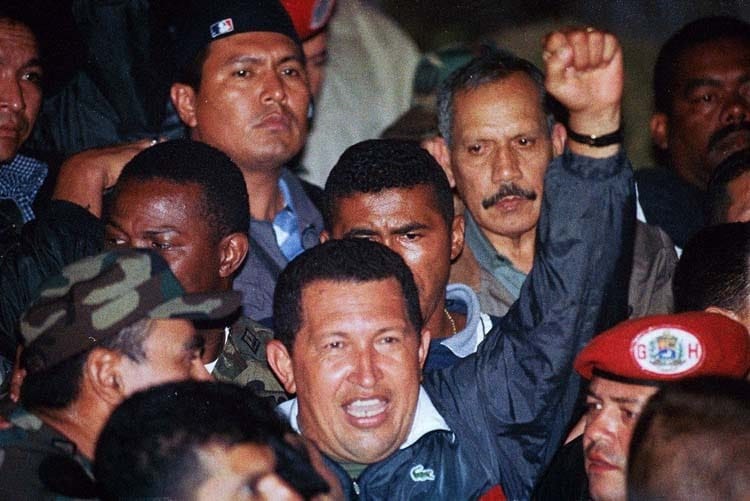 April 11, 2022 is the 20th anniversary of the coup d’état that in 2002 removed President Hugo Chávez Frías for 48 hours from the government of the Bolivarian Republic of Venezuela. In a heroic deed, and in record time, the people and the Bolivarian Armed Force rescued the Venezuelan president and restored democracy in the country. An event that many compare to October 17, 1945 in Argentina, when the people took to the streets to force the de facto government to free Juan Domingo Perón. Both were founding processes of two of the largest popular movements in the region, Peronismo and Chavismo.

To reflect on how the coup against Chávez took place and what the coup and the subsequent popular uprising that restored him to power meant, Diario Contexto spoke to Stella Calloni, a journalist who knew the Venezuelan leader very well. Between 1994 and 2013, Calloni interviewed Commander Hugo Chávez 11 times: after his release from prison after leading a popular uprising; as a candidate; as president. She even talked to the Venezuelan leader on April 11, 2002, when Chávez, still in Miraflores Palace, assured her, in contrast to the story already circulating in the hegemonic media: “I have not resigned. What is happening here is a coup d’état.”

The interview is presented below.

How did Hugo Chávez became this great leader?
It must be remembered that Chávez was a leader who appeared in the public scene in 1992, with a civic-military uprising against the neoliberal model of the Venezuelan president at that time, Carlos Andrés Pérez. An uprising that the media wanted to show as an attempt of a coup d’état.

In contrary, this uprising was a product of the popular uprising of 1989, known as El Caracazo, which was the first popular uprising against the neoliberal model in Latin America. On that occasion, the government of Carlos Andres Perez ordered a repression and a massacre took place, which filled with indignation the young people of the military, among whom was Chávez.

That is why in 1992 that uprising took place, which was defeated, and Chávez ended up in prison for leading it, but he became the great referent of all the oppressed of Venezuela and, after his release from prison, Chávez won the 1998 elections with a resounding victory.

When Chávez took office as President, the re-foundation of Venezuela began, and for this purpose, a process to write a new Constitution was carried out.

The policies promoted by Chávez reverted the totally unjust model. Venezuela was a very rich country, but before Chávez, the wealth generated from the sale of oil remained in the hands of a few and most Venezuelans lived in poverty. The oligarchy, allied with the United States, got rich and the majority of the people lived in misery. Chávez reversed this and for this reason he was always in the crosshairs of the right wing, which immediately started to attack him.

How did the coup and the popular reaction unfold?
In the context in which the coup d’état of April 11, 2002 took place, it was a media-military coup. This is very well described in the documentary The Revolution Will Not Be Televised, which shows the role of the media and the United States in that coup.

That day all the information that was coming out was very biased and the hegemonic media spread the version that Chávez had resigned. The media correspondents in Caracas did not know what was going on. After insisting through different channels, I managed to communicate with the Miraflores Palace [the seat of the presidencyof Venezuela] and I could speak very briefly with President Chávez who told me: “Stella, I have not resigned. This is a coup d’état.” We, at La Jornada of Mexico, were the first to announce that it was a coup and that President Chávez had not resigned, nor was he going to do so.

RELATED CONTENT: President Maduro at International Summit Against Fascism: We Have Lived 20 Years of Resistance after April 11 Coup

When the coup took place, Chávez was taken to the Orchila Island Military Base, and Pedro Carmona was sworn in as president, who belonged to Fedecámaras [Venezuelan chamber of commerce], a representative of the Venezuelan oligarchy that responded to the interests of the United States.

It was incredible, extraordinary. In the poor neighborhoods of the outskirts of Caracas, people began to rise up, to call with megaphones and with the new Bolivarian Constitution in hand, to go out to defend democracy and their President Chávez.

It was a social uprising comparable to October 17 [1945] in Argentina. Millions of people from the poor neighborhoods took to the streets of Caracas and surrounded the Miraflores Palace. At that moment, the democratic military loyal to Chávez joined the popular rebellion, took back control of the government, and a squad of paratroopers went to the island where Chávez was being held and rescued him. April 11 was the first time that a coup d’état imposed by the United States was defeated in 48 hours.

After reversing the 2002 coup, and with the phenomenal alliance between Chávez, Néstor Kirchner and Lula da Silva, came the “No to FTAA,” the regional alliance was consolidated, MERCOSUR was reformulated, OPEC was consolidated, UNASUR was created, ALBA-TCP was created, CELAC was created. TeleSUR was created, which is a fundamental tool for the media war throughout the region. The Venezuelan government executed an enormous number of policies that have greatly favored the people. It was an extraordinary period. Thus, 20 years after that historic event, it was a milestone for Chávez, for the Venezuelan people and for all Latin America.