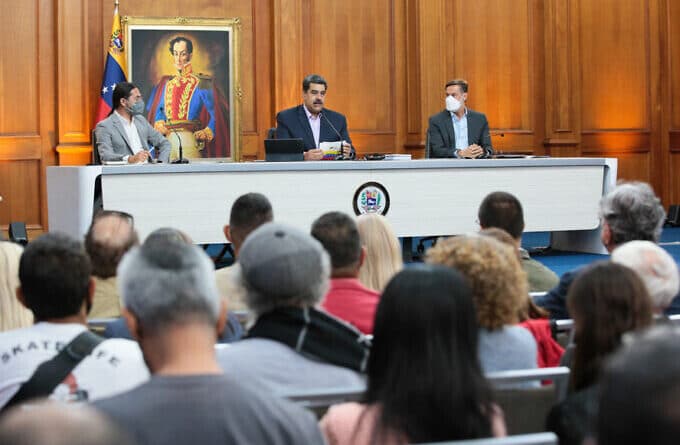 This Tuesday, April 12, Venezuelan President Nicolás Maduro, received intellectuals, national and international guests in the Ayacucho Hall of the Presidential Palace of Miraflores for the International Summit against Fascism. The head of state pointed out that with the April 2002 revolution, the possibility of building the social welfare state and the Bolivarian Revolution through the Missions and Great Missions of Chávez was born: “We have a strong and clear socialism that was born from the awakening of the peoples,” he said.

The president affirmed that from the depths of the Venezuelan social process the concept of a new participatory and protagonist democracy was born when “faced with the exhaustion of the model of the oligarchic and elitist Punto Fijo democracy.” Maduro emphasized: “Our original and historical project is, always has been and always will be participatory and protagonist democracy, as well as direct democracy with the expression of socialism as the ideology.”

The dignitary recalled the events that occurred in Venezuela on April 11-13, 2002, where he highlighted the role played by the owners of the large privately-owned television networks, the business sector and representatives of the church in the country, who openly supported the coup d’état against Commander Hugo Chávez.

Maduro said: “In 2002, an informative silence was imposed, the media outlets were closed, a media dictatorship was imposed by the owners of the country’s large media outlets […] The whole world thought that the massacre of April 11 was true and also that it was true that Chávez had resigned […] On April 12 our Commander Hugo Chávez was kidnapped by the military coup leaders and the high ranks of the Venezuelan church.” 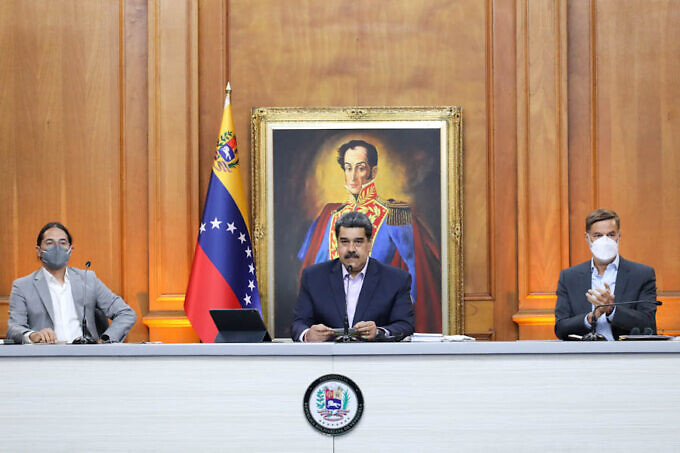 Maduro stressed that on April 11 and 12, 2002 there was a coup d’état orchestrated by the US, with the participation of the then president of Spain José María Aznar. “Fedecámaras was the organization chosen by the George W. Bush administration to head the de facto government after the coup,” he stated.

RELATED CONTENT: President Maduro: After 11A Venezuelan People have Gone Through 20 Years of Courageous Victories

Maduro said: “This decree of the dissolution of powers, the self-swearing in as well as assuming all the powers of the state, generated a national awakening, not only in Chavismo […] but also in a large part of the opposition citizenry. Many of them who had taken to the streets felt used and defrauded. Many were opposition people, including political leaders, who woke up when they saw this barbaric abuse of power, and thus very large fissures were created.” 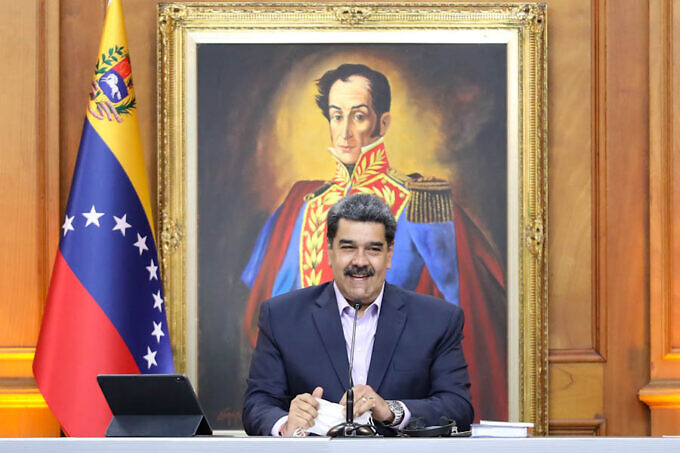 Accordingly, the president highlighted that the organization of the people during the events of April 11-13, 2002 created “a grassroots force that carried out what Commander Chávez called the April Revolution; the most perfect civil-military union.”

Lies of the West
The President urged communication professionals to break the narrative and the hegemony of the West, especially in the midst of the censorship that has been enforced against Russia and progressive countries. “We must break the hegemony of the narrative and the lies of the West in the face of the emergence of a multipolar and multicentric world, which is one of the great objectives of the popular forces of communication,” he said.

Maduro compared the events that occurred between April 11 and 12 with what is being imposed on Russia at the moment, after it began military operations in Ukraine. Among these measures is the blocking of Russia Today and Sputnik on social media platforms. 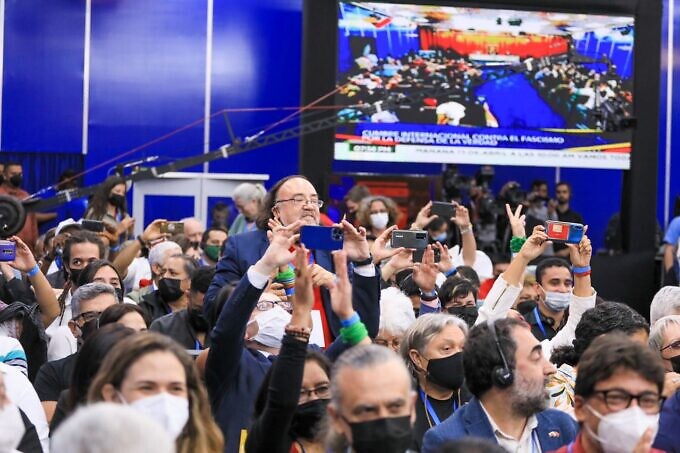 He pointed out that the strategy of the West is “to reduce the freedom gap,” and thus build a war story that justifies an armed conflict.

However, he considered that in today’s world, this media war is being effectively combatted by networks that resist the communicational dictatorship that is being imposed.

Attention to victims of repression in Chile
During the event, President Maduro reiterated his proposal that Venezuela is willing to offer ophthalmological medical care, through the Miracle Mission, for young people with eye injuries or trauma incurred from the strong repression of the Carabineros (military police) against protesters opposing former president Sebastián Piñera.

For this, Maduro instructed the Minister for Foreign Affairs, Félix Plasencia, to evaluate and carry out the necessary steps before the Chilean government to bring a halo of hope to the young people affected by the excessive use of force exercised by the security apparatus in Chile.

Coup and Counter-Coup of April
On the occasion the Day of Popular Communication, President Nicolás Maduro baptized the book Coup and Counter-Coup of April, prepared by the presidential press team, which describes the political, economic and social events that led to the coup of the state, as well as the forceful grassroots response for the rescue of the constitutional thread in 2002.

From the hand of the Spanish journalist Ignacio Ramonet, red rose petals fell on Abril de Golpe y Contragolpe (Coup and Counter-Coup of April), a literary work described by the head of state as the reconstruction of the historical memory of an event that belongs to those who fight for humanist processes. 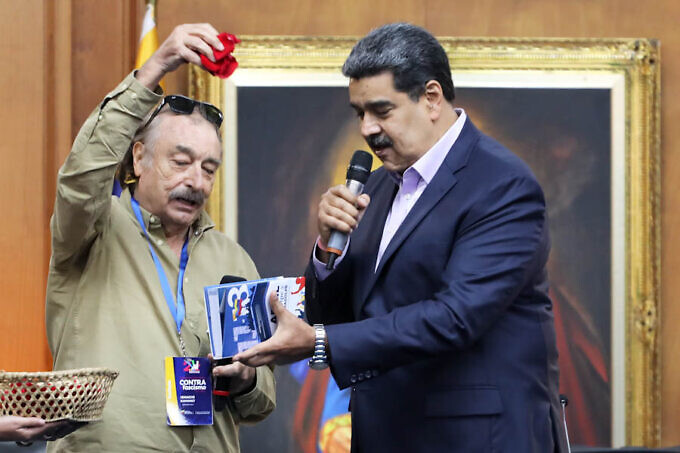 “It is a very beautiful book, a compilation of the press of that time, of the news that circulated day by day, moment by moment, so that we can build a solid, powerful memory of a historical event that does not belong only to Venezuelans, but to all the people who fight for the human Revolution,” he said.

The book Abril de Golpe y Contragolpe contains testimonies, interviews, historiographical compilations and vast photographic samples that take us back to the events that occurred on April 11-14, 2002. Based on a detailed journalistic investigation, Abril de Golpe y Contragolpe compiles in pedagogical ways the work of social and professional communicators who—with awareness of the historical moment—detail what was then the attack on democracy and the rule of law, and the violation of the Magna Carta.

The empire of surveillance
With regards to his speech at the International Summit against Fascism, which took place until yesterday, Wednesday, April 13, President Maduro also baptized the book The Empire of Surveillance by Spanish journalist and writer Ignacio Ramonet.

Ramonet points out: “Surveillance has a relatively recent history: Machiavelli, for example, in The Prince does not even mention spies in charge of surveillance. On the other hand, Sun Tzu in The Art of War says that you have to put spies everywhere […] From the 18th century, the concept of modern surveillance begins, here we mean that during the 20th century in particularly, this thought that they could watch us, in particular in George Orwell’s 1984, he describes a society totally subjected to surveillance, where he thinks of the state as the dictatorship.” 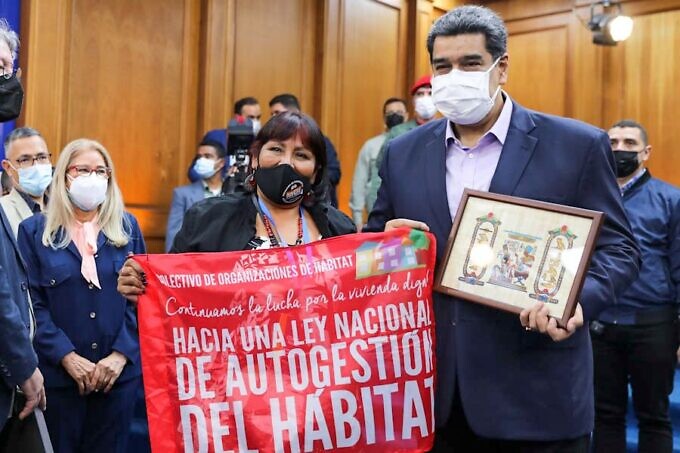 The International Summit Against Fascism took place as part of the activities for the commemoration of the 20th anniversary of the people’s counter-coup of April 2002 that seeks to promote the digital revolution and new technologies, through the principles of the 3R.NETS (resistance , renaissance, and revolution which mark the new stage of the transition into socialism).

More than 200 international guests from five continents participated, where they debated the new communication strategies that mark the accelerated technological change and popular resistance of today. 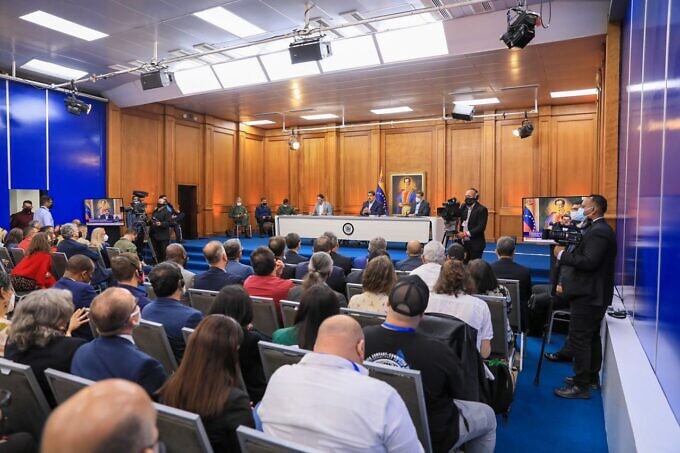 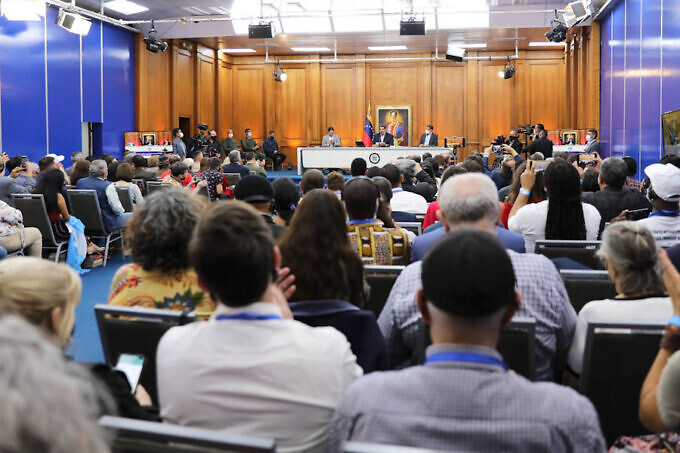