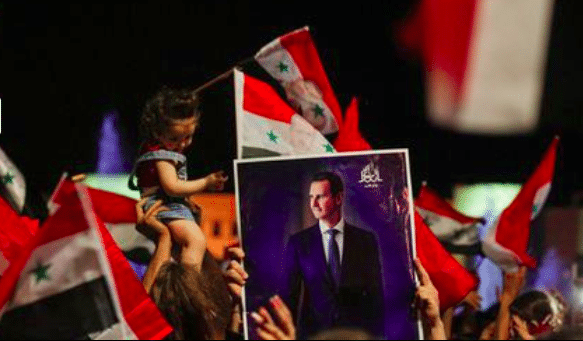 The President of the Bolivarian Republic of Venezuela, Nicolás Maduro, on behalf of the Venezuelan people, sent a message of congratulations to the Syrian people and to his Syrian counterpart Bashar al-Assad for his overwhelming victory in the presidential election held on May 26 as a result of ”an exemplary democratic process” in Syria.

In this regard, Foreign Affairs Minister Jorge Arreaza posted this Thursday, May 27, on his Twitter account @jaarreaza: “President Nicolás Maduro, on behalf of the Venezuelan people and the government, congratulates the Syrian people for the exemplary democratic procedure of May 26. The undeniable triumph of brother President Bashar al-Assad is a victory for peace and national sovereignty.” With these words he attached the text of the formal communiqué issued by the Venezuelan Ministry of Foreign Affairs.

On Thursday, May 27, the Speaker of the People’s Assembly of Syria, Hammouda Sabbagh, announced that the candidate for the Baath Arab Socialist Party, Bashar al-Assad, won the presidential elections held in the country with 95.1% of the votes cast.

Telesur’s correspondent in Syria, Hisham Wannous, reported that “the presidential candidate and current President of Syria, Bashar al-Assad, won the presidential elections with 95.1% of the total votes,” adding the information given by Sabbagh, who had specified that 13,540,860 votes were received by the incumbent president.

RELATED CONTENT: CIA Commemorates 60-year Anniversary of one of its Most Infamous Failures in History – Bay of Pigs Invasion – with ‘Victory’ Coin

Here is the full official translation of the communiqué published with the Venezuelan Ministry of Foreign Affairs:

It is the victory of peace and national sovereignty over the cruel war imposed against the brotherly Syrian people who, under the leadership of President al-Assad, has resisted with admirable dignity and patriotism the attacks and ambition of the imperialist forces and terrorist groups that tried to defeat them, without success.

Neither the war, nor the economic aggression through inhumane and illegal sanctions, nor the health crisis generated by the COVID-19 pandemic, could prevent this impressive popular triumph. The massive electoral participation constitutes a strong message of popular rejection of the agendas of the imperial powers.

The Bolivarian Republic of Venezuela reiterates its firm support for the sister Arab nation and its willingness to deepen and expand bilateral cooperation to contribute to the mutual welfare of both peoples and the consolidation of sovereignty and self-determination in both nations.