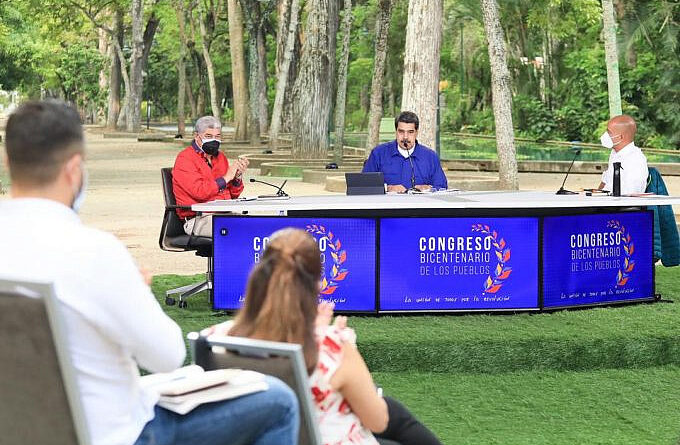 On Thursday, May 27, Venezuelan President Nicolás Maduro presented a report on the Bicentennial Congress of the Peoples, and asserted that this is a process that articulates all the social forces of the country. He emphasized that the Congress is taking place in a time of union and social awakening, in a time of sacrifice and social struggle. He stressed that over the course of the nation’s revolutionary process, never had so many social movements united together as what is happening now through this Congress of the Peoples.

”We invite you all to participate in the Bicentennial Congress of the Peoples,” reiterated the president. ”We already have more than 8 million members grouped in 41 active social movements; the only requirement is to be Venezuelan and to love Venezuela.”

Eight million registered
During the event, the governor of Miranda state, Héctor Rodríguez, informed that more than 8 million people have registered to participate in the Bicentennial Congress of the Peoples.

“We already have 41 powerful social movements that constitute the Congress,“ he informed. ”Over 8 million 339 thousand 844 have registered; half of them are senior citizens. We are installing the presidential councils; there are already more than 30, more than 2,400,000 communes, and 306 working groups, that is, 75% of the organizations,” he explained.

He added that an important point is the battle of ideas, and also the media war with the creation of more than 700 murals, in addition to 86 meetings and videoconferences.

For his part, the spokesperson for the National Commission of the Congress, Pedro Infante, reported that among the preparations for the celebration of 200 years of the Battle of Carabobo, a special highlight is the Flame of the Fire of the Homeland, which is currently traveling through Amacuro Delta.

”For the mobilization that has been requested from the Congress, social work is being carried out throughout the country,” informed Infante. ”The days of 200 thousand flags made by the communes are being organized; 200 thousand trees will be planted. We are organizing the bicentennial dominoes, the tricolor parrot and community gatherings in the more than 48,000 communities in the country,” he detailed.

The dignitary emphasized that the protagonist participation of the People’s Power is vital in the political, social and economic processes in the face of the criminal blockade imposed on the country by the US and European powers.

The popular and revolutionary forces of the country have remained active, raising questions and issues, a task in which the youth, cultural, labor and social movements have played an important role, in addition to the consolidation and recovery of the country in the face of the attacks resulting from the political and financial blockade imposed by US imperialism.

The seven tasks of the Bicentennial Congress of the Peoples are:

• Strengthen and expand the political stability of the country,

• Defense of the Homeland and citizen security,

• Expansion of Missions and Great Missions,

• Improvement of public services, and

• Development of the new Bolivarian and geopolitical diplomacy.