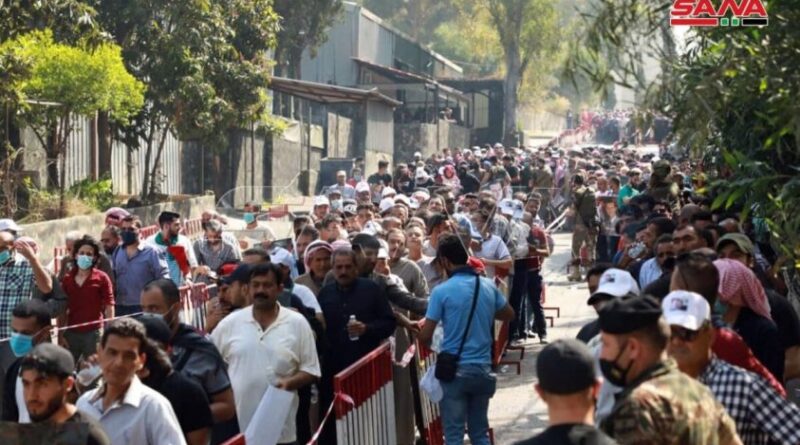 May 23 (Special for OrinocoTribune.com)—On Thursday, May 20, Syrian refugees and residents in different countries around the world voted in massive numbers at Syrian diplomatic missions that were turned into polling centers for the presidential elections. This was the first day of voting in a two-day process—within Syria, citizens will go to polls on May 26.

The generally peaceful electoral process was only marred by xenophobic attacks against Syrian voters in Beirut, Lebanon, that killed one voter, reported Syria News.

The first country to open the polling centers was Australia, where Syrians registered for this year’s election voted at the consulate in Sydney. In countries of South-East Asia and the Indian subcontinent, where sizable Syrian communities reside, voting was conducted at Syrian embassies and consulates.

The highest voter turnout was in Syria’s neighbor Lebanon, just like in the 2014 presidential elections. Lebanon is the country where the largest number of Syrian refugees live, and this was the only country where the voters experienced violence. According to Beirut-based Al-Jadeed TV, mobs associated with extreme right-wing parties shouted anti-Syrian and anti-refugee slogans in Saadnail neighborhood of east Beirut and the northern neighborhood of Tripoli, and attacked cars and buses in which the voters were traveling. A voter, who was going to the polling station with his young child, was killed in the violence.

The Syrian Ambassador to Lebanon, Ali Abdul Karim, demanded that the Lebanese authorities “must find and punish everyone who attacked Syrians heading to the embassy to cast their votes in the presidential election.” On account of the violence, voting was extended to midnight, and there were long queues even in the evening.

On the other hand, the process was peaceful in all other countries of the Middle-East, with huge voter participation in Iran, Jordan, Egypt, Sudan, and Algeria.

In Europe, all countries where Syrians reside opened up the Syrian diplomatic missions to let the people vote, except Turkey, UK, and Germany. In protest against their disenfranchisement, Syrian voters marched through the streets of a number of German cities, and in Berlin a symbolic vote was held in front of the Syrian Embassy.

Protests were also held in Turkey, whose government had already declared earlier that it did not consider the Syrian presidential election “democratic.” “We didn’t expect Erdogan to respect international law,” said a Syrian refugee in Istanbul. “Turkey already illegally occupies a part of our country, and has cut off water of the Euphrates to deprive us and Iraqis—it is a rogue nation!”

In the American continent, Syrian expatriates could not vote in Canada and the United States, as these two countries had closed the Syrian missions and severed all ties with the Syrian government. The administrations of these countries are also primarily responsible for the continuing ten-year long war on Syria. The Biden administration declared even before the electoral process began that the US will not recognize the results of the presidential elections in Syria. Ayman Soussan, advisor to the Syrian Minister for Foreign Affairs, denounced the deprivation of voting rights of Syrians residing in these countries, adding that “no country in the world has the right to delegitimize elections in any other country,” reported Syrian Arab News Agency (SANA).

In contrast, in Latin America, where Syrians have lived for decades even before the US-led assault started against the Middle-Eastern nation, resulting in one of the most serious refugee crises at present, Syrian diplomatic missions were provided various means of support to hold the election. Strict COVID-19 healthcare protocols were maintained at all polling stations. Syrians registered to vote in Venezuela cast their ballots at the Embassy of Syria in Caracas. Similarly, the electoral process was conducted in peaceful and organized manner in Cuba, Argentina, Brazil, and other countries of the region.

Three candidates are running for the presidency of Syria—the current president Bashar al-Assad who is seeking re-election; Abdullah Salloum Abdullah, former Syrian minister for parliamentary affairs; and Mahmoud Ahmad Marhi, leader of the opposition party National Democratic Front. In April, 51 candidates had submitted their applications to the Supreme Constitutional Court of Syria, of which these three candidates met all the conditions for the presidential contest as detailed in the amended Constitution of 2012, and also got the required number of endorsements from parliamentarians.

The government of Syria, in an official statement, thanked the voters abroad for participating in the democratic process and the countries for allowing and supporting the process to be carried out in a transparent and organized manner.

Opposition candidate Marhi expressed his faith in the voting process carried out outside the country as well as the procedure to be conducted inside the country next Wednesday. “I am certain that the people of my country will elect the president they consider suited best to lead the post-war reconstruction,” he stated. Explaining the distinction between the “national opposition” which is based in Syria and the “foreign-backed opposition” whose leaders mostly live abroad, Marhi emphasized that his priorities are ending the occupation of parts of Syria by illegal forces and foreign armies, and to carry out a national dialog between the government and the opposition to move the country out of war and destruction. “I will accept the results of the election, whatever they may be,” he added.

In the words of Syrian-American journalist Steve Sahiounie, “After 10 years of fighting terrorism which split the country, Syria is succeeding in electing its president… Syria now looks forward to rebuilding what the West destroyed.” He commented that the main challenges for the new president in this regard will be to recover the economy amid crippling sanctions imposed by the US and its allies, and to retrieve the oil fields in occupied north-eastern Syria that remain under control of US-backed forces, as oil provided a quarter of the national revenue before the war started.