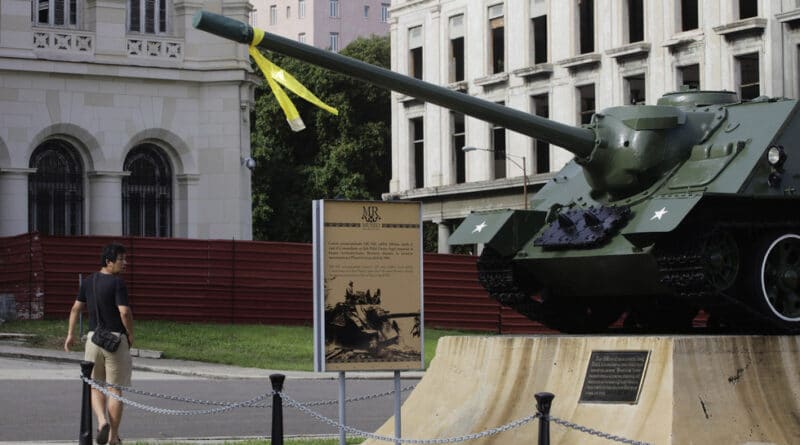 Whatever possessed the CIA to issue a coin commemorating one of its worst disasters, the failed 1961 “Crusade to Free Cuba,” it gave Twitter users a chance to mercilessly mock the US spy agency with Fidel Castro memes and such.

“This silver coin commemorating an anticipated (but never realized) Bay of Pigs victory features an outline of Cuba with a rebel invader advancing past a fallen member of Castro’s military in the foreground,” the agency tweeted on Tuesday, with a photo of the artifact.

This silver coin commemorating an anticipated (but never realized) Bay of Pigs victory features an outline of Cuba with a rebel invader advancing past a fallen member of Castro's military in the foreground.#HISTINT #Museum

The jokes practically wrote themselves, with one user commenting that “anticipated but never realized” victory is an interesting [way] of saying “we lost.”

RELATED CONTENT: How Much Did the Trump Administration Know About the Failed Venezuela Coup Attempt? (Bay of Pigs 2.0)

More than one comment called the coin the CIA version of a “participation trophy,” referring to the consolation prize doled out at school sporting contests in the US.

Some responses featured a smiling Fidel Castro smoking a cigar. Castro was the leader of the Cuban revolution, whom the CIA sought to depose through the Bay of Pigs invasion.

The CIA also failed in an untold number of attempts to assassinate Castro, prompting one commenter to ask if they were releasing coins commemorating those failures, and another to quip: “They could never beat the final boss.” Castro officially retired in 2006 and died in 2016 of natural causes.

Among the replies was a funny reference to a SU-100, a Soviet tank destroyer that Castro personally used to hit one of the invading ships – according to a plaque at the Museum of the Cuban Revolution in Havana, next to which the vehicle is mounted on a plinth.

The museum page to which the CIA’s tweet links actually admits that the Bay of Pigs invasion was “an unqualified disaster” and that Cuban forces captured or killed most of the 1,400 invaders within three days. It also reveals that the reverse side of the coin “prominently displays a cross, shield, and the flag of Cuba with the phrases ‘Crusade to Free Cuba’ and ‘There will be no end but victory.’”

“Reissue it in a set with a keychain for that goofy assault on Venezuela that was thwarted by fishermen and a very limited edition ‘We created ISIS and the Syrian civil war and all America got was the bill’ T-shirt,” another user suggested.

It’s unclear why the agency picked this particular day to bring up the Bay of Pigs, considering that the 60th anniversary of the failed invasion was in mid-April. In any case, the level of mockery rivaled that meted out to the “woke” recruiting videos posted on YouTube earlier this month.

Featured image:  A SU-100 tank destroyer used by Cuban leader Fidel Castro during the US-backed Bay of Pigs invasion in 1961, at the museum in Havana, September 12, 2013. © REUTERS/Desmond Boylan