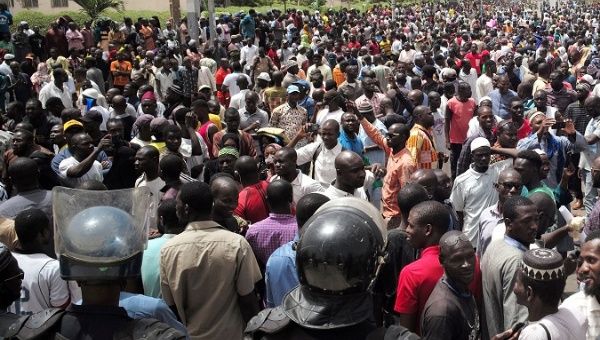 “The Malian people came out today as one man, to say no to violence and no to ethnic cleansing,” a statement from Kisal, a Fulani advocacy association, read.

Over 10,000 people took part Friday in protests in Bamako, the capital of Mali, in which demonstrators condemned the increasing violence in the central region of the country. They also called out President Ibrahim Boubacar for his inadequate response that has so far failed to put an end to violent unrest.

Muslim leaders called for the protests, as well as representatives of the Fulani herding community, opposition groups, and civil society organizations. “The Malian people came out today as one man, to say no to violence and no to ethnic cleansing,” a statement from Kisal, a Fulani advocacy association, read. Previous attempts to organize protests, specifically aimed to denounce the Ogossagou massacre of 160 people last month, were postponed.

The United Nations reported 153 deaths and 75 injuries as a result of the attack in Mali’s restive Mopti region. Local officials said later that the number had risen to 160.

The U.N. says the tensions are worsened by food shortages and lack of public services that have resulted from al-Qaida seizing control of the northern region of the country in 2012. The organization stated that, as a result, the country desperately needs humanitarian aid.

The violence in the country is attributed to tensions between the Fulani and the Dogon, a hunting and farming community that allegedly carried out the Ogossagou attack.

At the protests, chants could be heard telling the president: “IBK get out.” Mariam Fomba, the widow of a soldier, blames the president and his cabinet for the deaths of “our children, our husbands, and our parents.”