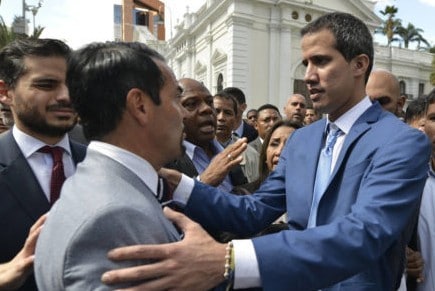 “The French ambassador to Venezuela has once again seriously interfered in the internal affairs of Venezuela,” said President Maduro.

On Friday, February 14, President Nicolás Maduro accused the French ambassador in Caracas, Romain Nadal, of meddling in the internal affairs of Venezuela, after the diplomat received the opposition leader Juan Guaidó on his return from an international tour.

“The French ambassador to Venezuela has once again seriously interfered in the internal affairs of Venezuela,” said the Socialist president in a press conference with foreign correspondents.

Maduro reported that the Venezuelan Foreign Ministry “is evaluating the response”, without ruling out an expulsion for Nadal, as the one on March 2019 on the German ambassador to Venezuela, Daniel Kriener, whom he declared “persona non grata” for also receiving Guaidó at the Maiquetía airport, which serves Caracas.

“The answers cannot be automatic or repetitive, what we did a year ago does not have to be what we do today, although it may happen,” warned the socialist head of state referring to the case of Kriener, who resumed his position in July 2019 after formal German apologies.

“Can you imagine our Ambassador in Paris participating in the Yellow Vests protest?” said President Maduro referring to the protests in France agains Macron austerity policies and against neoliberalism that have been ongoing for more that 60 weeks and heavily repressed by Macron’s repressive forces.

Guaidó returned to the country last Tuesday after a 23-day tour called by some as the “Brand New US Sanctions Tour 2020”. The Trump regime implemented new sanctions against Venezuelan public airline Conviasa after meeting with Guiado.

Maduro wondered what would happen if his ambassador in France participated in the demonstrations of the “yellow vests”, the social and fiscal protest movement that emerged in France in 2018.

Maduro asked his chancellor, Jorge Arreaza, present at the conference, to “evaluate very well the response to those embassy officials who were meddling in the internal affairs of Venezuela” the day Guaidó returned. “We are going to evaluate one by one,” he said.

The deputy undertook his tour after circumventing a ban on leaving Venezuela, where he faces several criminal proceedings so far without an arrest warrant has been issued against him.

Featured image: Archive image. Guaido and French Ambassador during the election on AN new executive board last January.