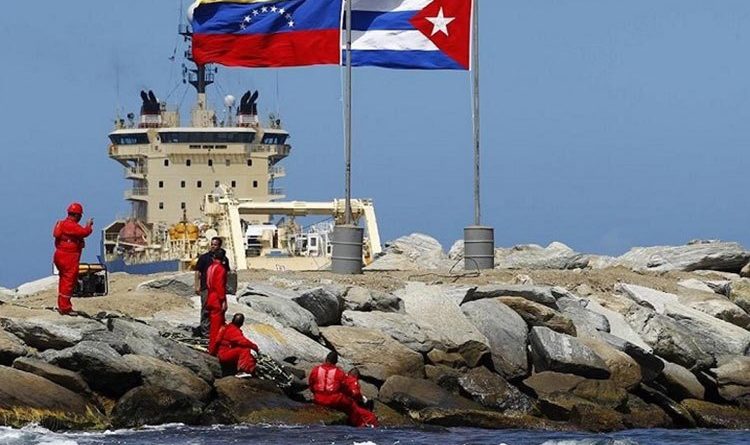 This month Venezuelan state oil company PDVSA increased fuel shipments to Cuba, which is suffering from a shortage of crude oil due to illegal US sanctions, according to company sources and documents seen by Reuters.

Six ships, the majority owned by the PDVSA maritime unit, have exported an average of 173,000 barrels per day (bpd) of Venezuelan crude and fuel to Cuba so far this month, according to Refinitiv Eikon data and PDVSA documents.

“More ships are heading to Cuba in two weeks,” said a shipping supervisor from a port on the west coast of Venezuela. “They come and go very fast,” he added.

The sanctions imposed on PDVSA in 2019 with the objective of overthrowing Venezuelan President Nicolás Maduro have slowed oil shipments to the island and contributed to the intermittent shortage of fuels.

The energy crisis in Cuba hit its sugar industry this month, when two mills that interrupted operations during the high harvest season. It has also caused lines of more than an hour at service stations, while supply at the east end of the country is delayed.

“You don’t see cars in the streets. There is no transport. This is the first time this is seen so critical here in Santiago,” said private taxi driver Fidel Gonzalez, 37, by phone from Santiago de Cuba.

The service stations received some supplies on Wednesday for the first time in a week, he added, although gasoline lasted only a few hours.

A similar shortage in September led PDVSA to send a fleet with emergency fuel cargoes and other refined products to Cuba. However, the aid was short-lived as the sanctions cut the number of ships available to transport oil from PDVSA to Cuba.

Havana has tried to diversify its imports in recent weeks with ships arriving from Argentina, Algeria and Curaçao, according to Eikon data.

But since the arrivals have been insufficient, the island seems to prioritize power generation over the supply of engine fuel and fuel for industrial customers, said analyst Jorge Piñón, of the University of Texas, Austin. It was not immediately possible to obtain data on the national fuel production of Cuba.

“There are still many things we don’t know about how they handle their supply levels and inventory of crude and products,” Piñón said. “What is very clear is its continued dependence on Venezuela,” he added.

The fuel crisis in Cuba last week affected the tourism sector, one of the main sources of foreign exchange. The agencies could only rent cars with a limited fuel quota that was barely enough to move around Havana, although the situation had returned to normal by Thursday.

“Life is getting more complicated here every day,” said Virginia Montes de Oca, after waiting two hours to fill her gas tank. There were still a dozen cars in front of her.

During the last year, Cuba has faced a shortage of everything, not just fuel, after the US sanctions aggravated a liquidity crisis that began with the decrease in Venezuelan aid four years ago.

The director general for the United States of the Ministry of Foreign Affairs of Cuba, Carlos Fernández de Cossío, said on Twitter that Washington’s sanctions were “brutal and immoral.”

“They do not hide the desired objective of punishing the entire population to extract political concessions,” he said. “It is a miracle that the situation is not worse and that the country still enjoys peace and stability,” he said.

Washington accuses the Cuban government of providing security assistance to shore up Maduro.

“Although there is actually a crisis, both in Cuba and Venezuela as a result of harsh US sanctions and most MSM (including Reuters) usually post pieces hoping to feed animosity among both peoples, the fact is that Cuba and Venezuela friendship is stronger that ever,” an analyst said to OT.

“Even taking into consideration all the local campaign of demonizing Cuba, China and Russia, labeling them as imperialist powers when the reality is they are strategic allies that have not bent to the US regime change operation and help the Venezuelan people to counter US aggression and even possibly, military aggression from the US regime,” he added.

“In recent months Venezuela has also been affected by fuel scarcity in some regions of the country and these media pieces are usually posted to create animosity among Venezuelan people against Cuba, but in reality the facts contained in them are only more evidence of the brotherhood between both countries,” said OT Editor, Jesus Rodriguez-Espinoza, consulted on this matter.