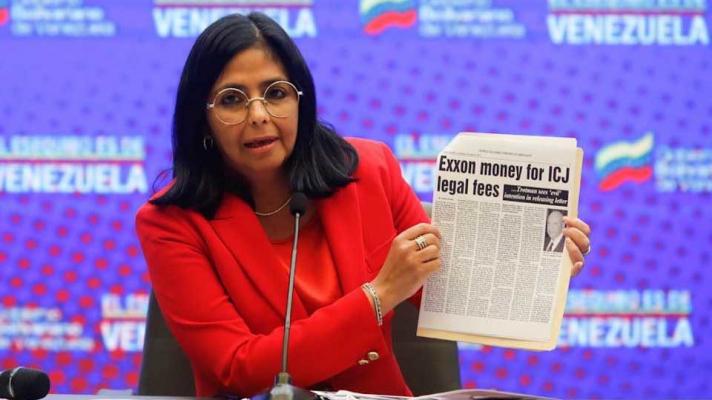 This Monday, the Executive Vice President, Delcy Rodríguez, alerted the country and the region about joint military exercises being carried out by the governments of the United States and Guyana, planned when US Secretary of State Mike Pompeo traveled to the South American country during his diplomatic tour on September 2020.

During a press conference, Rodríguez called the exercises “an antagonizing action by the government of Donald Trump that intends to create provocations, threats and aggressions against the Venezuelan people, against sovereignty and against territorial integrity.”

She said the presence of a US coast guard vessel was detected. “We are very attentive to the development of these military exercises, which are not carried out in the territorial waters of Venezuela.” She asked the government of Guyana and Craig Faller, chief of the Southern Command in charge of the military exercises, “to respect the decree of the Zone of Peace endorsed by the Community of Latin American and Caribbean States (CELAC).”

For his part, General Vladimir Padrino López, Venezuela’s defense minister, recalled that there are “precedents where Exxon Mobil ships have entered the country with the support of the Guyanese government.”

RELATED CONTENT: US, Guyana Carry out Military Drills near Disputed Waters of Venezuela

In 2018, La Tabla reported that the Venezuelan Navy had boarded the seismic vessel Ramford Tethys, hired by the US transnational, and caused it to withdraw when it was in Venezuelan territorial waters.

There is another precedent in October 2013, also reported by La Tabla: “the patrol vessel AB PO-13 YEKUANA intercepted the seismic vessel Teknik Perdana, contracted by the US oil company Anadarko, which has a Guyana concession in the Roraima Block, and led it under arrest to Margarita Island.”

Faced with the threats of new incursions, this time Defense Minister Padrino López assured that the Bolivarian National Armed Forces (FANB) will ensure the sovereignty and integrity of the Venezuelan territory.

Featured image: Vice President of Venezuela, Delcy Rodríguez, denounced the government of Guyana for authorizing US military actions in the maritime zone (Photo: Vice-presidency of Venezuela.)