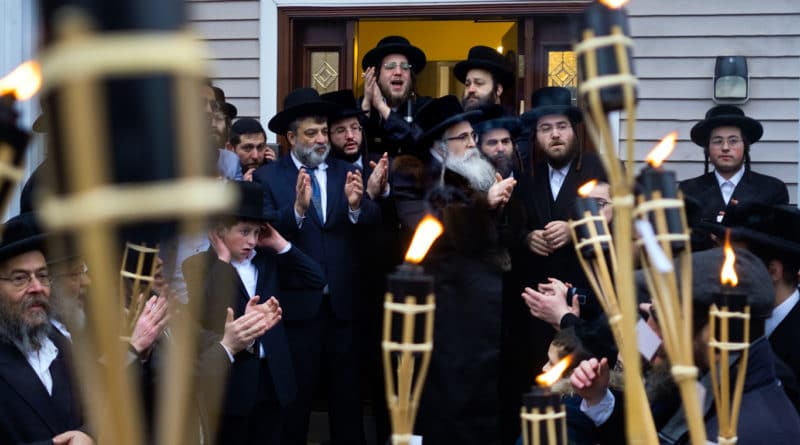 While poverty, inequality and social and economic dislocation that breed fear and resentment of the other continue to grow, the problem of racist attacks is bound to increase.

The latest in a spate of Trump-administration era anti-Semitic attacks saw five people stabbed at a Hanukkah celebration in Monsey, New York Saturday. Over 100 people were gathered in a rabbi’s house to mark the Jewish festival of lights when an armed and masked assailant burst in to attack at around 10 p.m. He was fought off by those inside and fled the scene. Two victims remain critically injured.

Less than two hours later, police arrested a suspect, 37 year-old Grafton Thomas, in Manhattan. Thomas pleaded not guilty to five counts of attempted murder and one count of first-degree burglary. His family released a statement saying that he has a long history of mental illness and hospitalizations. Despite this, others claimed he could not possibly be the perpetrator. “Grafton is not a terrorist…He’s not a violent person” said his pastor, while a family friend claimed he was always a “loving man with a lot of creativity” and a “wonderful spirit”.

“We were scared, but we were not surprised,” said Aron Wieder, a Jewish resident of Rockland County, NY. “This is not the first incident in New York,” he added. Indeed, the latest attack is the latest in an increasing number of anti-Jewish attacks across America.

The Anti Defamation League (ADL) notes that incidents against Jews are nearing an all-time high. In October last year, a far-right anti-immigrant gunman carried out a mass shooting at the Tree of Life Synagogue in Pittsburgh, PA, killing 11. Another shocking event occurred in April during Passover, when a Hitler-idolizing fascist opened fire at the Poway Synagogue, near San Diego, CA. Meanwhile, in a show of strength in Charlottesville, VA, large numbers of white nationalists held a torchlight rally chanting slogans like “blood and soil” and “Jews will not replace us.”

Monsey is home to one of the highest proportions of Jewish residents in the United States. New York Police Department Commissioner Dermot Shea said that hate crimes, in general, have risen 22 percent in 2019.

The CEO of the ADL Jonathan Greenblatt announced that:

Whether worshiping in synagogue, shopping in the supermarket or celebrating at home, Jews should be safe from violence. We need authorities to provide increased protection NOW and ensure that the full force of the law is brought down on those who perpetrate such horrific crimes.”

New York Mayor Bill De Blasio has promised to increase police patrols in Jewish neighborhoods after a wave of local incidents in the city this month.

The attack last night in Monsey was an act of pure evil.

The cascade in anti-Semitic attacks is outrageous throughout metropolitan New York and America, and must not be tolerated.

We need a thorough federal investigation of this specific attack and all of the recent attacks. https://t.co/6SVoEtSflz

Trump’s anti-Semitic tropes
President Trump tweeted his horror at hearing of the latest and most serious attack at Monsey, promising to “eradicate the evil scourge of anti-Semitism.”

The anti-Semitic attack in Monsey, New York, on the 7th night of Hanukkah last night is horrific. We must all come together to fight, confront, and eradicate the evil scourge of anti-Semitism. Melania and I wish the victims a quick and full recovery.

Yet Trump himself consistently uses anti-Semitic language. Earlier this month he gave a speech at the Israeli American Council National Summit. The president told the crowd “A lot of you are in the real estate business because I know you very well. You’re brutal killers, not nice people at all. But you have to vote for me, you have no choice,” implying his Jewish audience cared about little but their own wealth. CNN noted his comments still drew applause and even cheers from the audience. During his 2016 political campaigning, he told a group of Jewish Republicans “You’re not going to support me because I don’t want your money” and earlier had claimed he only wanted “short guys wearing yarmulkes” counting his money. He also claimed that Jewish Democrats are “disloyal” to Israel, regurgitating the classic racist stereotype of dual loyalty.

It’s unclear who @POTUS is claiming Jews would be “disloyal” to, but charges of disloyalty have long been used to attack Jews. As we’ve said before, it's possible to engage in the democratic process w/o these claims. It's long overdue to stop using Jews as a political football.

Amid the increase in anti-Semitic incidents, Bernie Sanders is campaigning to become the country’s first Jewish president. Sanders declared his outrage at the attack and released a statement reading:

On this final evening of Hanukkah, a celebration of light overcoming darkness, Jane and I send our love and support to our Jewish brothers and sisters during this difficult time.

Let us all recommit to standing together to defeat bigotry, violence, and anti-Semitism.

Yet others around him are increasingly the targets of counter-accusations that they themselves are anti-Semitic, most often over their criticism of Israeli government policy.

While poverty, inequality and social and economic dislocation that breed fear and resentment of the other continue to grow, the problem of racist attacks is bound to increase. A solution like Sanders suggests, of reintegrating dispossessed people into society, could go some way in combatting the age old problem of anti-Semitism. But unless something drastic is done, the Monsey attack is unlikely to be the last.

Feature image: Community members celebrate the arrival of a new Torah at Chaim Rottenberg residence, Dec. 29, 2019, in Monsey, N.Y. where a day earlier, a knife-wielding man stormed into the home and stabbed multiple people as they celebrated Hanukkah in the Orthodox Jewish community. Craig Ruttle | AP