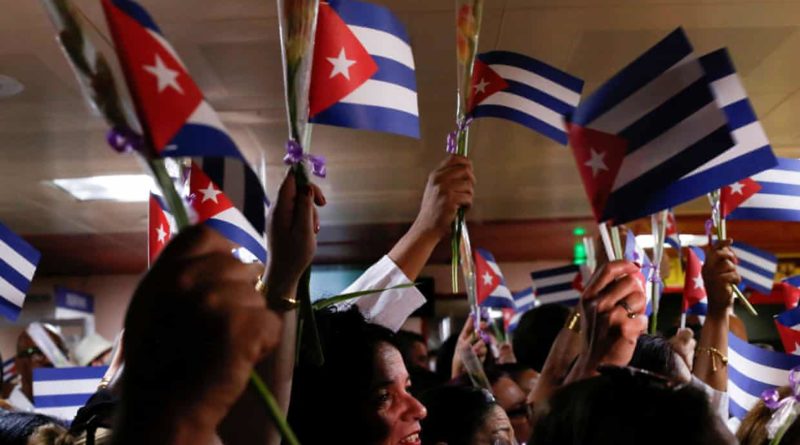 After US allies expel foreign health missions, Havana warns that patients will pay the highest price for campaign against its scheme

A Cuban medical programme that has helped some of the world’s poorest communities has become the latest target of the Trump administration’s escalating attempts to pressure Havana’s faltering economy.

Dubbed “Cuban doctors”, the celebrated – if controversial – humanitarian medical mission was founded more than half a century ago in the aftermath of Fidel Castro’s revolution, in part to enhance the country’s international influence.

Currently active in over 60 countries, the scheme has provided healthcare across the globe, from indigenous Amazon peoples to slum residents in Africa to the victims of Haiti’s 2010 earthquake.

Now its work has come under renewed fire via a combination of allegations, led by Washington, which has accused Havana of using the doctors to undermine democracy, not least in Venezuela – which hosts one of the biggest missions.

Havana has also been accused – in claims taken up by Washington – of “exploiting” the medical staff sent on the missions. One report suggested work conditions, low salaries and coercion amounted to “modern slavery”.

In response, Cuban officials, and analysts who have closely studied the work of the medical missions, accuse the US of using the claims as cover for its policy of strangling the Cuban economy in the hope of damaging the left-wing regime, while warning that poor patients will be the biggest victims.

According to Cuba’s ministry of foreign affairs, more than 600,000 Cuban medical staff, including doctors, nurses and technicians, have been sent to more than 160 countries since the 1960s.

While some two dozen missions are provided free of cost by Havana, other countries where the doctors are deployed pay Cuba for the medical services, bringing in $6.3bn (£4.8bn) annually, Havana’s largest source of foreign currency.

RELATED CONTENT: Cuba in the Struggle Against Coronavirus Epidemic

The US campaign against the Cuban doctors has intensified amid recent political changes in Latin America, which have led to the expulsion of the missions from several countries, including Bolivia and Brazil, where left-wing governments have been replaced by right-wing regimes closely aligned with Trump and Washington.

At the forefront of the allegations is US secretary of state Mike Pompeo, who has both depicted the deployment of Cuban doctors in countries from Venezuela to Brazil and Ecuador as sinister interference in their affairs, and congratulated countries – like Bolivia – that have expelled them.

Pompeo has been backed by other senior US officials and agencies, including deputy secretary of state Michael Kozak, who has also latched on to recent claims about the doctors’ working conditions.

“The Castro regime sends up to 50,000 Cuban medical staff overseas to work in harsh conditions. Stories of abuses abound. The regime pockets 75% of the doctors’ salaries, and using (sic) them to keep allied regimes in power,” Kozak tweeted before Christmas.

The main US development agency, USAid, has also weighed in, offering to fund organisations helping to expose negative aspects of the scheme. They have accused Cuba of “exploit[ing] its medical professionals … using them to buy international financial and political support and keep its struggling economy afloat, while pocketing the majority of these workers’ salaries and subjecting them to poor living conditions, constant surveillance, and threatening those who wish to leave their mission”.

The claims surrounding the doctors’ work conditions were fuelled by a report last year by NGO Prisoners Defenders, which claimed to have interviewed more than 100 doctors, allegations taken up by two UN rapporteurs.

Critics say Washington’s campaign against the doctors, which includes attempts to persuade them to defect, is little more than an attempt to strangle the amount of foreign revenue that they bring in – much of which is ploughed back into Cuba’s health and social services.

“The government of President Trump has crossed the red line of decency by taking the foreign relations of the United States to levels of hypocrisy and double standards that none of his predecessors have done,″ Tablada said.

RELATED CONTENT: How Do Two Months in Bolivia Without Cuban Doctors Translate?

While the Cuban doctors have been criticised in the past, not least by those who say they undercut poor countries’ development of their own healthcare systems and medical training, the current US pressure on the programme coincides with the election of Donald Trump and his apparent determination to reverse the warming of relations between the US and Cuba that took place under the Obama administration.

“The [US policy] is targeting the two main sources of external income for Cuba, first tourism and now medical services,” explained Pavel Vidal Alejandro, a Cuban-born academic at the Xavierian University in Colombia.

“Medical services represent around 60% of Cuba’s total foreign income,” he told the Guardian. “It’s the old policy of applying a high pressure cooker strategy in the hope it will produce social protests. That didn’t happen in the past and is not happening now.”

John Kirk, an academic at Dalhousie University in Nova Scotia who has interviewed several hundred Cuban doctors is also sceptical about some of the claims – which he believes are “exaggerated” – and about the real reasons for the targeting of the Cuban doctors.

“Over the last 12 years I’ve interviewed 270 doctors, nurses and technicians and stayed with them on missions,” he said.

And, Kirk said, while it is clear that some doctors on the missions do defect or complain about working conditions, salaries and political pressure, his impression has been that many are motivated to join the missions and are happy at the opportunity to earn far more than they would practising medicine in Cuba.

“It’s in the DNA, the idea of a vocation,” he added. “One thing the doctors always said to me is how they can earn more than in Cuba. Another motivation mentioned was the experience they gained in some of these places, which they described as a living medical text book. They go to places others won’t go.”

“If you look at the situation in Brazil, Mais Médicos brought healthcare to to indigenous populations, to places like the Amazon that had never never seen doctors before.

“And what’s also missed [in the criticism] is that the programme brings in money to subsidise the Cuban healthcare.”

Guardian interviews with Cuban doctors who have served on medical missions, including those shut down in Bolivia and Brazil, portrayed a far more nuanced story than that depicted by the US and some of the critics.

While many would prefer to keep more of their salaries and enjoy better working conditions, they denied they felt like “slaves”.

Instead, for Dr Yoandra Muro, until recently the head of the expelled mission in Bolivia, the threats came instead from the new right-wing government that ousted left-wing president Evo Morales. She said they were accused of “being a white-coated army”.

“[Towards the end of the mission] the police entered our houses and took belongings of our colleagues. These were the same people we’d been giving healthcare to. It was very difficult to understand how overnight you turn from a doctor into a terrorist.

“We were in 35 hospitals where the majority of our professionals were specialists. This means there are 35 hospitals– where children are being born, where urgent surgery is required – that today don’t have those professionals.

“You can imagine the insecurity that they feel. There were lots of patients who cried when we left, that felt the pain of their doctor going, that said ‘what am I going to do now? Who will treat me now’?”

She added: “What a contradiction! Either we’re victims or we are threats.”

Yanet Rosales, 32, is a family doctor in Cuba who has completed two foreign medical missions including with Mais Médicos . Like many, she said the ability to earn far more than a doctor in Cuba was a strong motivating factor.

“From a personal point of view, I’d always wanted to go to Brazil and this was my opportunity. There’s also the economic factor. They pay us much more to be there, so this was a factor.

“The Brazilian government paid around €6,000 (£5,091) a month for our services [as doctors] of which we got to take home €1,500. The Cuban government took the rest to buy medical equipment and to improve health here.

“I never felt exploited.On the contrary … but we’re not totally in agreement with it. We were the ones working and far away from the family. Of course, we’ve got to help the country, we are there thanks to our government. We are aware that we are doctors thanks to the state, but we didn’t agree with the percentage we were getting. We think it should have been 50-50.

“But at the same time, if we weren’t fully in agreement with the contract, we wouldn’t have gone. They put those conditions to us before we went, so we can’t complain either.”

For Kirk, the outlook is worrying. “If Trump gets re-elected all bets are off. The US policy is a continuing process. Death by a thousand cuts.”

Featured image: Doctors have recently been expelled from Bolivia and Brazil and returned to Cuba. Photograph: Reuters