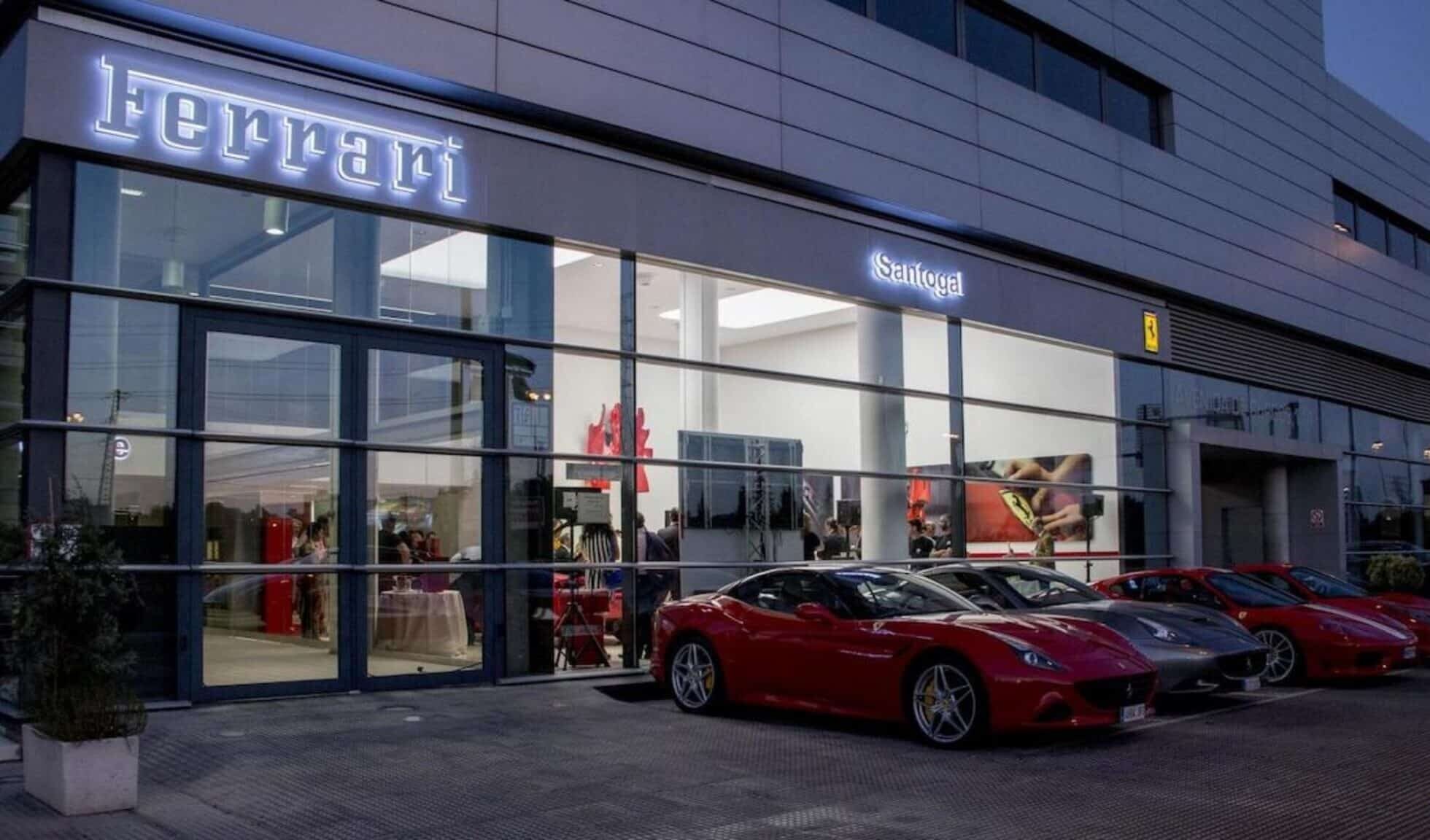 This photo of a Ferrari store in eastern Caracas, that opened a few months ago, has ignited a debate about the real dimension of Venezuela's economic recovery. File photo.

Who invented the phrase “Venezuela is fixed”? How did it spread? How did it reach the position it has today as a narrative tool?

These are not minor questions, because if we try to find out the origin of the phrase, a simple Google search takes us to thousands of posts on social media platforms and even headlines of various shades, from local media to The Washington Post to DW from Germany.

A very minimal analysis of the semiotics of discourse tells us that when a phrase reaches the category of “viral” it acquires meaning according to its use and context.

“Venezuela is fixed” is a phrase used by some people to sincerely refer to an improvement in some areas of the country.

It is also a celebrity phrase used by clowns, influencers and content generators to exhibit their (small or large) privileges. I mean, I’m talking about people who take pictures of their food and who say that two hot dogs for a dollar or a hamburger is a trait of a country that “is fixed.” By this I am referencing that SM underworld which is full of hollow and tawdry content.

However, perhaps the predominant use of the phrase is ironic, a mocking trill about the situation of the country and of Venezuelans, similar to the misrepresentation made of Comandante Chávez’s phrase “but we have a homeland.”

The phrase “Venezuela is fixed” in an ironic sense implicitly refers to the fact that nothing has improved, but more importantly, the sarcastic phrase implies a tacit mockery of those of us who live in the country and of our situation.

Perhaps the most curious fact about the phrase is its own propagation. Because it is favored by social media algorithms, because it has thousands of influencers and users posting it daily, and since it is even replicated in the international media, it has enviable place in the media landscape. Is this coincidental or intentional?

THE CONTEXT: ECONOMY VERSUS STORIES
“Venezuela is fixed” was born with the bodegones [groceries stores with imported food], but it has been replicating itself, especially since mid-2021, just when some modest and still superficial features of the economic recovery were beginning to become evident in Venezuela.

At this point, the stories of recovery emanating from Chavismo were converging, but beyond these, stories from social media users of various kinds have built a perception based on real facts. Since the end of 2021, the GDP has been starting to recover, the state has been getting around the blockade somewhat, and the export of crude oil has recovered by just a few hundred thousand barrels, there is full supply, commercial activity has increased and consumption has recovered modestly. The perception of improvement has become real.

Already in mid-2022, although the economy had acquired a diversified impetus and a certain robustness in very specific areas, far beyond the bodegones, the phrase has continued to develop, diversifying its spectrum of scope, both in its positive and negative versions.

Speaking of the negative version, which is where the phrase is most common, it is used ironically to refer not only to the economy (from which the phrase is born), but also to refer today to the state of public services, the insecurity, and the unfair commercial practices in the private sector, or even to the state bureaucracy (al Saime, for example in charge of issuing passports and ID’s), and so on.

However, the current context continues to be fertile for these ironic tweets, because in effect there are real objective conditions of recovery cohabiting with old and new negative situations, hence a context full of paradoxes offers a very favorable habitat for these stories. After all, the stories, regardless of their origin and purpose, are a reflection (reliable or constructed) of the time and place where they take place.

It is the peculiarities of the Venezuelan national context that help us understand the “viral” power of the aforementioned phrase.

SCOPE AND PURPOSE
It should be considered that with the new technologies of mass communication, and even more so, in the case of Venezuela, there is no room for innocence or coincidence with regards to narratives. The phrase “Venezuela is fixed” demands an analysis of its scope and purposes.

Regardless of its origin, it is a phrase in which negative uses predominate, through denunciation and irony. That is obvious, but we will have to dig more.

Returning to the context, the phrase contributes to erasing from the map other stories founded on real grounds, such as the blockade against the country, which is the critical hub of state finances and the epicenter of many areas that generate discontent and discomfort. The phrase “Venezuela is fixed” as a narrative vehicle buries the real story, since the blockade still exists.

The public conversation (that is, the point of confluence of the narratives) is also the point where part of the expectations of the audiences is built.

The viral social media images showing things such as members of “the Venezuela Premium,” a Ferrari store east of Caracas, rich people defecating in buckets on top of a tepuis [a mountain plateau], a girl going with her “sugar daddy” on a yacht to Los Juanes, or simply ordinary people, but definitely poor, who post on social media platforms about their oversized, dripping hamburger, are intentionally or not also promoting the Venezuela that “is fixed”, at least for them or from their point of view. Then they are followed by the users who spread that content on social media platforms.

These exaggerated versions of “reality” implicitly propagate a false expectation, exaggerating the recovery. Certainly, the real economic recovery does not converge in the same way on the entire population, less so when the state does not have the income to reduce inequalities, as it was until a few years ago.

But the story that the country “is fixed,” by using a narrative to undermine the reality of the blockade and the deprivation of the country’s main sources of income, by context and by extension, imposes a new underlying story that could become dominant: that “everyone” should be much better right now and that everything should be better.

We should be better off, enjoy certain luxuries or have certain purchasing power. Or: everything that has to come from the state must work, because there is no lack of resources. “Venezuela is already fixed.”

Read this way, the denunciation, the irony, or the “positive attitude” in the use of the phrase, are vehicles to position it. But by positioning itself, every idea-force enters the psyche (the collective psychology), and then settles in our limbic system without having an exit point.

If we understand the phrase “Venezuela is fixed” as a vehicle for propagating false expectations and triggering sentimental reactions, in contrast to the national reality, the it is a narrative vehicle that generates frustration.

In other words, perhaps the scope and purposes of the induced propagation of that phrase is within the framework of a psychological operation. Psychological operations have the attribute that they are developed through diffuse and multifunctional narrative vehicles, without authors or apparent purposes.

For example, if we review public affairs in Venezuela, with regards to public salary policy and the direct scope of the budget for the population, it is true that salaries today are better than in 2019 and 2020 (according to a calculation in dollars), but that salary level does not correspond to the expectations and needs of public employees.

Although inflation has slowed down, although there has been stability in the exchange rate (compared to previous years) and although the state has relaunched several areas of management, reality continues to clash with social expectations, especially on key issues, such as salaries for public servants, even though it has recovered partially but significantly.

Being a fact that the blockade is still almost intact, that the state’s income limits continue to be forceful, and taking for granted that public resources are not covering all the demands, the only really new element in the composition of the generators of discomfort is in the system of expectations and is linked to the palpable anxiety of citizens to see themselves favored by improvement. On this, the positioned expectation of the country that “is already fixed” has an incremental effect.

Expectations always come into contrast with reality even though they have direct links with each other. For this reason, in some cases large-scale psychological operations deepen this contrast, increasing it and directing it to specific ends, as referred to in the US Armed Forces Psychological Operations Manual.

In the case of target countries such as Venezuela, operations of this nature make up the picture of wars of a new type. Understanding that the country has been surrounded by material deprivation, especially since 2017 with the advent of the blockade, the objective is still to break Chavismo, promote disaffiliation, demoralization, loss of national cohesion, exacerbate social unrest and promote discouragement, regardless of whether the economy is recovering.

Due to both its negative and other apparently “positive” denominations, the phrase “Venezuela is fixed” increases pessimism and fosters frustration by building and increasing false expectations.

Consider that these elements are key to building a negative mood in the long term, obviously there is a political agenda behind it. It is urgent to assume this, or continue to just believe that we live in a country where the great media campaigns on social media platforms occur spontaneously.