This Tuesday, September 20, the Venezuelan state officially regained control of the petrochemical company Monómeros, after Colombian and Venezuelan authorities signed an agreement in this regard. The Venezuelan ambassador to Colombia, Félix Plasencia, indicated this Monday that the recovery of Monómeros ends “the interventionist, treacherous, and irresponsible claim” that has harmed Venezuelans in recent years, detrimentally affecting the interests of the population.

During the presidency of Iván Duque, control of Monómeros was handed over to a group appointed by Juan Guaidó, the alleged Venezuelan “interim president” recognized by the Colombian government at the time. Guaidó’s management was responsible for the imminent bankruptcy of the multi-million dollar firm and multiple corruption scandals that are currently under investigation.

In this regard, Plasencia explained that “the order, the legality, the true operation of things is back to normal. All that evil, mistaken, aggressive construction, which also affected the interests of the Venezuelan and Colombian people, ends. This is the end of a negative arrangement to harm, to irritate, to make the Venezuelan people suffer.” Plasencia added that, thanks to the leadership of the government of President Maduro, it was possible to put an end to the conspiracy that primarily affected ordinary working people.

For his part, the Superintendent of Colombian Companies Billy Escobar stated that his country recognizes the appointment of the new board of directors for the company and that the action is protected by the Colombian legal framework. “We ratify the will of the Venezuelan government to appoint a board of directors, and that corresponds to the legality that is handled in the Colombian state in relation to the owners of a company that have the possibility of choosing its own board,” he said.

This decision put an end to days of speculations and reports claiming that the Colombian government was not going to be able to transfer the management of Monómeros to the Venezuelan government led by President Maduro, due to US Office of Foreign Assets Control (OFAC) restrictions.

President of Pequiven visits Barranquilla
Monómeros is a Venezuelan state-owned company that operates in Colombian territory, in Barranquilla, since 1967, when it had the Colombian Petroleum Company (ECOPETROL) and the Colombian Industrial Investment Institute (IFI) as shareholders, in addition to Petroquimica Venezonala S.A. (Pequiven), a subsidiary of Petroleos de Venezuela (PDVSA). In 2006, Pequiven took full control of the company by buying ECOPETROL and IFI shares.

This Tuesday, September 20, the president of Pequiven, Pedro Rafael Tellechea Ruíz, reported that on Wednesday, the new board of directors of the petrochemical company Monómeros will be appointed. Upon his arrival at the company’s headquarters in Barranquilla, Colombia, Tellechea, in a meeting with the workers, announced the first changes after recovering control of the petrochemical company.

“Today we are holding assemblies with the workers and tomorrow (Wednesday) we are going to announce the new board of directors,” Tellechea said in statements broadcast by Venezolana de Televisión (VTV).

In addition, he reported on the arrival for this Wednesday of the first ship to Colombia with Venezuelan raw materials. “I ask for all the support to unload the ship as soon as possible.” 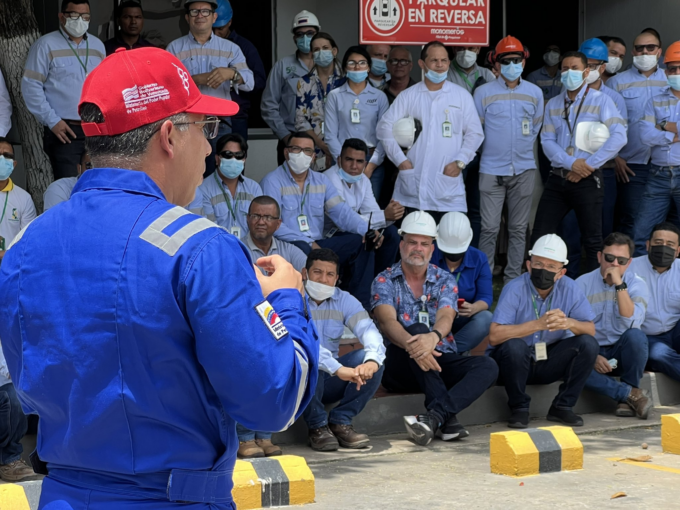 Tellechea asserted that his work will be framed within the recovery of Monómeros, so that it can once again be Venezuela’s primary productive company in Colombia. Likewise, he assured the workers that they will continue their work for the petrochemical company, and described them as the most important asset of the company.

“We are going to recover our installed capacity, to recover the Colombian and Venezuelan agrarian system, and with a sustained growth scheme over time,” he emphasized.

The petrochemical company Monómeros was seized by a group led by Juan Guaidó and Julio Borges, with the support of former Colombian President Iván Duque, who carried out an international campaign to strip Venezuela of assets and resources abroad in a failed US-led attempt to oust Venezuelan President Nicolas Maduro.