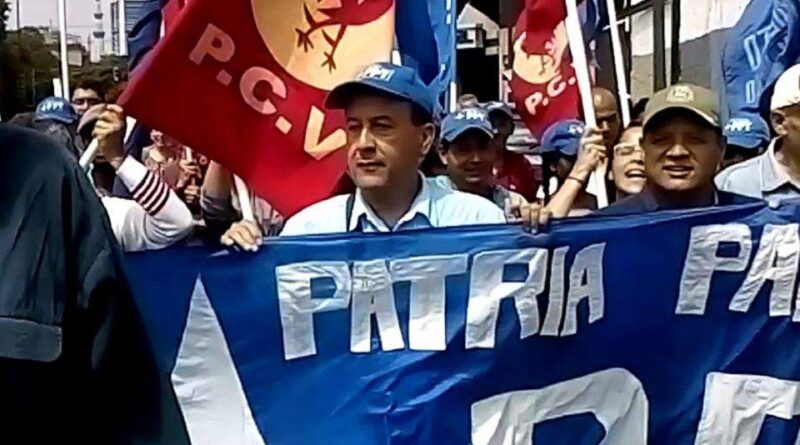 The Popular Revolutionary Alternative (APR) looks to include grassroots movements but not the ruling PSUV.

Mérida, August 10, 2020 (venezuelanalysis.com) – Two major Venezuelan left-wing parties have announced that they will not be backing government candidates in the upcoming December 6 parliamentary elections.

For the first time, the Homeland for All Party (PPT) and Communist Party of Venezuela (PCV) are set to lead a broad alternative coalition for the 277 seats up for grabs. Apart from the two parties, the inaugural Popular Revolutionary Alternative(APR) will look to incorporate trade unions, social movements, LGBTIQ groups, communes and campesinos organisations, as well as a range of smaller leftist currents.

The coalition will not include previous allies such as the United Socialist Party (PSUV) or smaller parties including MEP, Tupamaro, UPV or ORA, which, at the time of writing, are expected to back the government’s set of candidates.

While both the PPT and PCV have independently challenged government candidates in specific localities in the past, the new alliance marks the first time that the parties join forces independently from the government on a nationwide scale. Since the announcement, APR representatives have held popular meetings and assemblies to discuss candidates and strategies in a range of states, including Barinas, La Guaira, Lara and Carabobo.

“The APR is born to defend the working people against imperialist attacks and the shortcomings of reformism, against policies which destroy wages, allow for layoffs and attacks against campesinos in favour of the bourgeoisie and large landowners,” tweeted the PCV last week. For its part, the PPT wrote that “The APR is a historic necessity which has come out of the coming together of all of us who struggle to defend the victories of the revolution,” adding that the coalition will “transcend the electoral [moment].”

Despite launching alternative candidates for December, both the PPT and PCV have vowed to remain in the Simon Bolivar Great Patriotic Pole (GPPSB), the umbrella coalition which brings together Chavista parties, trade unions, intellectuals and social movements.

Following the unveiling of the new coalition, President Nicolas Maduro was quick to call for “unity,” while, as in recent electoral processes, PSUV number two Diosdado Cabello took aim at the PPT and PCV for allegedly “sowing divisionism.”

RELATED CONTENT: Reopening Week in Venezuela: These are the Two Levels and Where They are Applied

Both the PPT and PCV have continuously backed the Bolivarian process and have largely supported the ruling PSUV since its foundation in 2007. They have consistently pledged their much smaller electoral tallies to PSUV presidential, gubernatorial and municipal candidates.

More recently, however, the parties have converged in criticising a range of government measures, including the privatisation of public assets, impunity for escalating rural violence, policies marginalising communal empowerment and an economic agenda dubbed ‘anti-worker’. The PCV has also denounced what it claims to be the PSUV’s almost complete failure to comply with the 18-point alliance which guaranteed the Communist Party’s backing of Maduro for president in 2018.

Alongside APR candidates, PSUV and opposition candidates are due to formalise their registrations this week with the National Electoral Council (CNE), as preparations for the elections move forward.

According to CNE President Indira Alfonzo, 251,398 new voters have signed up to vote for the National Assembly, with a total of 20,733,941 eligible to participate.

Likewise, CNE authorities have submitted a bioprotection preparation plan for the elections to the Pan-American Health Organisation in efforts to limit the impact of growing COVID-19 cases.

Alfonzo also confirmed that 107 political parties have been authorised to run in December, including 30 national parties, 53 regional parties and a host of indigenous parties. Recent changes to electoral law mean that Venezuela is due to return to a system of greater proportional representation, with 48 of the 277 deputies to be elected on a national list. Analysts have argued that the new rules favour smaller parties’ possibilities of winning seats.

Apart from left and centre-left parties, a plethora of opposition parties are also planning on participating. In contrast, hardline parties grouped around former self-proclaimed “Interim President” Juan Guaido have vowed to boycott the elections.

Featured image: The Communist Party of Venezuela and Homeland for All Party are leading a new alliance without the government for the upcoming parliamentary elections. (Tal Cual)