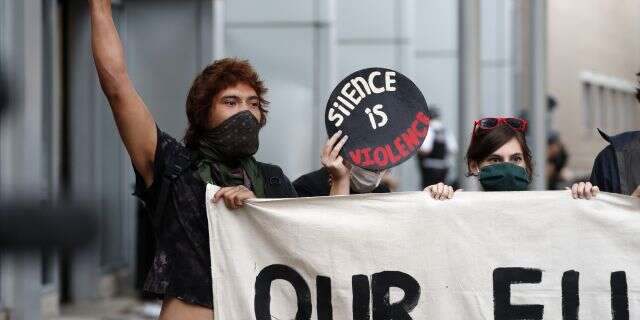 August 10, 2020.- Chicago, IL – Chicago police shot a 20-year-old Black man, Latrell Allen, in the Englewood neighborhood on Sunday afternoon, August 9. His mother told the media that he was shot five times, and she and an eyewitness both said he didn’t have a gun at the time.

Community members angrily challenged the police. In response, the cops became brutal. One eyewitness, Joseph Williams, described on social media, “When I came out, the police were literally whupping a young man. One of them even kicked him in the face, which led to the blood on the ground,” as he pointed to a stain on the pavement.

The police escalated. Pictures showed as many as 100 cops, a number with assault weapons, facing off against community members.

RELATED CONTENT: Iowans With Past Criminal Convictions Can Now Vote

Later that evening, as anger grew, hundreds of young people made their way downtown to the Magnificent Mile, one of the most expensive shopping districts in the country. They broke windows and helped themselves to the contents. They engaged in cat-and-mouse tactics with the cops for hours, ending finally at 5 a.m.

In response, the Chicago Alliance Against Racist and Political Repression, Black Lives Matter-Chicago, Good Kids/Mad City, and Southsiders Organized for Unity and Liberation have called a solidarity protest at the 7th District police station, Tuesday night, August 11, at 6 p.m. Frank Chapman from the Alliance said, “A Black youth was shot in the back in the streets of Chicago yesterday, and there was a rebellion in the Mag Mile. No justice, no peace! Let’s get back in the streets!”

The protest will call for community control of the police through an elected, civilian police accountability council (CPAC). The protest will also call for defunding the police and redirecting the monies from the $1.7 billion annual budget to meeting social needs.