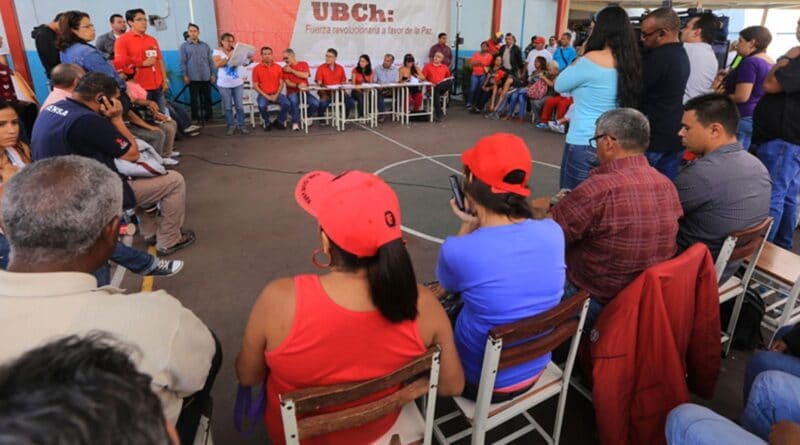 Maduro explained on Tuesday that all Venezuelans in the country’s electoral roll are called to participate in the PSUV primaries on August 8 alongside over seven million registered party members “so that grassroots are the ones who choose the Revolution’s candidates.”

“The PSUV militancy and the Venezuelan people will be summoned as a whole for grassroots primaries, open primaries, so that everyone can choose candidates based on the nominations made by the assemblies,” the president stressed during a party meeting in Caracas.

The ruling party candidates for the primary elections will be chosen on June 27 by 14,381 local Bolívar Chávez Battle Units’ (UBCh). The grassroots assemblies will nominate “all the candidates secretly and directly,” a PSUV statement indicates.

RELATED CONTENT: How Chavismo Will Select Candidates for November Mega-Election

The UBCh nominations are the first stage in the PSUV’s internal process to choose its candidates for governors, mayors, as well as local and regional legislators. Elías Jaua, member of the party’s direction, indicated that ballots would be submitted to public counting. Afterward, the lists of pre-candidates will be sent to the PSUV’s national electoral commission for evaluation, and the final candidates for the November races will emerge from the August 8 open primary elections.

Jaua, who has held several high-ranking posts under Hugo Chávez and Maduro’s governments, praised the PSUV call for open primary elections. “It’s a decision that aims at democratization, re-politicization and reunification around authentic leadership,” he argued.

The former minister and vice president had been critical of top-down party practices in the past. On this occasion, he highlighted that “the right to choose and be elected will always be a principle treasured by the people.”

Likewise, National Assembly deputy and PSUV activist Rigel Sergent told Venezuelanalysis that “grassroots participation is essential” and “one of the principles that must govern a revolutionary party.”

“Consulting with the people has to be permanent and not just for electoral processes,” he added. Sergent, who comes from the tenants’ movement, stressed the need to hear workers, given acts of corruption and ineffectiveness recently revealed in state-owned companies, and argued that grassroots participation should be “binding.”

The newly appointed National Electoral Council (CNE) scheduled “mega-elections” for November 21 to choose authorities for 23 governorships and 335 municipalities, as well as representatives for regional and local legislative chambers. So far, 111 political organizations are allowed to take part, with the CNE board pledging to revisit the disqualifications of several anti-government figures.

Furthermore, the CNE board opened registration for new voters, while others can update their information and change voting centers until July 15. More than 21 million citizens are in the current electoral roll, issued before the December 6, 2020 parliamentary elections.

Following the appointment of two high-profile opposition members among the five-person CNE board, over 20 minority center-right and right-wing parties, gathered in the Democratic Alliance, announced they will run in a joint list. Their goal is to secure gains after overwhelming PSUV victories in the 2020 legislative vote and regional elections held in October and December 2017. Mainstream opposition parties boycotted all three processes.

However, the November 21 regional elections could change the country’s political landscape with major opposition parties poised to return to democratic contests. Longtime anti-Chavista leader and two-time former presidential candidate Henrique Capriles expressed confidence in the new CNE and the upcoming races. Similarly, former presidential candidate and Lara governor Henri Falcón said the Democratic Alliance would boost “chances of success in the regional governments” for the opposition.

For his part, self-proclaimed “interim president” Juan Guaidó has ruled out participating in the regional election after not recognizing the new CNE. In contrast, the US-backed politician is pushing a “National Salvation Agreement” that includes a negotiation process with the Maduro government to hold early presidential and parliamentary races in exchange for an alleged gradual US-led sanctions relief.

Venezuela’s Constitution mandates that regional and municipal authorities be renewed this year, and the November 21 “mega-elections” will be the 26th electoral process since 1998. CNE head Pedro Calzadilla confirmed that international observers will be invited to accompany the vote.