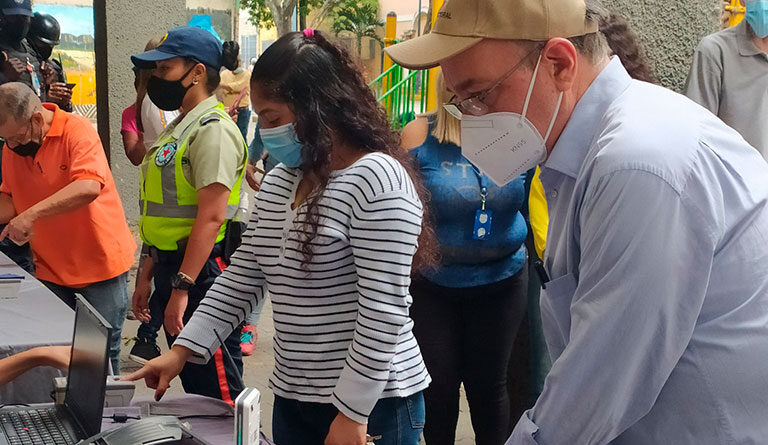 This Thursday, June 3, Venezuela’s Electoral Power, the National Electoral Council (CNE), confirmed that it has already sent the first invitations to summon international observers who will participate in the regional and local elections to be held on November 21 of this year.

In this regard, the president of the electoral body, Pedro Calzadilla, reported that when the assistance of international companions is confirmed it will be announced to the public in a timely manner.

“Part of the calendar, as always, includes international colleagues,” said the rector. “We have already sent the invitations and it is an agenda that is open and in the making.”

Similarly, Calzadilla highlighted the vitality with which the fulfillment of the calendar is progressing as planned.

Update and electoral registration
From the Pérez Bonalde area, in the Sucre parish in the west of Caracas, the president of the CNE highlighted that in a thousand locations distributed throughout Venezuela, the Electoral Power is promoting conditions to guarantee the greatest possible participation.

“This week the deployment of the very important first stage of the schedule began: the day of registration and updating that since Tuesday is being carried out throughout the territory.”

Calzadilla offered the statements at the end of his visit to the electoral center, where he took the opportunity to update his data. He explained that, in the midst of the pandemic, it is difficult to travel to the voting sites that are historically used, and that they are not always the closest.

“Today I have updated my place of residence to have a voting center assigned closer to where I currently live,” explained the president of the Electoral Power. “It is a change that I had pending and I have done it in the best way. The work of the colleagues who are attending to these locations is very efficient, extraordinary, impeccable, and without any hiccups.”

He added that as part of the lead-up to the electoral process in November he sent a message to younger citizens who are coming of age, including those who will turn 18 before November 21 of this year.

Similarly, Calzadilla confirmed that, for this occasion, all organizations with political purposes have the possibility of accrediting with the CNE witnesses that they wish to assign to the voting centers to observe the update and registration process.

Registration Until July 15
For his part, the principal rector Alexis Corredor, president of the registration commission, ratified this invitation. He encouraged Venezuelans to enroll with the electoral registration process and update their data if necessary.

“In the past two days we are very happy to see how our people have responded because, despite the situation due to the pandemic, the participation has been very positive,” said Corredor.

The CNE considers the public response to update sessions as very auspicious. In addition, the electoral authorities recognized the staff of the Electoral Power as highly trained professionals and committed workers, civic-minded and spirited.