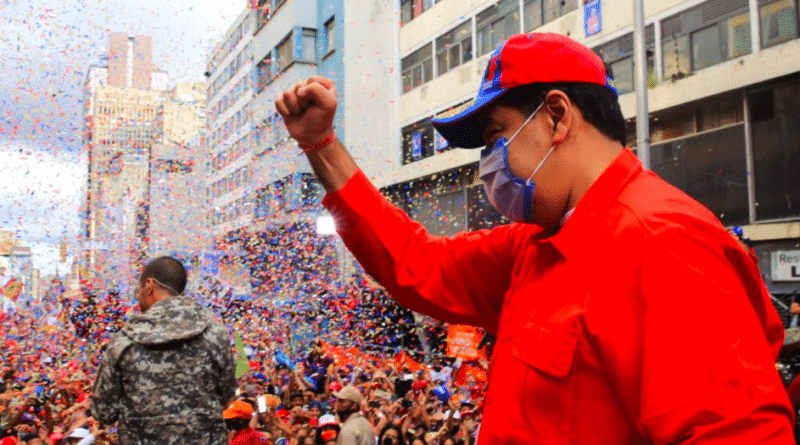 Chavismo will select the contenders for the regional and municipal elections of November 21 through a methodology that will allow the Chavista bases to directly nominate their candidates.

This was announced by President Nicolás Maduro, who is also president of the United Socialist Party of Venezuela (PSUV), the largest political group within the Great Patriotic Pole (GPP) alliance.

“Comrade Diosdado Cabello has issued a comprehensive proposal for the purpose of consulting the consensus of the party bases,” stated Maduro. ”For it is among the bases where the candidates for governors, mayors, deputies and councilors for the November 21 mega-election should be chosen.”

RELATED CONTENT: Chavismo Gets Ready to Roll for November Elections

According to the president, through this methodology, candidates can directly emerge from militant popular organizational structures as the Units of Battle Hugo Chávez (UBCH). Maduro also asserted that this will open the way for a selection system that will eventually include primary elections.

Maduro commented that the document presented by the PSUV national leadership had been subjected to an intense debate in order to come up with new strategies, which have been initially approved and which will designate the campaign route.

”With this route and this methodology,” stated the president, ”we have decided to open up consultations to our parish directorates, to the UBCH, to the municipal and regional directorates of the PSUV and to the JPSUV. We plan to hold seven days of consultation.”

How will the consultation take place?
President Maduro informed that, from May 25 to May 27, the vice presidents of PSUV and its youth wing will collect opinions throughout the country. Then, between May 28 and May 30, the collected proposals will be included in a final document.

Maduro added that, in order to conduct the consultation process, an internal electoral commission has been unanimously appointed to govern the consultation as well as the appointment of leaders who will run for the 23 governorships and 335 mayoral posts, as well as for the legislative councils and the municipal councils of the entire country.

”This commission is made up of 10 persons: five men and five women, to guarantee gender parity,” Maduro informed. The commission will be presided by Diosdado Cabello, and the other members are Jorge Rodríguez, Julio León Heredia, Francisco Ameliach, Rodbexa Poleo, Tania Díaz, Francisco Fonseca, Cilia Flores, Diva Guzmán, and Aloha Nuñez.

After receiving the proposals from all states, the PSUV leadership will discuss them, and the final document will be issued after the candidatures get approved.

With these measures, the consultation process will be established in earnest by May 31. Then will start the decision-making process regarding the names of those who will present their candidacies for the November 21 elections.

An example of democracy
President Nicolás Maduro reminded everyone that registration for the permanent electoral registry begins on June 1. For this reason, he urged the activists of the party to encourage the rank and file through the work of community leaders, as well as leaders of the UBCH.

Maduro also mentioned that there will be 782 registration points throughout the country, and called upon everyone to help everyone else with travel and transport, so that anyone who is not yet registered can get their names in the electoral rolls and participate in the mega-election. ”Let it be a peaceful election,” urged the president. ”Let it be that a lively debate of ideas and direct, flesh-and-blood deliberations among candidates prevail in Venezuela.”

Maduro also reiterated that no other country has held 26 elections within the same period of time as Venezuela has completed under the Bolivarian Revolution, not even in countries that constantly attack Venezuela, such as Colombia, which is currently undergoing an intense sociopolitical crisis, or the United States, that imposes deadly sanctions on Venezuela.