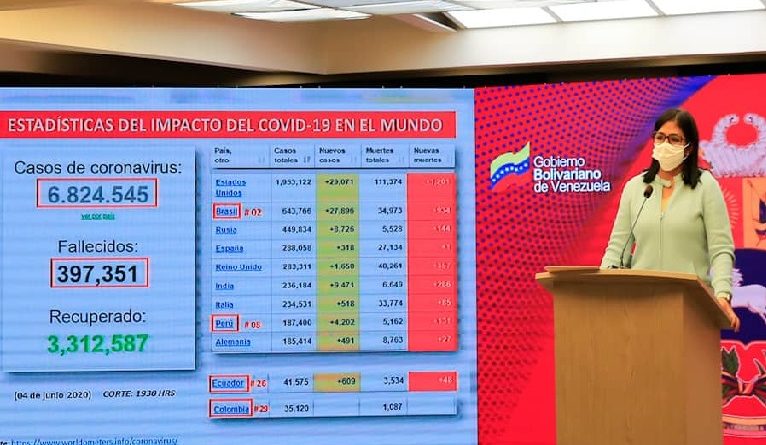 Venezuelan Vice President, Delcy Rodríguez reported this Friday that Venezuela arrived at 1,009,524 tests for the detection of Covid-19. “Venezuela has applied 1 million 9 thousand 524 tests, which represents 33 thousand 651 tests per million inhabitants. In the coming days, millions of more tests for this detection process will be reaching the entire population,” she explained.

Rodríguez announced that “millions more tests will be arriving in the next few days,” stressing also that “the epicenter of the pandemic is South America, when you compare South America with Africa or Europe, you will notice that South America is in the first place, together with the US that today, more than 111 thousand people died today, unfortunately,” she added.

From Miraflores Palace, the vice-president reported that in the last 24 hours, Venezuela has registered 7 new cases of community transmission, one from Aragua state, 5 from Mérida state and one from Miranda state.

She explained that each of the community transmission cases are:

She also reported that this Friday there are 51 imported cases. “88% of today’s cases are imported: 39 from Colombia, 7 from Ecuador, 2 from Peru and 3 from contact with international travelers,” she emphasized.

She highlighted that of the 2,145 cases registered in the country, 78% correspond to imported cases. “Only from Colombia 1,001 infected cases have arrived, from Brazil 193, from Peru 54, from Ecuador 40, from Spain 29, among others,” she said.

She stressed that since April 6, Venezuela has received 55,048 compatriots who have entered through the border areas, despite the criminal economic blockade, assuring that Venezuela is giving a comprehensive response of socioeconomic and health care.