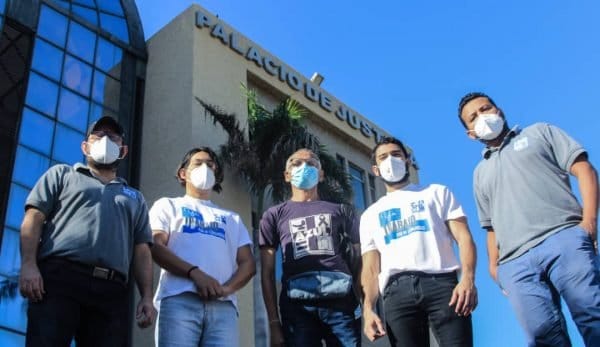 This Thursday, February 18, Venezuelan Foreign Affairs Minister Jorge Arreaza expressed the categorical rejection of the interventionist position assumed by a group of representatives of the Special Procedures of the Human Rights Council (HRC), who misrepresented the judicial investigations of alleged violations of Venezuelan law by the Non-Governmental Organization Azul Positivo.

On February 18, the Special Procedures of the UNHRC shared on social media a statement urging “Venezuelan authorities to stop the continuous, increasing attacks and intimidation against NGOs and journalists.”

In a communiqué posted by the Arreaza on Twitter, the Ministry of Foreign Affairs stated that “Venezuela observes with concern the evident misrepresentation made by this group of representatives of Special Procedures, in view of the judicial inquiries into the NGO, following the detection of a transfer of funds in foreign currency, using a process not authorized, nor covered by Venezuelan law.”

The communiqué reiterated that the pronouncement by the group of Special Procedures of the HRC displayed “a profound ignorance of the Venezuelan legal system and qualifies facts without knowing their true legal implications,” which is why Venezuela repudiated the position of representatives of this intergovernmental body of the United Nations.

Venezuela considered that “these interventionist and inaccurate statements are intended to manipulate international public opinion, cloud the country’s cooperation with the United Nations System, including the Office of the High Commissioner for Human Rights, and… contribute nothing to the strengthening of humanitarian action in Venezuela.”

Who is handling @UNGeneva Twitter account? Donald Trump or Mike Pompeo? This NGO has violated Venezuelan law and it has all guaranties of due process. https://t.co/OwYA7n83mi

Below is the full unofficial translation of the communiqué:

“The Bolivarian Republic of Venezuela categorically rejects the statement published by a group of representatives of the Special Procedures of the Human Rights Council, on February 18, 2021, which denotes a profound ignorance of the Venezuelan legal system and describes facts without knowing their true legal implications.

In this sense, Venezuela notes with concern the evident misrepresentation with which this group of representatives of the Special Procedures incurs, in light of the judicial inquiries made to the Non-Governmental Organization Azul Positivo, after [Venezuelan authorities] detected the transfer of resources in foreign currency to individuals under an unauthorized financial process, not authorized, nor covered by Venezuelan law. As in any judicial process that takes place in Venezuela, the members of the NGO involved in this case have the full guarantee of due process and the right to their defense.

The biased opinions of these representatives are contrary to the principles established in resolution 46/182 of the United Nations General Assembly of 1991, which highlights respect for sovereignty, territorial integrity and the requirement of the consent of the respective States in the exercise of humanitarian work.

The Bolivarian Republic of Venezuela denounces these interventionist and decontextualized statements, which seek to manipulate international public opinion, cloud the country’s cooperation with the United Nations System, including the Office of the High Commissioner for Human Rights, and which contribute nothing to the strengthening of humanitarian action in Venezuela ”.

Azul Positivo is a relatively small NGO based in Maracaibo, Zulia state, near the border with Colombia, focused on prevention and education around HIV. Since the beginning of the pandemic it has also worked on COVID-19 issues. It was founded in 2006. Orinoco Tribune sought without success to discover any foreign funding sources by visiting its website and other relevant sources. A reference to Venezuelan government funding was found in their 2007 archives. The NGO distributed medical materials from the Pan American Health Organization (PAHO), the regional office for the World Health Organization office in the hemisphere. The NGO’s Twitter account is https://twitter.com/AzulPositivo.

Five of their members were arrested on January 12 by the Military Counter Intelligence Directorate (DIGECIM) for alleged money laundering. Their names are Johan León Reyes, Yordy Bermúdez Gutiérrez, Layners Gutiérrez Díaz, Alejandro Gómez Di Maggio and Luis Ferrebuz. PROVEA, a US-financed Venezuelan NGO, has been very active in the campaign against their arrest.

On February 10, 2021, the members of the NGO were released from prison, but the legal process continues.