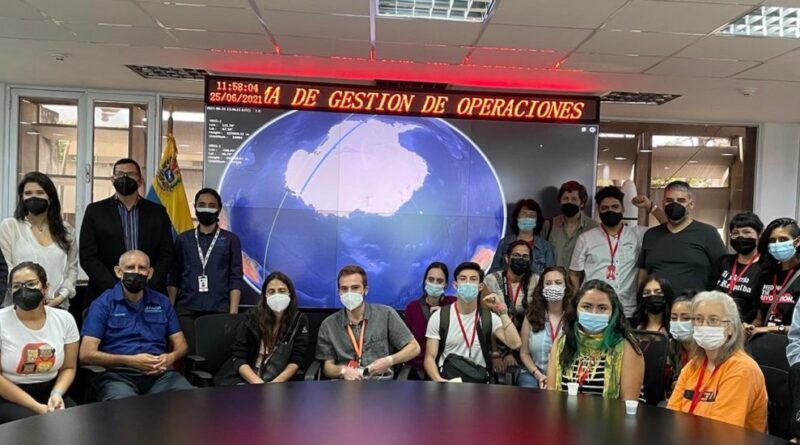 The following article was written following a Party for Socialism and Liberation delegation to the recently held Bicentennial Congress of the Peoples of the World held in Caracas, Venezuela. The delegation participated in a tour of the Bolivarian Agency for Space Activities center in Caracas (ABAE).

After much investment, determination, and assistance from other countries, particularly China, Venezuela now manages the Simon Bolivar, Miranda and Sucre satellites. The technological advancements and the space program are a massive achievement necessary for formerly-colonized nations. These have brought benefits in telecommunications and peaceful development to the people of a historically underdeveloped region of the world.

It’s hard to overstate the political significance for a country like Venezuela, which is now able to fully direct the management of its own natural resources. Venezuela does not have to rely on foreign corporations for information about its own mineral wealth.

Standing in the way of all this, and threatening to destroy the space program, are devastating sanctions unilaterally imposed by the United States — first under the Obama administration then expanded under Trump and Biden. The sanctions have caused misery and even the death of tens of thousands of Venezuelans. The sanctions threaten to undo all the advancements of the Bolivarian movement. This is why internationalists and antiwar activists in the United States are urgently demanding an end to this brutal imperialist policy with organizations like the Cuba and Venezuela Solidarity Committee.

Knowledge is power in the struggle against imperialism
When announcing the construction of Miranda, Venezuela’s second satellite, President Hugo Chávez commented, “This [satellite] means the recovering of independence, and will pave the way for recovering goods for the homeland.”

It’s well known that in an imperialist-dominated world, the natural resources of the colonized nations are plundered for capitalist production. The wealth of the people is diverted into the coffers of multinational corporations. Under imperialism the colonized countries were set up as “banana republics.” They were only good for the production of a single commodity to be consumed abroad.

For Latin America, this is the preferred order for the U.S. government, which openly declared its dominance in the region famously in the “Monroe Doctrine.” The doctrine was originally laid out in an 1823 speech to Congress by then President James Monroe. He said, “We owe it … to declare, that we should consider any attempt [by European powers] to extend their system to any portion of this hemisphere, as dangerous to our peace and safety.” In other words “Latin America is our backyard, don’t mess with it.”

To maintain this arrangement the leadership of colonialist and imperialist countries prevented the political or economic independence of the subjected nations. This took the form of military invasions, installing military dictatorships, coups and covert operations. The imperialists also sought to prevent the development of technology and scientific advancements, which can give a country an economic edge.

Countries like Venezuela are in the midst of overthrowing the imperialist arrangement and taking back control of their own destiny. Rather than just being a “banana republic” for the rich countries, the aim of Venezuela’s socialist Bolivarian Revolution is to invest in the needs of their people, like dignified homes, healthcare and education.

In order to provide for the people, Venezuela had to take back control of its natural resources from the corporations. This could only be accomplished with their own technological and scientific advancement.

Venezuela’s satellites are not just for surfing the internet or taking pictures of the Earth, they are measurement tools. With the satellites they are able to predict what minerals they have underground and where. Prior to this they had to purchase this information from corporations who had access to satellite-generated data. When a mining company sought a contract on Venezuela’s land to extract coal, for example, Venezuela could not on their own determine if the location actually also had “blue gold,” or coltan, which is a valuable mineral used for electronics.

Revolutionary constitution affirms need for technology and space activities
In 1999, the newly elected and massively popular President Chávez, helped initiate a mass referendum which created the new constitution of the republic. The construction of a new constitution was a central pillar of his campaign to address the popular demands of the people.

The makers of their new constitution wrote in article 11, “The Republic has rights in outer space and in those areas which are or may be the Common Property of Humanity, on such terms, to such extent and subject to such conditions as may be determined by public international agreements and by the national legislation.”

Later in article 110 they wrote, “The State recognizes as being in the public interest science, technology, knowledge, innovation and the resulting applications, and the necessary information services, the same being fundamental instruments for the country’s economic, social and political development, as well as for national sovereignty and security. To promote and develop these activities, the State shall allocate sufficient resources and shall create a national science and technology system in accordance with law. The private sector shall contribute with resources as well. The State shall guarantee the enforcement of the ethical and legal principles that are to govern research activities in science, humanism and technology. The manners and means of fulfilling this guarantee shall be determined by law.”

Following the framework set by the new constitution the Ministry of Science and Technology was created in 1999 to begin this task. In April 2006, the Venezuelan Space Center Foundation was established. In January 2008, it was reconstituted as the Bolivarian Agency of Space Activities (ABAE).

Venezuela launches its first satellite, then second and third
VeneSat-1, Venezuela’s first satellite, named Simon Bolivar, was launched in 2008 and was designed for telecommunications. It brought free internet access throughout Venezuela including to remote regions of the Amazon.

Not even in the “advanced” United States do all rural areas receive internet access. In the United States, roughly 21 million people lack access to broadband internet nationwide. In West Virginia, upwards of half of the state’s students lacked access. This became a national scandal with the COVID-19 pandemic, which left millions of children without access to quality education.

The Simon Bolivar satellite has since stopped functioning as all satellites have a definite lifespan. There is a new satellite project in the works now, but the sanctions are limiting the ability of the state to finance the project. Before the sanctions, for example, Venezuela made roughly $40 billion per year in oil sales. This figure is currently down to less than $400 million; less than 1% of its former revenue. The construction of a new satellite for Venezuela could cost about $200 million to create.

In addition to the Simon Bolivar satellite, Venezuela also has VRSS-1 (named Miranda) and VRSS-2 (named Sucre), which are remote sensing satellites. Rather than providing telecommunications, these have the capacity to observe the Earth’s surface and transmit that data back to control centers on the ground where it can be analyzed.

Speaking with Liberation News, an official with the space agency noted, “It’s important to understand that these satellites are not just for taking pictures. It’s a tool for measurement which can be used for the greater good.”

With the data, scientists are able to predict the locations and types of minerals underground throughout the country. These satellites are also used for determining the vegetation health of an area, stopping drug trafficking and disaster response assistance.

In the spirit of internationalism, Venezuela has used its satellites to help other countries and is a signatory on the International Charter on Space and Major Disasters. The charter is an agreement to share information gathered from satellites to assist other countries with disaster emergency response. So far Venezuela has provided crucial information on earthquakes, floods, cyclones and fires to countries like Nepal, Ecuador, United States, China, Australia, India, Russia, Costa Rica, Chile and Argentina.