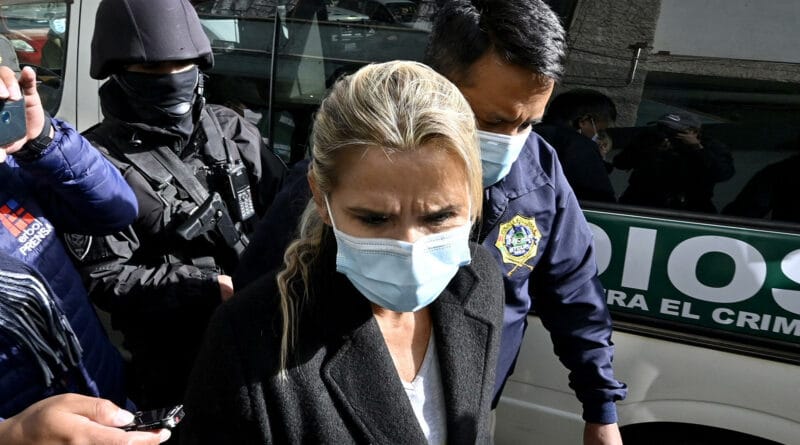 The government of Bolivia has reported that the prison conditions of former de facto President Jeanine Áñez do not pose any risk to her health, after an episode of self-harm.

Through a statement issued on Saturday, August 21, the Bolivian Ministry of the Government indicated that Jeanine Áñez received the necessary healthcare assistance after she had injured herself in her arm at dawn on Saturday in the Miraflores prison.

The statement specified that there is a medical team attending to the former de facto ruler, and the authorities have installed an exceptional infrastructure to take care of her health.

The statement added that Áñez may receive a psychiatric evaluation. “A forensic medical investigation will be carried out to establishe the motives and psychological characteristics of the self harm,” it informed.

The Bolivian Ministry of the Government further reported that Áñez’s family visited her after the incident and that her daughter has decided to stay with her inside the prison.

RELATED CONTENT: Bolivia in the Spotlight: A New Coup in the Making?

Faced with the possibility of releasing the former head of state due to her health situation, the Minister of the Government, Eduardo del Castillo, pointed out that neither the Ministry he heads nor the national government can decide on the release of detainees, which is “an exclusive attribution of the judicial body.”

On March 13, the Bolivian Police arrested the former president for her role in the coup against President Evo Morales in 2019, who had won the presidential election but was forced out in a violent coup. On Friday, August 20, the Bolivian Attorney General Juan Lanchipa presented before the Supreme Court of Justice (TSJ) an injunction against Áñez on charges of genocide, which would carry a prison sentence of 10 to 20 years.

In this regard, Lanchipa explained that the complaint had been filed by relatives of the victims of the massacres of November 15, 2019 in Sacaba (Cochabamba), and on November 19 at the Senkata gas plant in the city of El Alto, near La Paz. Both incidents occurred under the direct command of Áñez, who had by then declared herself president after the constitutional head of state Morales was removed in the coup.

Featured image: Jeanine Áñez was charged this week for her responsibility in the Senkata and Sacaba massacres among other human rights violations. Photo: AFP / Aizar Raldes