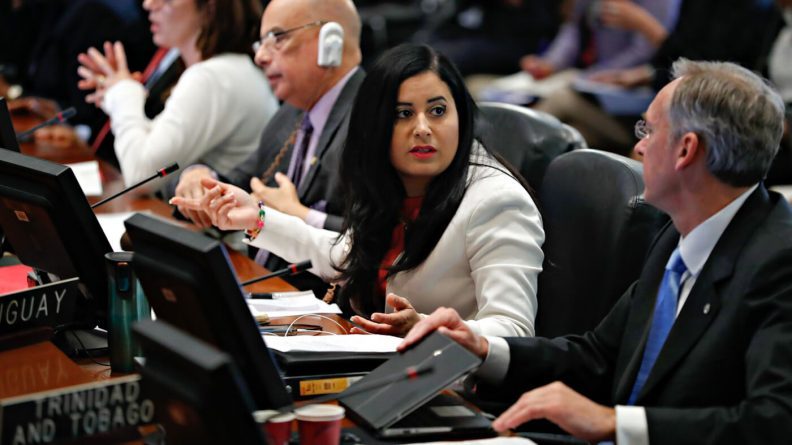 “You have converted the OAS into an empty shell that has violated its own principles and you’re now proving that our decision to resign was the correct one. We are leaving the OAS and we will never come back. — Venezuela representative Asbina Marin

In a bid to legitimize Washington’s flailing coup attempt in Venezuela, the Organization of American States (OAS) has recognized faux-President Juan Guaido’s lackey Gustave Tarre as the new representative from Venezuela.

Reporter Anya Parampil, who was at the meeting in Washington on Tuesday, noted that “Five of the 18 countries that voted for the U.S. measure were recently taken over by pro-IMF governments.” Meanwhile, the Haitian government — currently embroiled in a popular uprising over its mismanagement and embezzlement of funds from a generous deal with Venezuela on petroleum products, known as the PetroCaribe alliance — voted for the measure in order to appease the United States and secure Washington’s support in quashing the uprising.

Parampil notes that the Guaido representative, Gustave Tarre, is a senior associate at the Center for Strategic International Studies (CSIS), an ultra-hawkish D.C.-based think tank funded by defense contractors and the oil industry.

MintPress News has previously reported that Facebook’s head of cybersecurity, Nathaniel Gleicher, is a senior associate at the very same think tank. As the coup attempt was unfolding, Gleicher leveraged his power at Facebook to censor pro-government accounts. MintPress reported at the time:

764 accounts located in Venezuela, a country in which the United States has been backing a coup attempt in since last week, were banned; and another 1,196 accounts ‘which appear to be engaged in a state-backed influence campaign’ in Venezuela were also shuttered.”

Moreover, Tarre was accused by the Venezuelan government in 2014 of being a conspirator in a plot to assassinate President Nicolas Maduro.

Finding loopholes, breaking rules
The OAS Charter affirms the organization’s function, which is, ostensibly, “to promote [members’] solidarity, to strengthen their collaboration, and to defend their sovereignty, their territorial integrity, and their independence.” The OAS branch that voted to admit Tarre, known as the Permanent Council, is charged with “keep[ing] vigilance over the maintenance of friendly relations among the Member States.” Surely, its decision on Tuesday runs counter to its mission statement.

So too does its history: Bolivian President Evo Morales has repeatedly referred to the OAS as the “Ministry of Colonies.”

Parampil grilled U.S. Ambassador to the OAS Carlos Trujillo following the vote, pressing him to provide a legal justification for it. He was unable to do so, and the closest he came was saying that the decision would be revisited by the OAS General Assembly.

On Tuesday I observed the OAS brazenly violate its own rules in order to recognize Guaidó’s ambassador & appease the Trump admin.

I asked US Ambassador Trujillo to explain the vote’s legal basis.

He was unable to cite a single article in the OAS charter. pic.twitter.com/UWUQg99E67

In exclusive comments to MintPress News, Parampil elaborated on what happened:

Diplomats are typically well versed in international law, or at the very least able to legally defend their own actions and initiatives, so it was strange to me that Ambassador Trujillo could not explain himself with the OAS charter. Does he believe in the integrity of the organization or merely see it as a vessel through which to achieve Trump administration foreign policy goals?

The meeting started an hour late, apparently because Trujillo was still whipping up votes down to the last minute just to secure the 18 needed to pass with a simple majority. Considering most OAS states still recognize the Maduro government, it is no wonder the U.S. opted to rush a hollow vote through the permanent council. It could never convince two-thirds of OAS foreign ministers to accept Guaido’s powerless representatives, which is what would be required in order to affirm this decision with the General Assembly.”

With the Permanent Council, a mere simple majority of 18 was required to pass the vote.

You have converted the OAS into an empty shell that has violated its own principles and you’re now proving that our decision to resign was the correct one. We are leaving the OAS and we will never come back.

This day means the end of a chain of violations and traps that, in order to turn the OAS into a weapon against Venezuela, has ended up destroying the entire structure of international law that sustains it. This house, the OAS, has become uninhabitable.”

Venezuela made the decision to leave the OAS in 2017, a process that was, even then, expected to culminate on April 27, 2019. It will be the only nation in the Western Hemisphere absent from the bloc. In Parampil’s estimation, the vote was a “last minute attempt to kick Venezuela’s elected government one last time before it heads out the door.”

Venezuela’s decision to leave OAS came hours after the bloc decided to convene in order to discuss the political situation in Caracas. President Nicolas Maduro had previously warned that he would leave should the meeting take place. Then-Foreign Minister and current Vice President Delcy Rodriguez said at the time:

In the future, Venezuela will not participate in any activity, any event, that promotes interventionism and interference … that only seeks to disrupt the stability and peace of our country … because now we know that this coalition of governments from the region has its sights on the sovereignty of our country.”

Venezuela’s representative was not the only one to protest the decision. Mexican Ambassador to the OAS Jorge Lomonaco warned of it setting a dangerous precedent wherein “a subsidiary body can question, with only 18 votes, sovereign decisions.”

Ronald Sanders, Antigua and Barbuda’s ambassador, gave a similar warning, adding that “it ignores the rules of the Permanent Council” and also the OAS charter.

Correction | A previous version of this article said that U.S. Ambassador to the OAS Carlos Trujillo would revisit the legal justification for the referenced OAS decision at the UN General Assembly, Trujillo was actually referencing the OAS General Assembly. We regret this error.

Featured Photo | Asbina Marin, First Secretary and Representative of Venezuela to the Organization of American States (OAS), center, turns toward Hugo Cayrus Ambassador and Permanent Representative of Uruguay to the OAS, April 9, 2019, as the OAS Permanent Council holds an extraordinary session on Venezuela at OAS headquarters in Washington. Jacquelyn Martin | AP