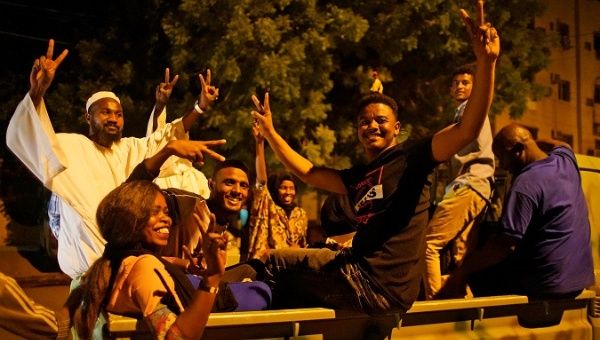 “The second has fallen!” people chanted in the streets overnight as car horns tootled and mobile phones lit up in the darkness in post-coup Sudan.

Sudan’s security and intelligence chief quits Saturday, one day after the defense minister stepped down abruptly as the nation’s interim leader and following the military overthrow of autocratic president, Omar al-Bashir.

Salah Abdallah Mohamed Saleh, known as Salah Gosh, who headed the National Intelligence and Security Service (NISS) and was once the most influential person in the country after Bashir who was in power since 1989, has stepped down from his post.

“The chief of the transitional military council, Abdel Fattah Burhan, has accepted the resignation of … the chief of NISS,” the council said.

The resignation was put forth less than 24 hours after Defense Minister Awad Ibn Auf stepped down as head of the Military Transitional Council (MTC). Ibn Auf was one of the leaders behind the overthrow of Bashir who has been wanted by the International Criminal Court (ICC) since 2009 for war crimes including, ethnic cleansing, in the country’s Darfur region.

Protesters have been demanding faster political change and an immediate end to the military-proposed two year rule by the military itself.

At least 16 people were killed and 20 others wounded by stray bullets at protests and sit-ins Thursday and Friday alone, according to a statement by a Sudanese police spokesman Saturday.

He was the third most senior general in the Sudanese armed forces and is little known to the public. As head of Sudan’s ground forces he oversaw Sudanese troops fighting in the Saudi-led Yemen war and has close ties to senior Gulf military officials.

“The second has fallen!” people chanted, a reference to Ibn Auf and Bashir, witnesses said.

The Sudanese Professionals Association (SPA), which has been leading protests to demand a civilian government, called for more demonstrations Saturday.

“Today, we continue the march to finish the victory for our victorious revolution,” SPA said in a statement.

“We assert that our revolution is continuing and will not retreat or deviate from its path until we achieve … our people’s legitimate demands of handing over power to a civilian government,” said the group.

In order to create a “fully civilian government” by 2021, the Military Transitional Council (MTC) asked politicians to agree on what characteristics such government should have. It was announced Friday that Bashir’s ruling National Congress Party will be allowed to take part in the future presidential polls.

General Abideen announced that the military-led council will not hand over Bashir to the ICC because, they say, he can be tried and prosecuted within Sudan “if the accusations against him are proven.”

Bashir, 75, withstood 16 weeks of demonstrations sparked by rising food costs, high unemployment and escalating state repression. The man who governed Sudan for 30 years. Dozens of people have been killed and tortured since protests began last December demanding his resignation.