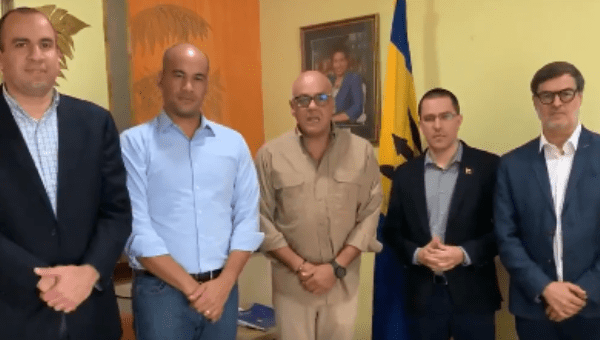 Venezuelan delegates arrived in Barbados to continue dialogue with the opposition facilitated by Norway.

The Venezuelan delegation arrived in Barbados Monday to continue the negotiations with the spokesperson of the country’s opposition.

Jorge Rodríguez, the Vice President of Communication, Tourism, and Culture of Venezuela informed about their arrival on Twitter.

“We have arrived at generous Barbados to continue the dialogue of peace. Together with Pope Francis, we hope that all of us will commit our efforts to the construction of a peaceful mechanism for the settlement of disputes and the aggression against our worthy people will be deactivated,” he wrote.

He also said that the presence of Pope Francis at the negotiating table will help in solving the difficulties between the Venezuelan government and the opposition.

The Venezuelan official also indicated that they trust in the facilitation of the Government of Norway and thanked the hospitality of the people and Government of Barbados.

On July 8, delegates from the government and the Venezuelan opposition arrived in Barbados to continue with the peace dialogue which began in Norway on May 14, a process whose main purpose is achieving a peaceful solution to the political impasse in the South American country.​​​​​​​