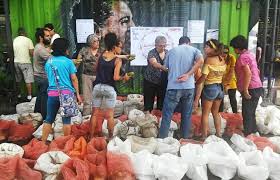 Once a month, 181 families in Caracas, Venezuela, collectively buy tons of produce, directly from a cooperative in Lara state, five hours away. The project, known as Alpargata, shows how the economic crisis is also building solidarity. Mike Fox reports from Venezuela.

MIKE FOX: Once a month, 181 families in Caracas, Venezuela, collectively buy tons of produce, directly from a cooperative in Lara state, five hours away.

The families split the cost and the product, savings thousands of Bolivars, the Venezuelan currency, by cutting out the middle-man.

MARINERA MATOS, Alpargata Solidaria: If we had to buy these items in the market or in the street it would be impossible to afford them.

MIKE FOX: It’s a way of surviving the crisis in Venezuela. A crisis that is NOT humanitarian, but IS rooted in hyperinflation. A crisis where there is more than enough food available, but the price of that food is way too high.

MARIANELA CARILLO, University Professor: When the vegetables arrive, we unload the truck. And each group has the responsibility of weighing and divvying up each item. For instance, today, my group is sorting out the plantains and sweet peppers.

MIKE FOX: They divide up each of the products into 181 groups — one pile for each family. Then the party begins to fill each bag.

They dance and sing, while they pass the fruit and vegetables from one hand to the next, down long rows of people and into each bag. This is where the name of the group, Alpargata Solidaria, comes from. The alpargata are slippers worn when dancing to traditional Venezuelan music Joropo. Solidarity is the economy they say they are building here.

Contrary to the story pushed in most media outlets, the majority of Venezuelans are NOT calling for the ouster of president Nicolas Maduro. They have their criticisms. But many blame the current crisis as much on the U.S. government and private and corporate elites in Venezuela, who have stolen billions of dollars from the country and pushed a black market dollarization of the economy, which is fueling hyperinflation.
MARIANELA CARILLO, University Professor: The people will not turn their backs on this project. We are going to overcome it and if the U.S. invades then they are going to have to face a bunch of Chavistas here, because they are not going to be able to kill us all… Trump, if you come, we’re waiting for you.

MIKE FOX: After hours of work, each family collects a bag, filled with more than 40 pounds of vegetables and fruit. It cost them the equivalent of roughly $6. $6 that, in Bolivars, is a fortune. But it is less than half of what it would cost in local markets. The savings come by buying directly from producers. Other communities are replicating this model around Venezuela.

Emilus Pinto is a professor at the Bolivarian University. She’s been participating in the Alpargata Solidaria since it was founded nearly four years ago. She says she’s careful to make sure this food lasts her family of five at least three weeks.

EMILIUS PINTO, University Professor: With what we pay for this bag – 30,000 bolivars – people here buy four potatoes, a plantain and a couple of bananas, and that’s it. It’s very important. In my family, there’s one rule. You respect the Alpargata.

It’s not just the food, but the aggregate value and the relations with the people. We’re like a big family. It’s like having a big family reunion, once a month.

MIKE FOX: This is how many Venezuelans are resisting the crisis and the violent rhetoric from the United States, which has threatened to invade their country.

They are doing it together, As best they can.