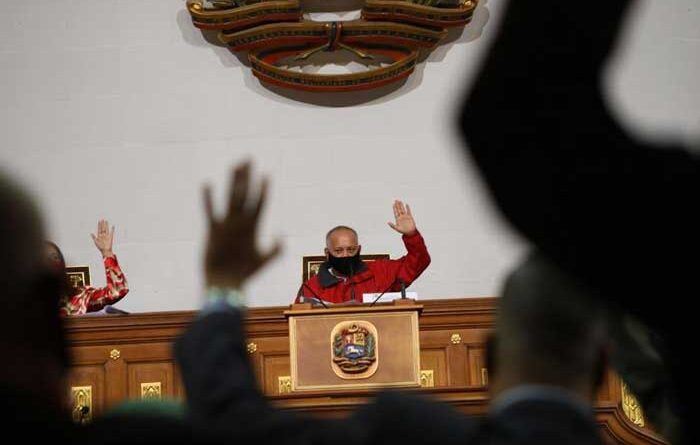 This Thursday, the Anti-Blockade Law for National Development and the Guarantee of Human Rights, proposed by the President of Venezuela, Nicolás Maduro, was approved unanimously

Constituent Maria Alejandra Diaz was the only dissident voice with her abstention. She explained that the last draft was not delivered with enough advance notice to properly study it and vote it. But many criticisms among Chavismo were raised in the national debate on the law.

“A new stage in the life of the Homeland has began,” said the president of the National Constituent Assembly (ANC), Diosdado Cabello, at the same time that he assured that through it, new mechanisms will be designed for financing national public programs in food, health, social security and basic services.

Through a public debate at the ANC headquarters, the three chapters and 44 articles of the legal instrument were approved. The law seeks to give the national government special powers to counteract the blockade and sanctions imposed by the US Government, that many analysts agree in labeling as an unconventional war or a non-declared war affecting million of Venezuelans.

“We have the right to provide tools to President Nicolás Maduro to defend Venezuelans, as in the United States they asked former President Obama for the power to declare Venezuela an unusual and extraordinary threat,” Cabello said.

“All of this is being done to shield us, not only for the critical and political moment, but to shield us against the imperialist blockade from now on, legally, ethically, to shield the nation,” Cabello added.

RELATED CONTENT: Venezuela Moves one Step Closer to Retrieving Gold Seized by the Bank of England

He explained that this Law was proposed as a legal framework with greater capacity for action against unilateral coercive measures, which have caused the loss of $30 billion annually.

“The National Executive may create or authorize new mechanisms or sources of financing in any of its forms,” ​​he said.

The regulation is supported by 90% of the more than 13 million people who responded to a survey available on the Patria system, where the opinion of Venezuelans regarding the US sanctions was consulted through seven questions.

The instrument will be in force from its publication in the Official Gazette and until the sanctions against the country cease.

The process to be followed after the approval is to present the bill to the Council of State so that this body asks the Constitutional Chamber of the Supreme Court of Justice (TSJ) for its opinion on the constitutionality of this Anti-Blockade Law.