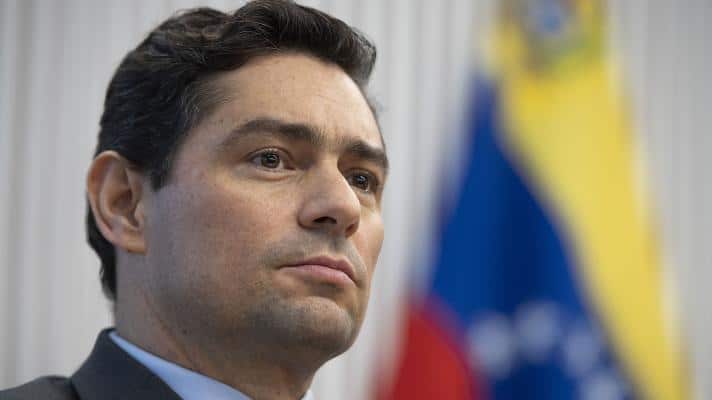 The news was republished by the New York media outlet Bloomberg and disseminated by Vecchio, in an attempt to add verisimilitude and credibility to information that has the features of a propaganda operation to intensify attacks against the Venezuelan government, and specifically against President Nicolás Maduro.

Vecchio employed a narrative aimed at dismissing the serious economic and social effects of the sanctions applied by the US, which in recent weeks have increased their destructive capacity by blocking funds and payment channels for the purchase of vaccines against COVID-19 by the Venezuelan state. To do so, Guaidó’s accomplice appealed to the hackneyed concept of “Maduro’s corruption,” using the same semantic game that, after several years of repetition in the media, tries to impose the allegations as a “consensus” (manufactured) of public opinion.

Thus, Vecchio returned to have his five minutes of fame on social networks. However, the news, so general and lacking verification and evidence that it’s easily assimilated by anti-Chávez elements—reinforcing the beliefs they already hold—is part of a larger dispute over the management of Venezuelan assets abroad.

The information was shared and commented on by Vecchio just hours after the decision of the Delaware court judge, Leonard Stark, to continue the sale of CITGO to comply with a claim from the Crystallex company, pending a modification of the licenses of the Treasury Department to finally authorize the looting of the Venezuelan subsidiary. The case has represented a political catastrophe for Guaidó and the political sector that accompanies him, because his narrative of the “protecting Venezuelan assets” has been dismantled. The weak legal defense of CITGO by the lawyer José Ignacio Hernández—named as fake attorney by Guaidó—who has handled the legal defense of companies that seek to appropriate Venezuelan assets, has been the main cause of the current debacle.

In this sense, the propaganda piece from Switzerland aimed to displace Stark’s decision from public opinion and, consequently, reduce the media impact of the criticism of Guaidó.

However, the information disseminated on the assets allegedly produced by an embezzlement scheme from Venezuela is carried out under a premise of suspicion by the Swiss authorities, since the origin of the funds has not been fully verified, nor their composition. Although the evidence is insufficient and the objectives of the hunt unclear—beyond its obvious political ends—Venezuelan media have spread the news as if it were a closed case.

However, there is a great possibility that the investigation by the Swiss prosecutors is part of the aggressive competition to capture Venezuelan resources abroad by central figures of the Guaidó project, a plot that would also involve the United States, but specifically the aforementioned Vecchio and José Ignacio Hernández.

This has been stated by a financial expert consulted by the editorial team of this platform. In his view, the case to which Vecchio refers “is a lie… I think he is referring to the case of the PDVSA US Litigation Trust, the same case in which he recorded (signed by him without being able to represent him) a dismissal in Miami on the instructions of Ramos Allup.”

In addition, “(José Ignacio) Hernández was also a lawyer for the gangsters and participated in their defense. They have tried to enter the case in Switzerland and were denied participation. In the US they are helping them because a large part of the companies are American or have ties with the US.”

In turn, the expert indicated that Vecchio “does not give details… Vecchio particularly participates in all the tricky deals. That was his conflict with Hernández. He remembers that when Hernández inhibited himself in the Crystallex case, he did so by sending a letter to Vecchio, who has no jurisdiction in judicial matters.” He assured that “he does it because it bothers him that Vecchio reached into the business he ran. They are both puppets of oil companies, but with different teams.”

In this way, the hunt for Venezuelan assets stimulated by the US would have a correlate of internal dispute between figures of the Guaidó project, since both Vecchio and Hernández have mobilized to seize important portions of Venezuela’s assets in alignment with the interests of oil companies aiming at collecting pending bills.

The expert formulated the following regarding the origin and composition of the funds in question: “If not, he’s speculating about the money detected by researchers in Switzerland. But that’s money that was circulated, surely. There you could find lost or stolen money, but also assets from ordinary operations of Venezuela or Venezuelan entities, even private ones. That of the Trust is not cash. It’s an expectation about an eventual lawsuit. What happened is that there were frozen transactions amounting to almost $90 million.”

Seen from the information shared with this platform, declaring the money deposited in Swiss bank accounts as “a product of Maduro’s corruption” would have the purpose of putting pressure on the Guaidó project emissaries to have access to those funds, under the premise that the they would be protecting them from Maduro.

It’s feasible to think that Vecchio has advanced quickly to try to gain an advantage over José Ignacio Hernández, who, although he no longer holds the fictitious position of attorney, has enough information to compromise Vecchio’s movements on Venezuelan money in Switzerland, with the help of the US, and taking advantage of the “anti-corruption” narrative that has justified the plundering of the nation’s heritage outside our borders.

Featured image: Since 2019, Carlos Vecchio has usurped a diplomatic post from Venezuela with the permission of Washington (Photo: Archivo/El Nacional).