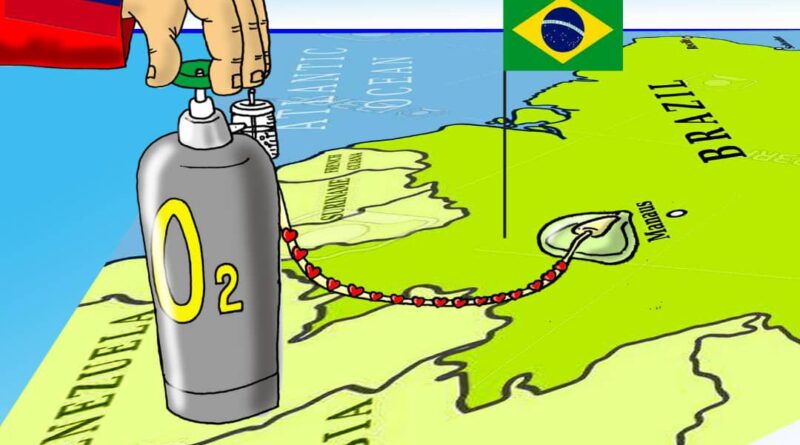 Trucks transporting oxygen donated by Venezuela are expected to arrive in Manaus, capital of the Amazonas state of Brazil, by Monday, January 18. Manaus’ healthcare system collapsed after a recent COVID-19 outbreak.

Correspondent for the multistate television channel Telesur, Ignacio Lemus, published a video on his Twitter account showing the departure of the aforementioned vehicles escorted by police units.

“The trucks with oxygen from Venezuela are already heading to Manaus,” wrote Lemus. “They will arrive on Monday morning at the border with Brazil and then they have to run for 16 hours to reach the capital of Amazonas, which is suffering a healthcare collapse,”

Venezuelan oxygen to alleviate the Covid-19 catastrophe in Manaus (Brasil). This is what HUMANITARIAN AID really is. https://t.co/9PJx0AzaIL

In Manaus there was a re-outbreak of coronavirus that led the governor of Amazonas, Wilson Lima, to decree a curfew of 11 hours a day, as well as restrictions on the circulation of public and private transport.

The city’s healthcare centers are full and have had to transfer patients to other locations by air, due the isolation of the city, located in the middle of the Amazon jungle. Added to this is the shortage of oxygen for the care of patients in serious condition.

Health authorities warned that a new variant of the coronavirus originated in Manaus. This is in addition to those already found in the United Kingdom and South Africa.

On January 2, the government of Japan reported on this new variant, detected in four passengers who arrived in that Asian nation from the Amazon.

Meanwhile neighboring Venezuela, suffocated by the US blockade, and harassed by Europe, US, and some Latin American satellites including Brazil, has put up a heroic fight against the COVID-19 pandemic. Venezuela has recorded 120,444 cases and 1,112 deaths, a rate of 39 deaths per million inhabitants, which pales in comparison to Brazil’s rate of 986 per million, or the US rate of 1,231.