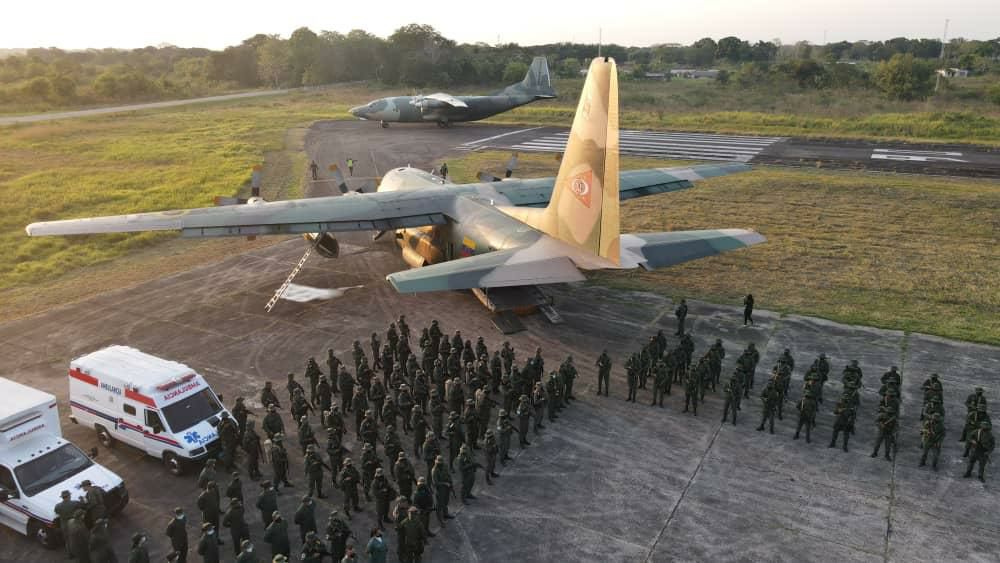 The presence of Colombian paramilitary gangs since last Friday in La Gabarra, a town bordering Colombia in Venezuela’s Apure state, has provoked an immediate reaction by the Bolivarian National Armed Force (FANB) along with local residents, organized by the Simón Bolívar Socialist Communal City. The people and army have responded to the situation with the support of the mayor of Guasdualito, José María Romero, of the United Socialist Party of Venezuela (PSUV).

A group of about 50 men, referred to as Armed Terrorists Colombian Drug Traffickers (TANCOL), were reported on the Colombian side of the border, composed of members from Colombia’s National Liberation Army (ELN), as well as renegades from the defunct Revolutionary Armed Forces of Colombia (FARC), recently been converted into a political party.

The Strategic Operational Commander of the FANB, General Domingo Hernández Lárez, without specifying the exact location, informed via Twitter of an immediate military deployment to confront the violent paramilitary groups.

Residents in peaceful resistance
As for their part, the residents of the Simón Bolívar Socialist Communal City issued a statement, sent to Últimas Noticias through the Bolivar and Zamora Revolutionary Current (CRBZ), in which they expressed their rejection of this invasion that directly affects their daily lives, as well as constituting a violation of sovereignty.

Below is the full statement:

The self-government of the communal city addresses the Bolivarian Government, the National and State Directorate of our PSUV Party, the Venezuelan people and the communal movement to denounce that on January 14, 2022, armed men from the Colombian ELN invaded the Communes La Gran Unión and Víctor Díaz Ojeda, under the pretense of the war they are waging with the so-called dissidents of the 10th Front of the FARC. This constitutes an unacceptable violation of national and popular sovereignty. These paramilitary armed actors intend to bring violence and terror to destabilize peace and democracy and undermine the role of the Venezuelan State, thus doing the work the Colombian oligarchy, which is committed to the North American aggression that is being carried out against Venezuela.

At present, more than 50 armed men have taken over the town of La Gabarra, in the purest style of a foreign army occupation, ignoring the Bolivarian State, popular power and bringing anxiety and terror to the population.

The Venezuelan grassroots and popular power organizations are not part of a war between these armed factors over disputes of drug trafficking routes and border crimes, because that is what is in the background. These disputes have nothing to do with ideology or political projects.

We demand that both armed actors, the ELN and the FARC, take their conflict elsewhere, and that Venezuela, Apure and the Simón Bolívar Communal City is a territory of peace, sovereignty and popular democracy.

If there are 50 or a million armed men it doesn’t matter. They will not succeed against the invincible force of a conscious and organized people willing to defend their homeland from any foreign power that offends it. Regardless if it’s US imperialism, the armed forces of the Colombian oligarchy or the Colombian armed groups.

From the Simón Bolívar Communal City we declare ourselves in peaceful, democratic and patriotic resistance against this invasion of our country.

We call on the entire popular and communal movement to show solidarity with us. We trust the Bolivarian national government and ask for its intervention.

Mayor of Guasdualito on the alert
In response to an anonymous audio circulated by the paramilitary groups, the mayor of Guasdualito, José María Romero, spoke out against the TANCOL group together with the inhabitants of the Simón Bolívar Communal City.