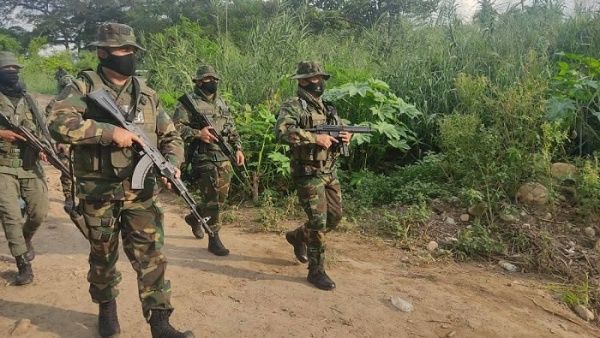 Venezuelan authorities have captured a group of Colombian paramilitaries (TANCOL) in Apure state, on the border with Colombia.

The arrest was carried out by the Bolivarian National Armed Force (FANB), with the aim of securing peace in the region and defending the sovereignty of Venezuela.

It was also informed that the arrested men and women belong to a paramilitary group that the Colombian government calls “Frente 10 of the FARC.” The detained have all been accused of planning acts of terrorism linked with false positive operations in detriment of Venezuela’s stability.

The Venezuelan government has been emphatic in denouncing the incursion of paramilitary groups from Colombia and, for this reason, FANB presence has been reinforced in the border regions of Apure, including the towns of El Amparo, Guasdualito and La Victoria.

Sovereignty and defense
Among the goals proposed for the year 2022, President Nicolás Maduro has pledged the eradication of the presence of paramilitary groups in Venezuelan territory.

Thus, security deployment in border regions has been intensified to counter terrorist acts like those that continue to happen in Colombia. Recently, violent incidents in Arauca department of Colombia caused a number of deaths and displaced tens of families.

Since the first week of January, FANB has been aiding Colombians fleeing the paramilitary violence, in addition to safeguarding the security and integrity of the Venezuelan people.

Defense Minister Vladimir Padrino López has stated that the FANB “has raised its alert level in response to the incidents that have happened in Colombia, in order to protect the people of Venezuela and respond forcefully to any attack on our territory.”