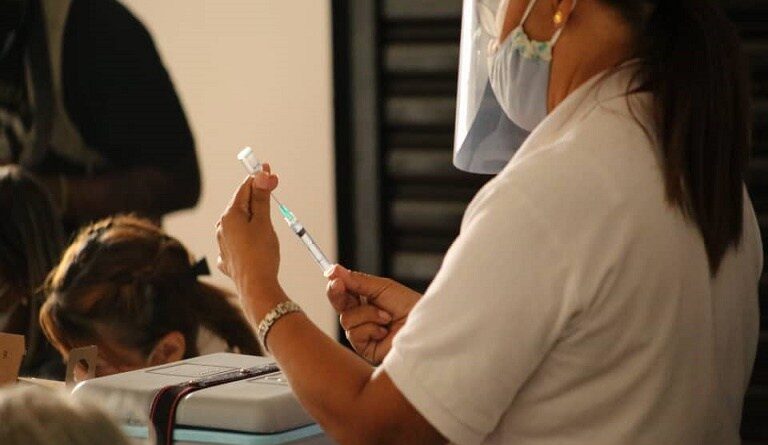 As President Nicolás Maduro had announced on Monday, March 8, the first stage of the vaccination of teachers and professors began in Venezuela.

From the facilities of the Miguel Antonio Caro school, located in the area of Catia, Sucre parish, Caracas, the Minister of Education Aristóbulo Istúriz supervised the start of the vaccination plan through which 100,000 teachers and other employees of the education will be immunized.

The Minister of Education was accompanied at the event by the Mayor of Caracas, Erika Farías, the Head of Government of the Capital District, Nahum Fernández and Deputy Pedro Infante, among other authorities, alongside healthcare personnel and educators.

“This vaccination plan for the education sector will be carried out progressively,” said Minister Istúriz. “The first stage will service 100,000 workers in the education sector, where in addition to teachers we will vaccinate administrative personnel, workers, cooks—all those who work in primary and secondary schools with students.”

He indicated that the vaccination plan for the educational sector began in Caracas, La Guaira and the state of Miranda.

He reported that the vaccination schedule had to be revised to give priority to the states hardest hit by the Brazilian strain, especially those located in the border areas with Colombia and Brazil.

“In Caracas, five large vaccination centers have been set up, where we’ll immunize educational workers through a well-organized, personalized scheme, starting with the educational sectors of the parishes 23 de Enero, El Junquito and Sucre,” said the Minister of Education. “Public and private educational centers will be provided for.”

Professor Istúriz indicated that 1.1 million workers are registered on the payroll of the Ministry of Education alone, of whom 100,000 have already begun to receive the vaccine, “but thanks to the efforts made by President Nicolás Maduro, despite sanctions and blockades, vaccines are guaranteed to serve all educators in the country, health personnel, security officials, and social workers, who are among the front line in the fight against COVID-19.”

“Up to now, the start of face-to-face classes was planned for after Easter, but this measure may be subject to review, taking into account the arrival of this new strain of the virus,” he said. “In conjunction with the Presidential Commission for the Care and Prevention of COVID-19, studies on the behavior of the disease are being carried out in the country, while biosafety protocols are in place, to come to a decision.”

Epidemiological barrier
For her part, the mayor of Caracas Erika Farías indicated that disinfection operations will be reinforced in the capital city, house-to-house visits will be maintained to detect new cases, and awareness campaigns strengthened so that biosafety protocols are observed.

Nahum Fernández, head of Government of the Capital District, said that epidemiological barriers have been activated in the parishes 23 de Enero, El Junquito and El Paraíso, where the first cases of patients infected with the new COVID-19 strain were detected.

The authorities also indicated that security operations are being maintained in which Venezuelan doctors, the Cuban delegation doctors, officials of the municipal and national police, and the National Guard participate jointly.

Featured image: Photo: Courtesy of the Mayor’s Office of Caracas.