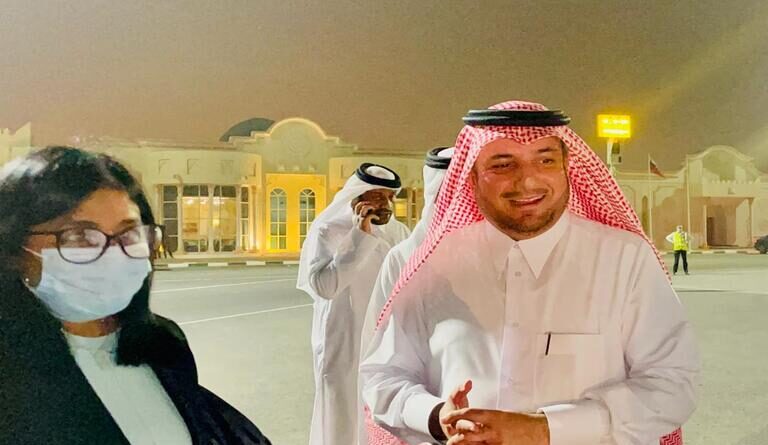 The Executive Vice President of the Bolivarian Republic of Venezuela, Delcy Rodríguez, arrived in Qatar this Tuesday,  June 15, on an official visit with the aim of strengthening bilateral relations between the two countries and addressing other issues of interest related to the bilareal agreements on economy, oil, and customs.

The senior official of the government of Venezuela was received by the Venezuelan ambassador in Qatar, Giuseppe Angelo Yoffreda Yorio. During this visit as part of the Peace Diplomacy promoted by President Nicolás Maduro, Rodríguez is expected to address various issues within the framework of the bilateral agreements that have been signed between the two countries.

Since 1973, Venezuela has maintained diplomatic relations with the Middle-Eastern country at the highest level, with mutual respect, solidarity and cooperation for shared benefit and in order to preserve its sovereignty and self-determination.

These ties were reinforced by the international policy promoted by commander Hugo Chávez Frías during his tenure as president. Today these relations are being reinforced by President Maduro, demonstrating that no obstacles like the unilateral coercive measures imposed by the United States can stop Venezuelan diplomacy.

In addition, the government of Venezuela has signed various agreements with Qatar in the areas of economy, law, sports, and air transport, among others, and has been able to reaffirm the ties of friendship and bilateral cooperation between the nations, maintained by President Nicolás Maduro Moros and the Qatari Head of State Tamim bin Hamad Al-Thani.

Through her official Instagram account delcyrodriguezv, the Venezuelan vice president expressed, on behalf of President Nicolás Maduro and the Venezuelan people, her “good wishes for health and prosperity to His Highness, Emir Sheikh Tamim bin Hamad Al-Thani, and the people of #Qatar.”

Emir Sheikh Tamim bin Hamad Al-Thani held a meeting with Rodríguez at the Al Bahr Palace, where they reviewed the bilateral relations of friendship and cooperation that both nations have maintained for several years, as well as the potential for development on common interest.