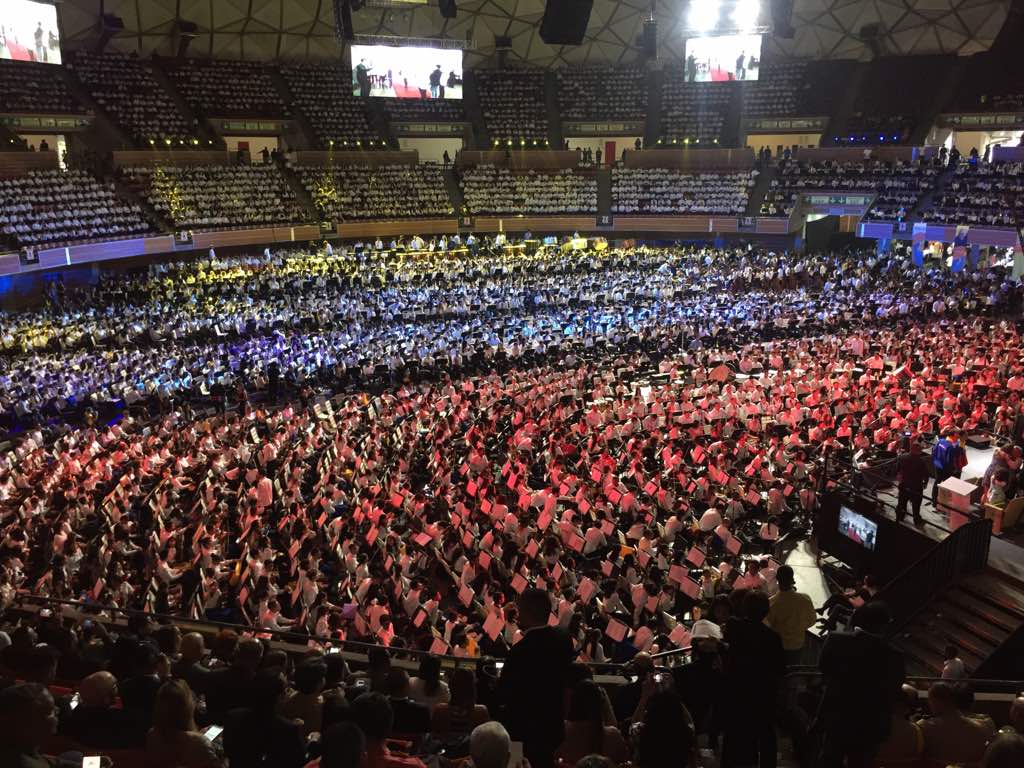 Venezuela's El Sistema musicians playing during a homage to Maestro Abreu, its founder. In 2018. File photo.

This Thursday, November 11, Venezuelan cultural authorities and executives of the world-renowned El Sistema music program announced that the world’s largest symphony orchestra will perform this Saturday, November 15, on the Patio de las Academias, at Fuerte Tiuna in Caracas. Over 12,000 musicians will play simultaneously for at least seven minutes.

The statement was issued at a press conference held by the Minister of Culture, Ernesto Villegas, and the Minister of Information and Communication, Freddy Ñañez, alongside Eduardo Méndez, executive director of the Simón Bolívar Orchestra, and David Ascanio, who will take the baton this Saturday as the conductor. From the Ríos Reyna Room of the Teresa Carreño Theater, Ascanio confirmed that everything is prepared for the performance, and that musicians would act in accordance with relevant bio-safety measures. In addition, the Guinness World Records organization would be on hand to witness the event.

The musicians from El Sistema will try to break the record of the largest performing orchestra in the world, currently held by a Russian group that brought together 8,097 participants in 2019. A total of six conductors will be in charge of the performance, which will begin at 5:00 p.m. and can be followed through the social media accounts of the national orchestra system.

Eduardo Méndez, executive director of the Orchestra, said that “for us it is a matter of great pride to speak about this special topic. In April 2018, a farewell was made to the teacher Abreu, with 10,700 youth who played together, and we paid tribute in El Poliedro de Caracas. On that occasion we decided to contact the Guinness World Records organization. We had already surpassed other records but they asked us for a detailed program, documentation—they are very rigorous in that, they study everything. There was no time to do it immediately, then the pandemic came. However, we continued with the proceedings, and sanitary measures had to be complied with. Two and a half months ago we took up the idea again.”

“The musical piece we are going to perform is ‘The Slavic March’ by master Pyotr Ilyich Tchaikovsky, a piece that lasts approximately 12 minutes,” added Méndez. “It is difficult to play, and we will have that challenge to fulfill. This work was chosen by an academic council. It complies with the requirement that it be performed together, and every child who has been in the orchestra has played it at some point. The musicians have been rehearsing it in their states for more than two months. Today they are all moving to Caracas to enjoy this great event.”

Conductor David Ascanio was thankful for the opportunity to lead 12,000 girls and boys in this event: “Tomorrow we have the rehearsal, and we will also play other songs for the enjoyment of the whole country. From a very young age, I have been a member of El Sistema, and I am proud to be a part of it.”

Minister of Culture Ernesto Villegas commented that “it has to be a successful attempt. Venezuelan culture is closing 2021 in high gear, we are in full FILVEN, the World Poetry Festival has just ended, in addition to the 4th Biennial of the South that takes place in Venezuela, and then on the 15th the Carabobo: Camino de Libertad television series begins to be broadcast. It is a vital sign for Venezuela that these events are taking place at the end of the year.”

In addition, Minister for Information Freddy Ñañez said that “it has been a real challenge that the Bolivarian Revolution has assumed, with this orchestra system greatly increased under the government of Commander Chávez. In these 20 years it has given the country much satisfaction. In addition, we have fulfilled all the necessary requirements that they have requested. We are adequately preserving the sanitary measures of all participants—transport, accommodation and the necessary logistics.”

UPDATE: This piece was corrected on Friday, November 12 at 9:21 pm Caracas time. The day of the concert was changed from Sunday (as initially stated by Alba Ciudad) to Saturday.