The events in tribute to the 200-year anniversary of the triumphal entry of the Liberator Simón Bolívar into Caracas, after his victory in the Battle of Carabobo, culminated this Tuesday with a spectacular Bicentennial Gala held at the Military Academy in Caracas. More than 400 musicians from the groups of the National System of Children’s and Youth Orchestras and Choirs participated in the ceremony, as well as 73 traditional dance artists. The event culminated with a 3D mapping projected on the walls of the Academy, recounting the events before, during and after the Battle of Carabobo, with live orchestral music.

Cultural performances from all over the country were part of the gala to display the cultural diversity of Venezuela. Parranderos of San Pedro, Burriquitas, drums from the coastal regions, Madamas of El Callao and other traditional performers were all present in the ceremony, representing various musical genres of the Venezuelan people.

Venezuelan President Nicolás Maduro thanked all the artists and musicians of the Simón Bolívar National Children’s and Youth Orchestra who participated in the event of tribute.

“I consider that it was a show of the highest artistic level, of international quality,” remarked the president. ”Really, congratulations, to the Simón Bolívar Children’s and Youth Symphony Orchestra created by the conductor José Antonio Abreu. I remember Maestro Abreu today, listening to his orchestra—Maestro Abreu, founder and soul of the Simón Bolívar Orchestra, was one of the greatest Bolivarians that Venezuela has ever had.”

The president recalled the artist who promoted this emblematic social and musical project, uttering words of thanks for having known him in life. ”I give thanks to life for having known him [Abreu] ​​in life, for knowing his spirit, his love for Bolívar, for Venezuela; that love that he left in this orchestra,” said Maduro.

The Head of State was accompanied by the Executive Vice President Delcy Rodríguez; by his wife, the National Assembly Deputy Cilia Flores; the Minister for Defense General Vladimir Padrino López, and the Strategic Operational Commander of the Bolivarian National Armed Force (CEOFANB) Admiral Remigio Ceballos Ichaso.

The President received a national flag from a young girl, Nicolt Mikaela Marín Aquino, and said, “I receive this beautiful flag, the flag of Gran Colombia, the original, the big one, that of Bolívar. This flag represents the union of all the human forces of God, of the Homeland, in these wonderful times, as a symbol of this eternal pact of love.”

“Before waving this flag that you give me, as a symbol of an eternal pact of love for the greatness of Venezuela, I want to congratulate all the artists, musicians, actors, singers, soldiers, everyone,” continued the president. “Our applause, our love and our thanks. Today we have held events to commemorate 200 years since the triumphant arrival of our beloved Liberator Simón Bolívar to his hometown,” following his victory in the Battle of Carabobo that earned him the name of The Liberator.

RELATED CONTENT: President Maduro: ‘I Wish All Parties Allow Their Bases to Choose Their Candidates as PSUV Has Done’ 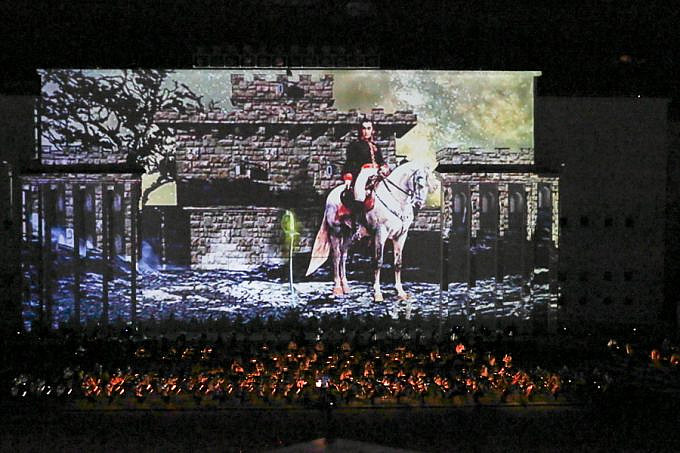