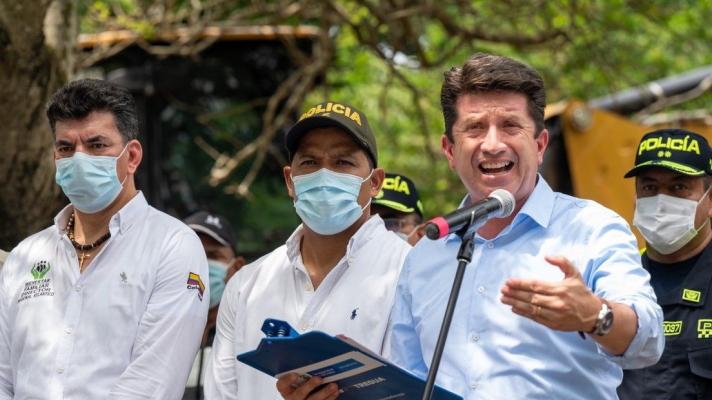 Colombian Minister for Defense Diego Molano giving a speech. In May, the Colombian defense minister accused Russia of a cyber attack. Everything was a staging to justify cyber patrol against National Strike protesters. (Photo: File).

Colombia’s Foundation for Freedom of Expression (FLIP) stated publicly that the nation’s Ministry of Defense faked a cyber attack on official accounts to justify its cyber-patrol policy during the massive national strike that shook Colombia in the months of April and May.

“These actions undertaken by the Ministry of Defense and the military forces, in which more than 21,000 hours have been invested, have not had any counterweight or institutional control, and are expanded amid lies and opacity,” stated FLIP.

The national security institution used videos and social media posts, as well as cyber patrols and online surveillance strategies, to fabricate the false accusation of a cyber attack.

The FLIP investigation concluded that on May 6, Colombian security forces began to issue alerts about an alleged cyber attack on their social media accounts, which was staged in order to justify the subsequent surveillance applied by the authorities.

After the simulation, the government of Iván Duque launched a campaign on social networks using the hashtag #ColombiaEsMiVerdad. In it they warned about supposed fake news that attacked the image of the military forces. The campaign attempted to discredit human rights organizations, and discourage accounts and outlets from publicizing the widespread cases of repression in the streets during the Paro Nacional [national strike].

FLIP concluded that the Ministry of Defense hired the company Alotrópico SAS for almost 900 million Colombian pesos (about $240,000 dollars) to manufacture the cyber attack. FLIP asked nine organizations for information on how the “cyber patrols” are being carried out, and expressed concern about the information it received.

It should be recalled that at the time of the accusations, the Defense Minister Diego Molano, in an interview with the Spanish media outlet El Mundo, said that the cyberattacks had been carried out from Russia, in response to a question by about foreign interference in social networks.

In an interview with the Colombian outlet El Tiempo, the minister also said that there was information about cyberattacks from Russia. The Russian embassy in Colombia responded this way:

“We completely reject these accusations. These serious accusations against our country, which we consider completely unfounded and without concrete proof, do not contribute at all to the development of the traditionally friendly relations between Russia and Colombia.”

Featured image: Colombian Minister for Defense Diego Molano giving a speech. In May, the Colombian defense minister accused Russia of a cyber attack. The attack was fabricated in order to justify cyber patrol against participants in the national strike. (Photo: File).