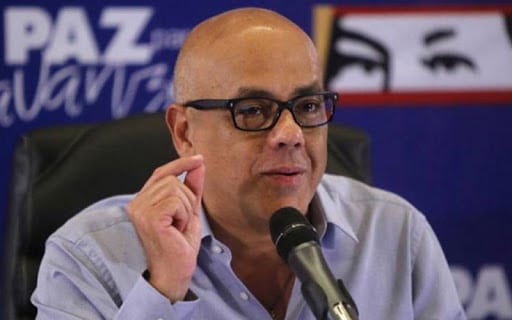 The PSUV campaign head for the upcoming parliamentary elections in Venezuela, Jorge Rodríguez, assured that the information disclosed about the alleged arrest of a worker from the Spanish embassy in connection with the escape of the far-right Leopoldo López is false.

“Complicity is obvious, it is necessary to open a criminal investigation, so some people were interviewed and they said some very interesting things about the relationship that the ambassador had with López that will come to light soon, and about his life style while in the embassy… I subscribe entirely to the opinion of Diosdado Cabello about Leopoldo López: coward, liar,” Rodríguez said, commenting that “he abandoned the tiny group who are still following him down to hell, and he went to live the life of an oligarch in Madrid, like many in the anti-Chavista leadership.”

“He called on people to commit acts of violence, he’s responsible for the guarimbas of 2017, the coup of last April 30, it’s good that the government of Spain will have fun with that man,” he said. He considered the flight of the Popular Will leader as an act of cowardice. This weekend López fled to Colombia and then Spain with the complicity of the Spanish diplomatic mission in Venezuela.

López left the ambassador’s residence, where he was staying as a “guest” after violating his house arrest measure on April 30, 2019, following his sentencing for crimes committed as part of the violent 2014 operation La Salida. At the beginning of 2020 López planned the mercenary attack Operation Gideon, a terrorist action in which US mercenaries participated, whose objective was to assassinate President Nicolás Maduro.

RELATED CONTENT: President Maduro on Bloomberg’s Fake News About Jorge Rodríguez: “He Is Preparing My Departure, But to the Beach”

The Bolivarian Republic of Venezuela, through a statement, denounced the Kingdom of Spain this Sunday for violating the Vienna Convention by participating and acting as an accomplice in the escape.

“We are going to wait, we are going to wait,” Rodriguez answered when asked by Últimas Noticias if it was true that he held meetings in Mexico last week with Richard Grenell, the former acting U.S. director of national intelligence and ambassador to Germany. Rodríguez completed his answer by recalling that in the United States politicians often respond “no comment” to certain questions formulated by journalists.

Bloomberg claimed last week that the exit of President Maduro was being negotiated by Grenell and Rodríguez, to which the Venezuelan head of state responded ironically: “yes, Jorge Rodríguez is negotiating my exit, but to the beach.” In addition the US propaganda outlet mentioned that Secretary of State Mike Pompeo wasn’t aware of the meeting, and that it was an initiative of the White House and the National Security Advisor’s office.