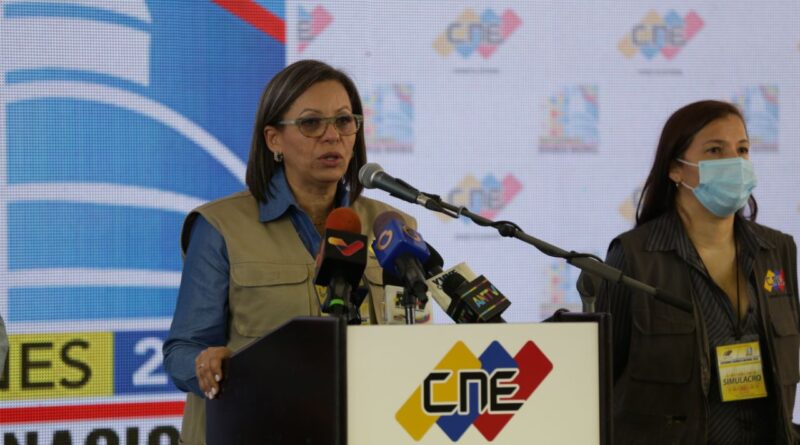 The president of the National Electoral Council (CNE), Indira Alfonzo, highlighted the successful completion of the voting drill this Sunday, with 100% performance of the operating system and full compliance with all the protocols established for the event. The rector stressed that the drill had a massive turnout, was successful and exceeded the expectations proposed by the CNE.

Alfonzo considered that this Sunday’s session was “massive and highly successful and has far exceeded the expectations that we had set ourselves in the CNE.” Given the high influx of participants in this electoral exercise, the voting centers that still had people waiting to exercise their right to participate were kept open.

This electoral exercise had the participation of 100% of the technical and operational staff in the 381 voting centers arranged throughout the national territory, with 945 polling stations, which will continue to be held as a permanent activity to allow voters familiarize themselves with the voting system.

She highlighted the performance of the new voting machines, which “even when subjected to various tests and coupled with the large number of voters who decided to participate throughout the day, their operation was efficient, effective and guided by the principles of transparency, reliability, equality, equity, and popular participation, provided for in the Venezuelan Constitution.

The official stressed that the Electoral Power was in charge of guaranteeing security measures in the voting centers, in accordance with the strategic biosafety plan for polling station members, CNE workers, Plan República, and voters. “Coordination of logistics between the State entities, members of the National Logistics Committee, such as CEOFANB, CANTV, Movilnet, the fire department, Civil Protection, the Ministry of Education, the Ministry for Health, among others, were put to the test, demonstrating once again the impeccable synchronization between all the agencies,” she added.

She also reported that the contingency plans were evaluated, as well as the knowledge of the operators. A national support center and twenty-hour rapid attention centers were installed in different states. “The voters have been allowed to come closer to the system. The response has been massive and this demonstrates the will and democratic vocation of the Venezuelan people, ”Alfonzo highlighted.

She congratulated and thanked the participants in the electoral drill this Sunday; both the entities of the National Logistics Committee as well as CNE workers, organizations with political purposes, and voters. “This civic and technical exercise of citizen participation allows us to evaluate our work, motivates us, but also pushes us more to continue guaranteeing all the technical, logistical and sanitary conditions so that the Venezuelan people can continue to exercise their sovereignty”, concluded the president of the CNE.

While the massive participation of Venezuelans in the voting exercise was seen as a success, many complained about long lines and long waiting times. Some people declare to Orinoco Tribune that they were in line in Los Ruices (Caracas) for more that five hours and decided to go home, another citizen went as far as saying that he had waited in line for three hours and after all that time, he was further from the entrance than when he arrived, because of the preferential entrance for the elderly.

Orinoco Tribune took the opportunity to visit some voting centers, and also did an analysis of photos posted to social media networks, noting an unacceptable relaxation of social distancing measures. “It was great to see a lot of people participating in the drill, it was also nice to see all the people wearing face masks, but it was shocking to see how people in lines did not respect the 1.5 meters (minimum) of social distancing advised by the WHO and Venezuelan authorities. More security presence will be needed on election day and the COVID-19 social distancing campaign needs to be redoubled in order to avoid a spike in coronavirus cases in Venezuela—which has demonstrated overall a wonderful strategy to fight COVID-19,” said Jesus Rodriguez Espinoza, editor of Orinoco Tribune.