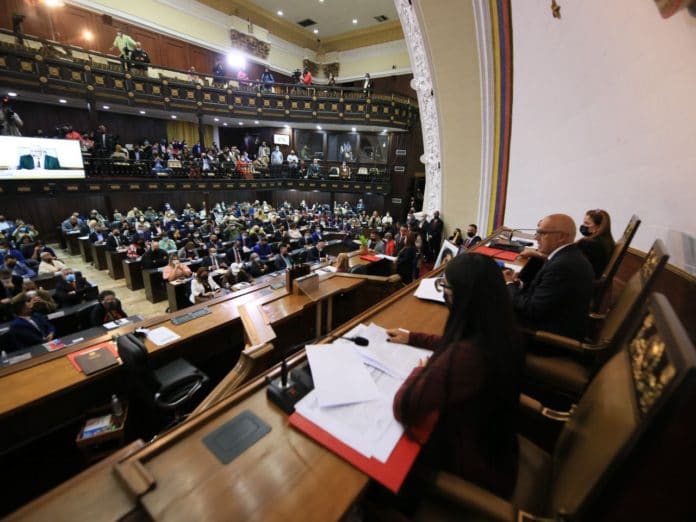 30 new justices, the General Inspector of Courts, and the director of the School of the Judiciary were sworn in.

This Tuesday, April 26, 42 magistrates were appointed to the Supreme Court of Justice (TSJ) by the National Assembly (AN). After evaluating candidates from civil society, the new judges were approved by a qualified majority in the plenary session held on Tuesday.

PSUV Deputy Giuseppe Alessandrello, president of the judicial nominations committee, was in charge of announcing the candidates for approval by the AN.

“This is a transcendental act in the political life of this country, and in all its institutions,” Alessandrello said.

He recalled that 434 citizens applied. “In the end, we issued a list with 271 candidates,” Alessandrello added.

In addition, information was requested from the various agencies of the Venezuelan State, such as SAIME, SENIAT, SEBIN, the Comptroller General of the Republic, and CICPC, among others.

Deputy Alessandrello indicated that, after filtering the list, a total of 271 citizens were selected. This list was sent to the [department of] Citizens’ Power, which eliminated four candidates. The final list was presented to the National Assembly.

The president of the National Assembly (AN), Jorgé Rodríguez, commended the election process.

“Let us stand up and applaud the Judicial Nominations Committee, that in a conscientious, wise, magnanimous manner, directed the evaluation process, receipt of credentials, interviews, and analysis that have led to the proposal that is on the table today,” Rodríguez told the press.

Below are the new members of the TSJ:

Director of the National School of the Judiciary:
• Guillermo Blanco